It was studied that ornithine transcarbamoylase played important roles in ethyl carbamate (EC) formation. Ornithine transcarbamoylase (OTCase) can degrade citrulline, a precursor of EC, through arginine deiminase pathway. Therefore, they are generally added to regulate EC catabolism in rice wine fermentation. In this work, OTCase were added in different concentration and ferment time. It turned out addition of OTCase could reduce EC to some extent, especially for low concentration enzyme addition and mid-stage addition time. Furthermore, the production of amino acids, volatile flavor compounds and sense of taste were not markedly affected. The discoveries reveal that EC can be reduced by supplying OTCase while rice wine leavening.

Ethyl carbamate (EC or urethane), which has a potential carcinogenic effects on animals and humans, exists widely in various fermented foods and alcoholic beverages such as grape wine, Chinese yellow rice wine etc (Lachenmeier et al., 2005; Madrera & Valles, 2009; Fu et al., 2010). With the ever-growing demand for beverage consumption and internationalisation of Chinese rice wine, more attention should be paid to the safety, especially to EC.

One of the most common precursors of EC is urea that can be formed by arginine degradation in yeast cells or existed in raw materials. Another precursor is citrulline, an intermediate of arginine degradation that occurs by the arginine deiminase (ADI) pathway in wine lactic acid bacteria (LAB) strains (Liu et al. 1995) which has also been proved to contribute as equal as urea to the accumulation of EC in wine (Liu et al. 1994; Mira de Orduña et al. 2000).

Wine companies have seeking different techniques to eliminate EC formation, among which enzymatic decomposition methods have attracted increased attention. Until now, there are two enzymes have been widely utilized, namely urease and urethanase, which can directly target at urea and EC, respectively (Yang et al., 2010; Fidaleo et al., 2006; Mohapatra & Bapuji, 1997; Chun et al., 1991). While there is barely research has focused on the ornithine transcarbamoylase (OTCase), an enzyme which can decompose citrulline during ADI pathway as shown in Fig.1. 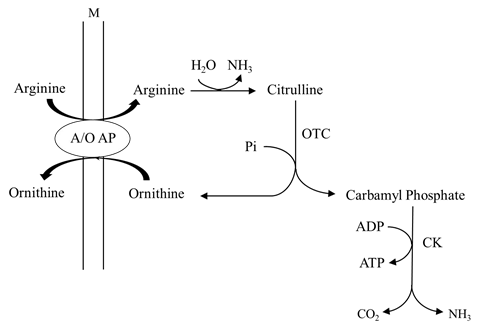 Research on OTCase usage in Chinese Rice Wine was found to be limited. Previous researches were focused on OTCase deficiency on human, an OTCase enzyme deficiency leads to decreased production of citrulline, interruption of the urea cycle, increased orotic acid which is produced by excess carbamoyl phosphate, and ultimately life-threatening hyperammonemia due to the inability to excrete excess nitrogen (Christan et al., 2017; Brassier et al., 2015). According to our prior research, OTCase had a negative relationship with EC content, which suggested that it may have an inhibition effect on EC formation (Fang et al., 2015; Fang et al., 2019). However, there is no direct relationship between the OTCase and EC.

Herein, this research was targeted at cloning OTCase which generated from Lactobacillus brevis, added directly into the wine fermentation process after enzyme purification. Interestingly, it was found that the addition of OTCase made little influence on amino acids, volatile flavor compounds and sense of taste but significantly reduced the content of EC, especially for low concentration enzyme addition (LC) and mid-stage addition time (12D).Thus, we developed a novel and practical method to inhibit EC during rice wine fermentation process through the low concentration addition of OTCase at the 12th day of fermentation.

Genomic DNA was extracted from Lactobacillus brevis. Primer sequences were as follows:

5’-cgcggatccATGACTAAGGATTTTCGGGAAAATGTA-3’ (underline was recognize as BamHI), 5’-acgcgtcgacTTAAGCTCGTGGAATGAATAAGTTACCT-3’ (underline was recognize as SalI). PCR procedure was set as: pre-denaturation for 5min at 98°C, 30 cycles of denaturation at 98°C for 20s, annealing at 58°C for 15s, extension at 72°C for 90s, and a final extension at 72°C for 7 min. The PCR products were purified after electrophoresis. By using restriction enzyme BamHI and SalI to degrade both PCR purification product and plasmid pET28a, T4 ligase was applied to ligate them together so as to form the recombinant plasmid pET28a-OTC.

The recombinant plasmid pET28a-OTC was transformed into E.coli BL21(DE3). To express the recombinant OTCase, a successfully cloned single colony was picked and inoculated into 5 mL LB medium by shaking at 220 rpm at 37°C overnight, and then transformed into 200 mL LB broth by shaking at 220 rpm at 37°C for 2-3 h until OD600 was reached 0.6-0.8, IPTG was added to induce expression of the enzyme. After fermentation, cells were harvested by refrigerated centrifugation and resuspended in 30 mL buffer (50mM NaH2PO4, 300mM NaCl, 20mM Imidazole, pH 8.0). Next, cells were disrupted by ultrasonication to extract the enzyme and cell debris were removed by high speed refrigerated centrifugation. The crude enzyme purified by Ni-NTA Superflow Column eluted with a gradient of imidazole (20, 50, 100 and 250 mM) in 50mM NaH2PO4 and 300mM NaCl. The analysis of purified protein was carried out by SDS-PAGE, and protein concentration was determined by method of Bradford protein assay.

EC content was determined by a previously described method (Fang, Dong, Xu, He, & Chen, 2013; Fu et al., 2010). Urea and citrulline were quantified by spectrophotometry according to the methods of Fu et al. (2010) and Boyde and Rahmatullah (1980), respectively. OTCase activity was detected by Carrasco et al. (2003).

As shown in Fig. 2, LC and 12D was beneficial to EC level reduction. The level of EC in low OTCase concentration group (LC) was significantly lower than most groups include control group and remained stable the whole fermentation process, while the higher EC content was observed in the high OTCase concentration group (HC). As for different enzyme addition time, the EC content in mid-fermentation time (12D) significantly exceeded that in early fermentation time (5D) especially after 12 days of fermentation. However, the reason why HC and 5D group have higher EC rather than control group remained further research, maybe because they have induced EC precursors in some extent. 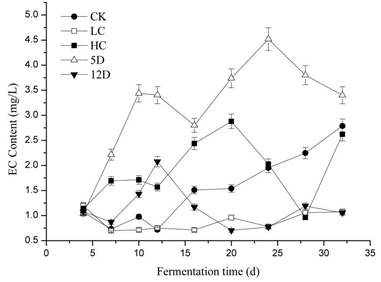 Fig.2. Variation of EC content in different treatments during the processing of Chinese rice wine

In general, LC and 12D group could inhibit EC formation prominently, i.e., the EC content at 20 days of fermentation could be decreased to 20% as the naturally fermented wine.

Urea is the major precursor of EC produced by yeast in traditional Chinese rice wine (Fang et al., 2013), therefore, to reduce the accumulation of urea could decrease EC concentration. 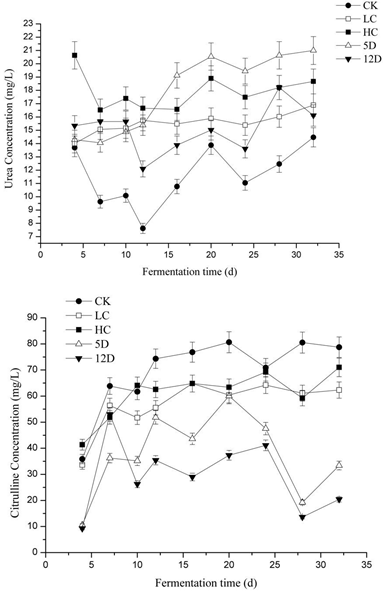 Fig.3. Variation of urea and citrulline content in different treatments during the processing of Chinese rice wine

Comparing the experimental groups with the control in Fig.3, all experiment groups showed more favorable effect on higher levels of extracellular urea in fermentation broth, thus the amount of urea available for generating EC was lower. This conclusion is in accordance with the result in Fig. 2 except for 5D group. This maybe because adding enzyme at an early stage may induce the formation of EC precursor.

During 35 days of fermentation, extracellular citrulline level shows a different trend than that of urea. OTCase is the enzyme which degrade citrulline into ornithine. As a result, control group (CK) produced the highest amount of citrulline than experiment groups, which in accordance with the variation of Fig.3. Meanwhile it can be assumed that middle concentration of OTCase have better degradation effect of citrulline even than high concentration group.

3.3 Effect of different treatments on OTCase during the processing of rice wine

Arginine is one of the major amino acids found in grape juice and wine (Lehtonen, 1996). Degradation of arginine by wine LAB occurs via the arginine deiminase (ADI) pathway (Liu et al., 1996 &1998). It involves three enzymes: arginine deiminase (ADI), ornithine transcarbamoylase (OTC) and carbamate kinase (CK). According to our prior report (Fang et al., 2015), the increase in OTCase could lead to the reduction of extracellular EC. It can be seen from Fig.4 that LC group ranked the highest while CK stayed lowest because of no OTCase addition which in accordance with EC variation in Fig.2. At the pre-fermentation stage, OTCase activity increased until reached the peak, then fluctuated during the following days. That is mainly because OTCase was activated by arginine in the beginning. The rapid growth of microbes in rice wine resulted in substantial arginine consumption and therefore, OTC activity should be decreased until a relatively steady level was reached. While addition of OTCase break down the balance as a result the curve started fluctuated. Overall, OTC activity was negatively correlated to EC production in accordance with our prior conclusion (Fang et al., 2013). 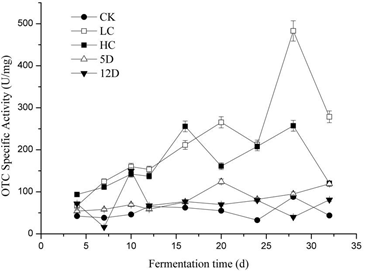 Fig. 4. Comparison of OTCase specific activity in different treatments during the processing of Chinese rice wine

Chinese yellow rice wine is known as ‘Liquid cake’ which contains various bioactive components such as amino acids (Niu et al., 2008). Fig.5 showed amino acids variations in different treatments of rice wine. The amino acids in LC group were almost higher than the control group except for hydroxy and acidic amino acids. While the other experimental groups showed reduction as compared to CK. The result indicated that adding low concentration of OTCase promoted more amino acids formation than other treatments. 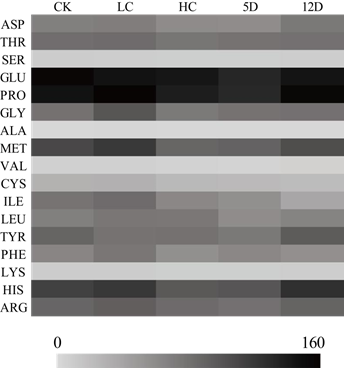 Fig. 5. Comparison of amino acids in different treatments during the processing of Chinese rice wine

Aroma is a crucial determinant factor of rice wine quality and is dependent on various volatile flavor compounds formed during fermentation process (Chen, Xu, & Qian, 2013). In this study, thirty flavor compounds were identified by SPME-GC-MS. Table 1 only listed major eight flavor substances. There were high levels of alcohols, esters existed in rice wine, while some phenols, organic acids, carbonyl compounds and nitrogen-containing compounds were also presented at low concentrations. According to Table 1, the major aroma compounds were isoamylol, isobutanol, phenylethyl alcohol, benzaldehyde, Ethyl caprate, diethyl succinate, ethyl octanoate and ethyl palmitate. It was obvious that alcohol content of all experimental groups was higher than that of the control group. It is worthwhile mentioning that phenylethyl alcohol is an important compound with a rose-honey-like pleasant flavor which is favoured by consumers. Benzaldehyde is the most widely used aromatic aldehyde in food industry, here we could see OTCase addition can benefit benzaldehyde production. Besides, esters were also important aroma compounds found in all groups. Interestingly, key ester compounds in experimental groups were higher than control group. In general, the addition of OTCase displays a potential ability to induce aroma formation.

Electronic tongue systems have been developed for taste measurement which include sweetness, bitterness, sourness, saltiness, richness, umami, astringency and aftertaste.

The radar plot of Fig.6 presents taste impression towards different treatments of rice wine. The curves were overlapped to a great extent which means there was no obvious difference in the overall taste. Only for saltiness all experimental groups were a little higher than the control group. 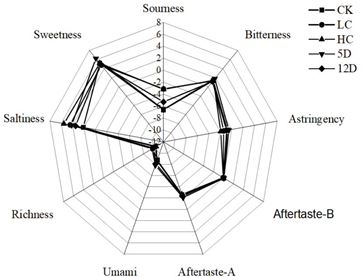 In the present work, we found that the addition of OTCase made little influence on amino acids, volatile flavor compounds and taste analysis but significantly reduced the content of EC, especially for low concentration enzyme addition(LC) and midstage addition time(12D).Thus, we developed a novel and practical method to inhibit EC during rice wine fermentation process through the low concentration addition of OTCase at the 12th day of fermentation. However, the EC inhibition effect is not perfect, so the future study may focus on modification of OTCase.

This work was financially supported by the Natural Science Foundation of Zhejiang Province, China (No. LGN19C200004, LQ18C200003).