Azoxystrobin, boscalid, cyprodinil, fludioxonil and pyraclostrobin are fungicides commonly used in Argentina against different fungus contaminations in the blueberry field. The presence of these fungicides was investigated in 50 samples of blueberry fruit and 15 samples of blueberry juice purchased in Argentina. Fungicide residues were determined by solid-phase microextraction (SPME) coupled to gas chromatography with micro-electron capture and nitrogen phosphorous detector. The average concentrations of azoxystrobin were 48 ?g/kg in blueberry fruit. Average of boscalid were 43 and 239 ?g/kg, of cyprodinil 1581 and 852 ?g/kg, of fludioxonil 1077 and 2842 ?g/kg, and of pyraclostrobin 578 and 3414 ?g/kg, in fruits and juice respectively. The higher concentrations of fungicides were found in those cases where the time between the application of the compound and the fruit’s commercialization was shorter than the fungicide’s half-life.

Highbush blueberry (Vaccinium corymbosum L.) is a small fruit that belongs to the Ericaceae family. Entre Ríos province is the main production area of Argentina, with more than 50% of the blueberry fields located in Concordia Department (lat 31°23′32″S, long 58°1′1″W), and represents more than 50% of the blueberry local production, followed by Tucumán and Buenos Aires (Bruzone, 2010). Approximately the 90% of the Argentinean production is exported as fresh fruit, principally to United States, Canada and European Union in their winter season.

This fruit has high levels of nutrients that are beneficial for health and that is the reason for their consumption increased in the last years (Lau, Shukitt-Hale & Joseph, 2007; McDougall, Ross, Ikeji & Stewart, 2008). These nutrients combined with a high water activity and low pH value, make lueberries particularly susceptible to fungal spoilage and the use of fungicides is a common practice in the field.

Depending on some factors such as their physico-chemical properties and blueberry post-harvest treatments, some of these fungicides can be also found in the final commercial product. The concentration of these pesticides in the berries is limited by legislation. For example, in Europe, the Regulation (EC) N° 396/2005 establishes maximum residue limits (MRLs) of 5.0 mg/kg for azoxystrobin, 10.0 mg/kg for boscalid, 5.0 mg/kg for cyprodinil, 3.0 mg/kg for fludioxonil, and 3.0 mg/kg for pyraclostrobin. However, despite of being a direct exposure source to consumers, MRLs of these fungicides for blueberry juice are still scarcely regulated. Thus, in order to establish future legal measures, it is mandatory to perform both monitoring and toxicological studies to assess the background levels of these chemicals in different juices and to evaluate the chronic exposure of consumers to these contaminants, respectively.

The time between the last application of the fungicide and the harvest, that is normally recommended by the commercializers of agrochemical compounds and used in the field, is a very important parameter that needs to be considered before consuming blueberries, because otherwise, could be associated with health problems (Agrosiembra, 2012; SENASA, 2012).

Although there are a lot of new reports about pesticide residues in unprocessed and processed products (Gérez et al., 2015), there has not been developed a study of contamination of fungicides in blueberry fruit and juice samples produced and/or marketed at least in Argentina. And there are not studies about the relationship between the fungicide application and the time until harvest, and the occurrence of these compounds in the final product.

The aim of the present study was to evaluate the concentration of these five fungicides in blueberry fruit and juice commercialized in the main supermarkets of Argentina.

The sample size should be of 1 kg for fruit and 0.5 l of juice to fit the European Norm EC (2002), so 8 packages of fruit and 1 bottle of juice were bought to have a representative sample. Samples were kept in their original packages, properly identified, and stored under freezing condition (-18 ± 1°C) until the analyses.

The extraction procedure could be summarized as follows: 10 g portion of fruit or 3 g of juice was weighted in a 25 ml centrifugal tube and extracted with 10 ml water. The solution was vigorously shacked in vortex mixer during 1 min. The pH was adjusted to 5.0 for pyraclostrobin and 7.0 for the other fungicides with sodium hydroxide. Then, samples were centrifuged at 3000 rpm during 15 min. Then, the supernatant was filtered with 0.2 mm filter in a vacuum maninfold. The extraction was repeated one more time. The procedure was made in triplicate.

Quality assurance of the method

The presence of matrix effect was observed because of the difference between the standard and spiked samples curves slopes. The ANOVA test showed that there were statistically significant differences (p<0.01) for both cases. For that reason, the standard addition method was recommended for quantification studies. The performance characteristics of the analytical method obtained from spiked blank samples are presented in Table 1. The results showed a good linearity with regression coefficient of 0.9965 for azoxystrobin, 0.9975 for boscalid, 0.9997 for cyprodinil, 0.9998 for fludioxonil and 0.9990 for pyraclostrobin, respectively.

The repeatability of the method was determined by performing ten replicates of a single extracting solution from cyprodinil and fludioxonil spiked blueberry samples. The relative standard deviations (RSDs) obtained were lower than 10% in all cases. These values indicate that the precision of the method was satisfactory for control residue analysis (Table 1).

LOD and LOQ were calculated as three and ten times the signal-to-noise ratio, respectively (Table 1). These values satisfy the MRL established by the EC and means that the method is sufficiently sensitive.

Blueberry fruit and juice samples were spiked with 0.05 ppm of azoxystrobin, boscalid, cyprodinil and fludioxonil; and 0.5 ppm of pyraclostrobin, and ten replicates of each concentration were performed. The comparison of two independent samples was performed using the Statgraphics Centurion XV. Averages, medians, standard deviations and distributions of blueberry fruit and juice spiked samples were compared. There were not significant differences between both matrixes. For this reason, the same analytical method was used to blueberry juice.

Averages and medians were calculated replacing the not detected values by zero, and are shown in Tables 4 and 5. The half life of each fungicide in two blueberry varieties (Emerald and Jewel), and the time between the last application of the fungicide and the harvest, are shown in the same tables (Munitz et. al. 2013a, 2013b, 2014). The fungicides manufacturers recommend 1 day for fludioxonil and cyprodinil in blueberries (Syngenta, 2010). BASF (2013) does not make any recommendation about azoxystrobin, boscalid or pyraclostrobin in blueberries, but recommend 3 days for boscalid and pyraclostrobin in grapes. However, the commercializers recommend 6 days for boscalid and pyraclostrobin, and 90 days for azoxystrobin, and these are the periods used in the blueberry fields.

The concentration average for cyprodinil and fludioxonil in blueberry fruit are 1581 and 1077 mg/kg, respectively. However, the medians are quite small (196 and 253 mg/kg, respectively). The maximum concentrations found are 7066 and 4470 mg/kg for these two compounds, respectively. These high values could be related with the half life time that is 16.3 and 12.7 days for fludioxonil and 3.4 and 2.2 days for cyprodinil, in Jewel and Emerald blueberries, respectively; and the time recommended between application and harvest that is 1 day in both cases. The blueberry producers use in the field the doses of fungicides and the moment of application that are recommended by the fungicide manufacturers. There are not investigations and enough information about the period of time that should be let after each fungicide application and the harvest. It is different for each chemical compound and probably for each blueberry variety. The producers would not be leaving pass the necessary time before harvest for reducing the fungicide concentration to a half. On the other hand, the time normally used for azoxystrobin between application and harvest is 90 days which is very high in comparison with the half life time of this fungicide for both blueberry cultivars that are lower than 18 days (Munitz et al., 2014). For this reason azoxystrobin show the lower average concentration (48 mg/kg).

Referring to blueberry juice samples, azoxystrobin was not detected in all samples probably because of the long time between the application of this fungicide in the field and the harvest of the fruit, related with the half life time. Cyprodinil and fludioxonil are presented in high concentrations in all samples of blueberry juice. The average concentrations are 852 and 2842 mg/kg, respectively.

The average concentration of pyraclostrobin is 3414 mg/kg, higher than in fruit. This could be probably because fruits that is not good for consumption, because they have concentrations of fungicides higher than the LMRs for instance, are used in the juice elaboration process.

Besides the high occurrence frequency of fungicides found in blueberry fruit and juice samples, co-occurrence of some of them in the same sample was observed. Azoxystrobin, boscalid and pyraclostrobin concentration in blueberries did not exceed the LMR established in Europe. But seven samples of fruit presented concentrations of cyprodinil higher than the LMR, and nine of fludioxonil. The concentration of these in fruit and juice were high probably because of the short period of time between the application in the field and the commercialization or industrialization. The results show that a change in the time between application of the fungicide and the harvest of the fruit is needed. 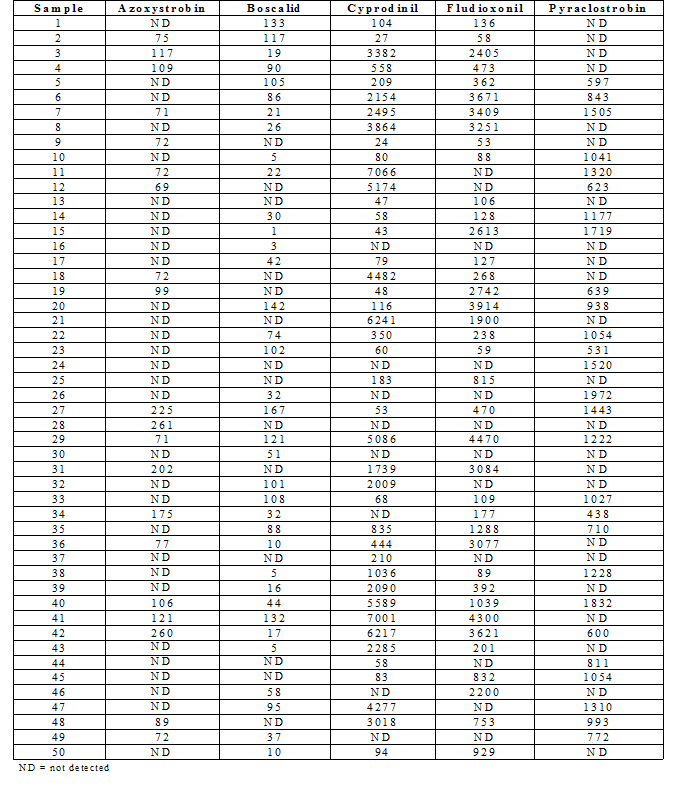