In this study, functional strains from the natural environment such as fermented pig manure were isolated and identified by preliminary screening and rescreening. Among them, strains such as Bacillus subtilis, Bacillus pumilus, Brevibacillus laterosporus, and Proteus mirabilis had a particularly strong ability to inhibit the release of ammonia gas. Through many repeated trials, we confirmed that this bacterial agent could adapt to environments containing water and grow normally. A deodorant was developed and tested on pig farm sewage. Further, the appropriate dosage of the composite microorganism bacterial agent and the change in various indices of the sewage with treatment time were verified.

With the development of large-scale agriculture, malodorous gases produced from livestock manure have not been effectively utilized, and environmental pollution has become an increasingly serious issue (Zhao, 2006). Microbial technology has advantages of low energy consumption, low cost, simple operation, long duration, and no secondary pollution, and it has become the most promising technology for treatment of wastewater from pig farms (Wan et al., 2012). By adding an exogenous bacterial population, using the biochemical reaction of microbial-secreting functional enzymes, macromolecular organic matter in the sewage can be degraded into small molecular substances, which absorb these substances and convert them into energy for their own biological activities, thereby effectively improving the degradation rate of organic pollutants in sewage (Luo et al., 2017).

The composition of sewage pollutants from pig farms is generally complex, and it is difficult to completely remove all pollutants using a single bacterial strain. Instead, it requires a variety of microorganisms that can together achieve complete degradation of different pollutants (He et al., 2007). Since multiple degrading enzymes are simultaneously required to remove refractory compounds in pollutants, and the activity of various enzymes secreted by a single strain is not high, it is possible to use multiple microorganisms that provide different enzymes to achieve complete degradation of pollutants (Tian et al., 2011; Bai et al., 2017). In short, by studying the appropriate ratio between different bacterial strains, a composite microorganism bacterial agent can be constructed and combined with microbial populations suitable for different polluted environments, which can degrade different sewage types and be tightly controlled. This is an active topic of research in the development of composite microorganism bacterial agents (Li et al., 2006; Zhao, 2018).

In this study, indigenous deodorant microorganisms were screened from decaying soil and optimized to construct a deodorant, which was tested on pig farm sewage. Its effects on COD, BOD5, TP, TN, and SS of agricultural sewage were studied to provide a basis for utilization of agricultural manure as a resource.

The pig farm sewage used for experiments was collected from the farms of Famous Animal Husbandry Co., Ltd., Gongzhuling, China.

Briefly, 10 g of sample was collected from the environment of decaying soil near composting pig manure, placed in 0.9% normal saline, and agitated for 30 min. After sedimentation, the supernatant was collected and plated on LB basal culture medium using the plate streaking method. Single bacterial colonies were cultured and screened at a constant temperature of 30°C, and functional bacterial strains were selected through repeated screening.

Single bacterial colonies were selected from slant culture test tubes, inoculated in LB liquid culture medium, activated overnight at 28°C and 150 rpm, and centrifuged (8000 rpm, 5 min) to collect cells. The supernatant was discarded, and the cells were washed twice with sterile PBS and resuspended into a bacterial suspension with an OD600 nm of approximately 1.2, which corresponded to a bacterial concentration of approximately 2.4 × 108 cfu/mL. Unless otherwise specified, the seeding suspensions of all strains in the following experiments were prepared according to this method.

For the five sets of treatment group experimental equipment, about 1750 L of pig farm sewage was added separately after solid-liquid separation, and the tests were performed in two batches. In the first batch of tests, different concentrations of bacterial agents (0, 10 mg/L, 20 mg/L, 30 mg/L, 40 mg/L) were added to remove organic pollutants. In the second batch of experiments, the effects of changing the number of days of fermentation after adding bacteria from 0 days (T1), 15 days (T2), 20 days (T3), 25 days (T4), and 30 days (T5) were analyzed. The demonstration was divided into ten additions of bacteria, the amount of bacteria per addition was 30 mg/L per 1 L of sewage diluted to 30 kg of groundwater, and bacteria were added once every 3 days. The demonstration was completed in 30 days.

The tests of COD, BOD5, TN, TP, SS, NH3, and other tests were provided by Changchun Yingbang Testing Co., Ltd.

Pure colonies were isolated and screened from the decay environment samples. Bacterial strains with good cell growth were selected based on their efficacy to remove ammonia. Re-selection was performed on the preliminarily screened strains based on ammonia as an index. The bacterial strains differed in ammonia released. Of which, the strains named Lin111, Yu21, Ke22, and J23 exhibited the most significant inhibition of ammonia release (Fig.1) and good cell growth potential (Fig. 2). The results in Fig. 1 show that the Lin111 strain had the smallest amount of ammonia released after 15 days of treatment, at 134 mg/L, and the ammonia released after 20 days of treatment was 141 mg/L, indicating that after 15 days, the release of ammonia gas had nearly reached a stable state after 15 days. The four strains in order of increasing amount of ammonia gas released were Lin111, Yu21, J23, and Ke22. 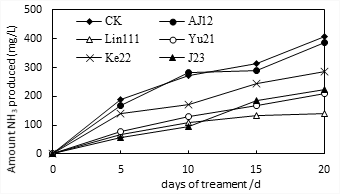 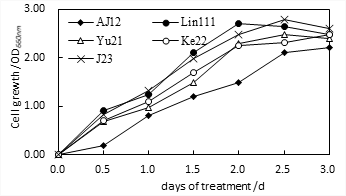 Fig. 2 Effect of the number of days of bacterial strain reaction on cell growth

Through the preliminary screening, a large number of bacterial strains that did not meet requirements were eliminated, and the remaining strains produced clear zones of inhibition on the culture medium. The four strains Lin111, Yu21, Ke22, and J23 were cultured at 30°C, and changes in the zone of inhibition were observed according to the properties of the different enzymes secreted by the strains on different culture media. The Lin111 strain could dissolve phosphate and polyphosphate on culture medium containing calcium phosphate (Fig.3-A). Fig. 3-B, 3-C, and 3-D show single colonies of the strains produced on LB medium. Based on these single colony characteristics exhibited on the medium, the strains were identified using 16S rRNA. 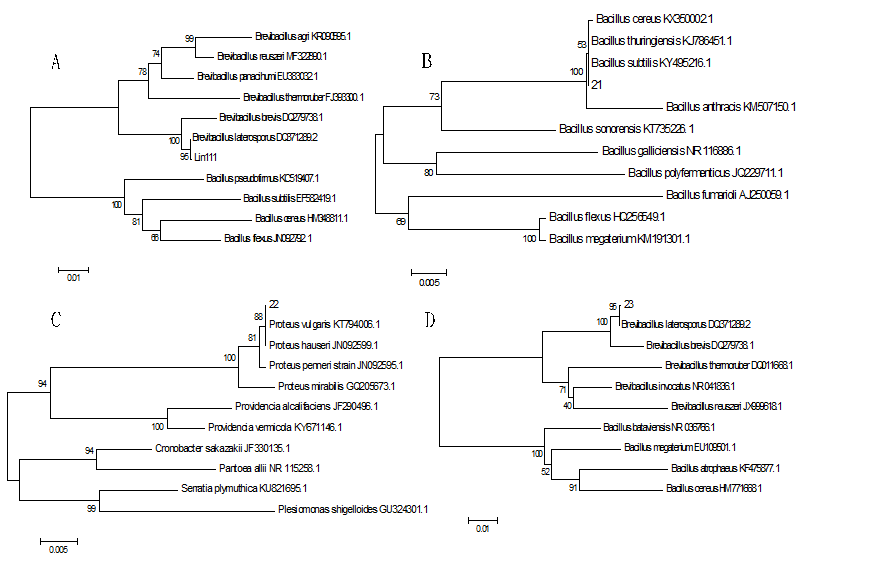 In Table 1, the effects of different concentrations of bacteria (0, 10 mg/L, 20 mg/L, 30 mg/L, 40 mg/L) on the removal of organic pollutants were analyzed. The results for the indices COD, BOD5, TN, TP, and SS indicated some removal efficacy. When the concentration was 40 mg/L, the five indices were significantly reduced, and the degradation of organic matter was the most optimal.

After 30 days of reaction with bacterial agents, the change in the color of sewage with addition of different concentrations of bacterial agents (10–40 mg/L) was observed (Fig.S1). The results showed that when the concentration reached 30 mg/L or 40 mg/L, the color of the mineral water sewage tended to be yellow. However, for large-scale demonstration of the microbial agents, it is necessary to consider their cost, and addition of the minimum amount of bacteria was the most economically feasible option to achieve the best effect. Taken together with the results in Table 1, a concentration of 30 mg/L was used for the added bacterial agent in the subsequent experiment.

The change in BOD with time showed that at 25 days after bacterial agent addition, BOD concentration decreased from 2003 mg/L to 929 mg/L for a removal rate of 54%. After 30 days, the removal rate reached 55%, indicating that the BOD degradation rate reached a stable value after 25 days (Fig. 5-B).

Based on the change in total phosphorus with time (Fig. 5-C), the addition of composite bacterial agent to the test water sample began to take effect starting at 15 days, at which total phosphorus decreased significantly from 103 mg/L to 76 mg/L, for a removal rate of 27%. After which, the rate of decline slowed with time until it stabilized.

The change in total nitrogen with time after addition of the composite microbial agent to the test water sample is shown in Fig. 5-D. The results showed the total nitrogen concentration decreased slowly with time after the composite bacterial agent was added and became stable after 20 days, decreasing from 469 mg/L to 358 mg/L, for a removal rate of 24%, and decreasing to 301 mg/L after 30 days, for a removal rate of 36%.

In this paper, a bacterial deodorant was constructed by separating and screening strains obtained from the natural environment, and functional bacterial strains associated with indigenous soil microorganisms were added to pig farm sewage to introduce beneficial microorganisms gradually as the dominant strains. The effects of removing organic pollutants and changes in various indices over time after addition of bacterial agents to sewage were analyzed. Experimental results showed that after 30 days of treatment with the bacterial agent, the COD, BOD, TP, TN, and SS removal rates were 51.3%, 55%, 27%, 36%, and 39%, respectively, indicating that the addition of composite bacterial agents to water had significant effects on degrading pollutants based on various water quality indices. However, sewage treatment cannot simply rely on any given treatment technology, and microbial treatment cannot achieve the goal of discharging sewage. Therefore, it must be combined with other treatment processes as needed to create an environment conducive to microbial growth, so that viable microorganisms can improve the organic matter removal rate. 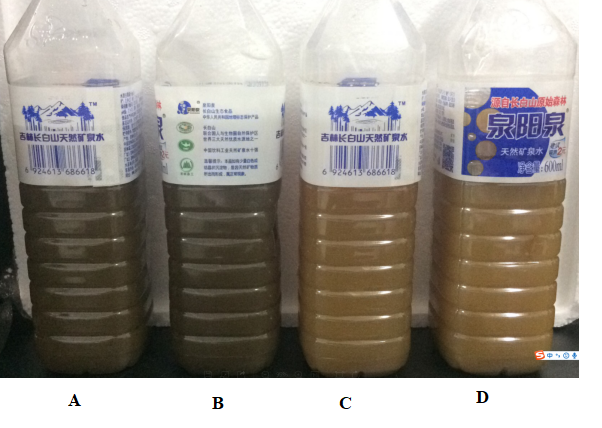 Figure S1. Sewage in mineral water bottles after bacterial agent demonstration. The changes in color were observed, depending on different concentrations of the added bacterial agent (A: 15 days; B: 20 days; C: 25 days; D: 30 days).