In this study, three (3) scenarios were modeled in EFTRAN 4.4.1 and analyzed in SigmaPlot for Version 10.0 to determine quantitatively the impact of the counting geometry (source and detector parameters) on the coincidence summing correction factors used in the analysis of primordial radionuclides in uncontaminated soil samples. The study will also assist gamma spectroscopist to determine when coincidence summing correction may be excluded in the gamma spectroscopy of uncontaminated soils. The materials simulated in this study were typically constituted soil in a polystyrene container (height 21mm and radius 69.5 mm) in contact geometry with a HPGe detector. Additionally, the study examines how these corrective factors, impacted the calculated sample activity measured in Bq/kg. The results of the modeled scenario indicated that the only values of interest were 15.3% for Pb-212 (238.63 keV), 4.11% for Ra-224 (241 keV), and 12.64% Pb-214 (295.17 keV). When the values were summarized by series, the impact on the uranium (1.1%), thorium (6.9%) and actinium series (0%) suggested that the impact was only significant for the thorium series (> 4%). The results of the impact of the counting geometry suggested that the impact on the coincidence summing correction factors were as follows; crystal diameter, maximum of 25% occurring at 969.11 keV (AC-228), and a maximum of 0.5% at 143.76 keV (U-235) for crystal height. The standard deviation of the distribution of changes in the correction factors were 6.8 for crystal diameter and 1.4 for crystal length 50% variation modeling.

In this research, the primary concern is low level primordial radiation (low counting rate, i.e < 100 counts/sec) from uncontaminated areas measured in contact with the detector, hence only cascade summing is of real significance since random summing impacts the analysis of high activity sources. The phenomenon of coincidence summing has been of interest to many spectrometrists [1-6]. It becomes particularly interesting since many papers have been published examining the radiation profile of the terrestrial environment [7-12]. The uncertainties associated with  nuclear decay data have been studied to determine how these uncertainties affect the detection efficiencies in gamma-ray spectrometry performed with HPGe detectors in close geometry with cascading gamma-rays [3].Coincidence summing corrections is generally incorporated in gamma spectroscopy[13-16]. Efficiency calibration and coincidence summing correction were performed for an array of NaI(Tl) detectors developed for in vivo neutron activation analysis [4]. Other analyses included  a HPGe detector photopeak efficiency calculation including self-absorption and coincidence corrections for Marinelli beaker sources using compact analytical expressions [15]. Due to the impact of low-level environmental radioactivity, coincidence summing corrections have been used in these study to enhance reported activity concentration results[1, 17]. A number of software is available to assist in mitigating the problems associated with cascading gamma rays [5, 18]. Monte Carlo simulation of several gamma-emitting source and detector arrangements for determining corrections of self-attenuation and coincidence summation in gamma-spectrometry have been performed [16].The key scientific issue to be addressed in this study, is to determine whether the acquisition and application of coincidence summing software is a strict requirement for all scenarios in the analysis of gamma activity concentration in low-level environmental samples usually measured in close proximity to detectors. 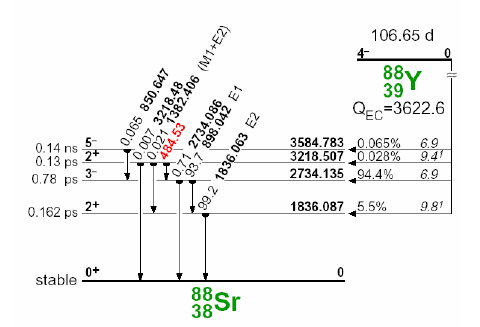 Figure 1 : Decay scheme of Y-88 by electron capture disintegration and excited states of Sr-88 with gamma rays. The relative relative intensities of the gamma rays are located immediately above the transition arrow followed by the gamma-ray energies (keV), in bold type. M1, E1, and E2 multipolarities refers to the magnetic diploe, electric diplole and electric quadopole associated with the decays

Summing effects from cascade (Figure 1) and random/chance summing affects the area under the photopeak for radionuclides of interest. Cascade correction occurs when radionuclides emit multiple cascade gammas in its decay, and these gammas are detected within the resolving time the detector’s counting system. The impact of the cascading effect is not only limited to gammas from the same source but may include X-rays and the 511 keV annihilation photon. Assuming no isomeric states are involved, the lifetime of an intermediate state being so small (0.78 ps), the gammas appear to be emitted in coincidence. If the resolution time of the spectrometry system,  is longer than the time delay between the emitted gammas, sum coincidence peaks above and below the expected gammas will occur in the spectrum. In the diagram above, gamma at 1382.406 keV (gamma #1) and 1836.63 keV (gamma #2) will suffer from cascade summing losses while gamma at 3218.48 keV suffers from cascade summing gain. Except for the high energy range where the background is low, these summing peaks are usually lost in the background and continua of the spectra. In gamma spectrometry,  is usually determined by the shaping time constant of the liner amplifier.

Assuming two gammas (1 and 2) in coincidence, it can be shown that;

where ε1 and ε2  are the intrinsic peak efficiency of the detector for gammas 1 and 2, Ω  is the fractional solid angle subtended by the gamma on the face of the detector, S is the number of source decay over the period of observation, y1 and y2 and  are the branching ratios of gammas 1 and 2 respectively, and  is a factor that accounts for any angular correlation between the two gamma rays. True coincidence summing correction factor for voluminous sources, as used in this study are computed through Monte Carlo approach summarized as shown below:

where L1γ-γ and S1γ-γ are losses and gains probability respectively due to cascade summing between decay gamma rays and gamma rays, L1γ-X,511  and  is the loss probability between decay gamma rays and X-rays or decay gamma rays and 511keV annihilation photon [19]. The determination of the cascade correcting values, generally acknowledged to be a complex process, is now generated using Monte Carlo modelling application. These values are dependent on the detector efficiency values for the various gammas in cascade, the fractional solid angle subtended by these gamma, their activity, branching ratio, and their angular correlation [20]

Nuclides affected by cascade summing require cascade summing multiplying factor to account for photopeak counts lost or accumulated due to cascade summing. Except for K-40 (at 1460 keV), Cs-137 (at 661.66 keV), Th-234, and Pb-210, all other primordial within the energy range of interest (up to 2MeV), required cascade correction. Figures 2 and 3 shows the decay of K-40 and Cs-137, both of which require no coincidence summing corrections in the gamma spectroscopy of low level environmental samples. In the electron capture decay of K-40 to stable Ar-40, the characteristic gamma energy of 1460.859 keV is not emitted in cascade with any other gamma, nor are any other gammas combined at this energy level. Similarly, in the beta decay of Cs-137 to Ba-137 (Figure 3), the characteristic gamma at 660.661 keV is also similarly unaffected. 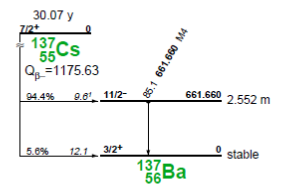 The determination of the cascade correcting values, generally acknowledged to be a complex process, is now generated using Monte Carlo modelling application. These values are dependent on the detector efficiency values for the various gammas in cascade, the fractional solid angle subtended by these gamma, their activity, branching ratio, and their angular correlation [20]. Monte Carlo methods are used in numerous applications in gamma spectroscopy [17, 21-25].

Monte Carlo methods/experiments refers to  a broad class of computational algorithms that rely on repeated random sampling to obtain numerical results. The essence is in the application of  randomness to solve problems that might be deterministic in principle. They are often used in physical and mathematical problems and are most useful when it is difficult or impossible to use other approaches. Monte Carlo methods are mainly used in optimization, numerical integration, and generating draws from a probability distribution [26]

Three (3) scenarios were modeled to determine quantitatively the impact of the counting geometry (source and detector parameters) on the coincidence summing correction factors used in the analysis of primordial radionuclides in uncontaminated soil samples. Additionally, the study examines how omission of the corrective factors, impact the calculated sample activity measured in Bq/kg. Due to complexities related to the counting geometry employed, errors below 4% is not significant [27]. Additional coincidence summing correction values were generated based on the following two (2) scenarios:

In Scenario #3, the impact of non-inclusion of correction factor on the main primordial radionuclides in environmental samples were examined.

The method of sample preparation (by the same author) has been described in a previous publication[28]. From the analysis of these 68 samples, a representative sample (from an area called Black River in Jamaica) was selected. This sample was analyzed in SPECTRW[29] and displayed as shown in Figure 4. 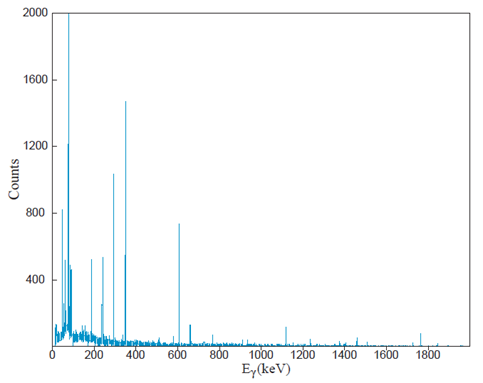 The International Atomic Energy Agency (IAEA) funded Efficiency Transfer and Coincidence Summing Corrections for Gamma-ray Spectrometry (EFTRAN 4.4.1) software code was used to generate the cascade correcting values. EFFTRAN is a free tool for efficiency and true coincidence summing corrections in environmental gamma-ray spectrometry, and was developed with partial financial support of the IAEA Coordinated Research Project no. 1471 [5, 30]. EFTRAN was selected dues to its availability and the rigorous testing its use in the gamma spectroscopy [5, 30] .The detector and source setup (in EEFTRAN) is shown in figures 3 and 4 respectively. The study simulates a polystyrene cylindrical container (Table 1) filled with uncontaminated hydrated surface soil sample (Table 2), and in contact geometry with a typical HPGe detector (Table 3).

Table 2 : Elemental concentration of simulated soil used in this study.

The values of the five (5) generated coincidence summing correction factor in Table 4 are based on the typical experimental setup for measuring primordial radiation in uncontaminated surface soil. The default correction value refers to experimental setup shown in Tables 1-3, while the values generated by Scenarios # 1 and 2 (previously described) are shown. Table 5 refers to Scenario # 3 and is the impact (on the measured activity of the sample) of not applying the default coincidence summing correction factor.

The percentage variation between the default values and the scenarios (done in Excel) were input into Sigma Plot, from which the graphs (in the Results and Discussion section) were generated.

Scenario #1 models the impact of 50% reduction in crystal diameter and length on the coincidence correction factor. 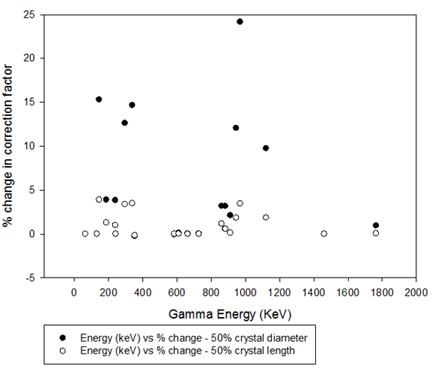 Scenario #2 models the impact of a 50% reduction in source container diameter and height on the coincidence correction factor. 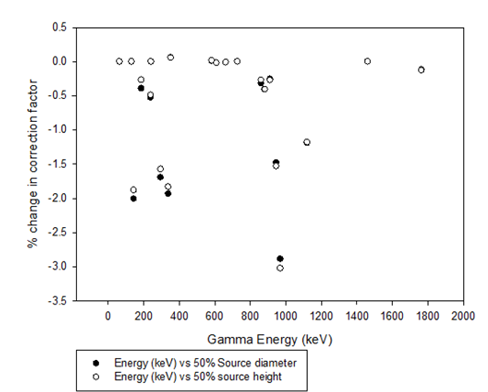 Figure 6 shows that the error in the source container’s diameter and height, did not have a significant impact on the true value of the coincidence summing factor. In this case a maximum variation of approximately 3% occurred across the gamma energy range of interest 60 – 2000 keV. This maximum value occurred at 968.97 keV and corresponds to the actinium isotope AC-228. The standard deviation of the distribution (for both source diameter and height) was 0.8. The values here suggest that the impact of the source geometry variation (up to 50%), was not significant (< 4%). The rationale for this result is probably because the gamma rays leaving the source and arriving at the face of the detector were not significantly impacted by the geometry changes.

Figure 7 is a composite of Scenarios #1 and #2. Table 3 summarizes the variation. 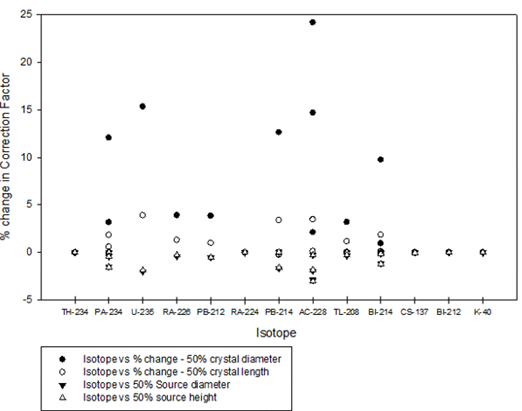 Table 7: Percentage change in soil sample activity (Bq/kg) due to the absence of coincidence summing. 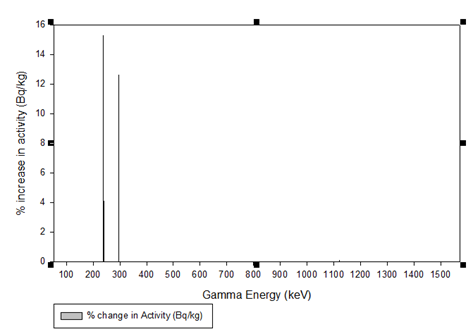 Figure 8 :Percentage change in activity (Bq/kg) in primordial radionuclides in uncontaminated soil samples due to the absence of coincidence summing factor.

The SPECTRW analytical software used in this study, summarizes the primordial energy range (0 to 2000 keV) as Cs-137, K-40, along with the uranium, thorium and actinium series. The impact of not applying the correction factor is shown in Table 4 and Figure 9.

Table 8: Impact on percentage change in summary activity of primordial radionuclides in soil samples due to coincidence summing error. In this case no summing was compared to summing application. 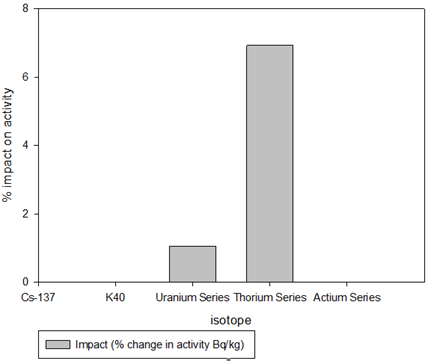 The study concludes that in general, the non-inclusion of coincidence summing correction factors will not significantly impact the results of gamma spectrometry of individual isotopes in uncontaminated surface soils if the energy range 200 – 300 keV is omitted. The isotopes that are significantly affected are Pb-212 at 238.63 keV, Ra-224 at 241 keV, and Pb-214 at 295.17 keV. When the isotopes are organized by series, the absence of cascade summing factors will only impact the thorium series; no impact will occur on the uranium and actinium series. While source container geometry will not have a significant impact on the generated coincidence summing correction factors, the crystal geometry (especially crystal diameter) will have a significant impact.