The effects of anthropogenic activities on fisheries and fisheries products in Niger Delta water were investigated. Two major Rivers in the region were investigated and three stations were chosen per river depicting downstream and upstream stations and were sampled on monthly basis. The down streams stations are the polluted and heavily dredged sites, where the upstream station has no evidence of pollution.  During these periods, the fishes of the same species were collected and analyzed for morphological and physiological changes, after which they were returned back to the rivers. Morphological changes such as skin ulcerations and other lesions, as well as fungi infections were observed in the down streams fishes. The fish in up streams look healthier than the downstream fishes. The physico-chemical parameters between the up streams and down streams stations vary significantly (p < 0.01). The release of pollutants into the water in the Niger Delta areas may triggers off naturally occurring bio toxicity cycles and other fish poisoning.

Growing human population densities in coastal communities have manifested a demonstrably adverse effect on aquatic resources. The scientific literature is replete with evidence of inorganic and organic pollutant accumulation in coastal waters from anthropogenic effluents [1,2,3,4,5]. These anthropogenic may alter natural processes and natural resource communities; unabated degradation of the aquatic environment caused by a wide spectrum of human activities poses consequences for fishery resources and their habitats.

Sewage such as house hold sewage, human sewage and industrial sewage that is untreated causes water pollution in the same way as fertilizers do. Human sewage contains germs that cause diseases such as hepatitis and cholera.  Soaps and washing detergents contain both natural and manmade chemicals. The natural chemicals can cause a pollution problem similar to that caused by fertilizers.

Like sewage outfalls, dredging activities are point sources for a variety of aquatic contaminants, particularly metals and other trace elements. These substances tend to adhere to solid particles within the water, become adsorbed onto finer sediment fractions once dispersed into coastal waters, and subsequently accumulate in depositional areas. Together with microbial action, local salinity and other properties of the riverine, estuarine, or marine receiving waters may alter the chemistry of these contaminant-particle complexes in ways that render them more toxic than their parent compounds. Upon entering the food web, such contaminants tend to accumulate in benthic organisms at higher concentrations than in surrounding waters [7] and may result in various physiological, biochemical, or behavioral effects [6,8]. Suction dredging most certainly can impact the reproductive success of fish. Fish, including salmon, steelhead, sculpin, minnows, suckers, lamprey and trout utilize small gravel substrates for spawning. Dredging can reduce substrate embeddedness (the degree to which gravel, cobble, boulders and snags are covered or sunken into the silt, sand or mud of the stream bottom) and therefore impact spawning habitat.

The Ethiope River takes its origin from around Umuaja and flows through zones of freshwater swamps, mangrove swamps, and coastal sand ridges. It is a relatively large water body which stretches within latitudes 6°30’-6°00’ N and longitude 8°24’-5°21’E, covering a surface area of 204 sq km, with a length of about 142km .It is one of the major River in the Niger Delta, Nigeria. It drains various tributaries and empties its content to Benin River that in turn empties into the Atlantic Ocean (Figure 1).

Warri River is a major navigable channel of the Niger Delta, southern Nigeria (Figure 2). It takes its origin from around Utagba Uno and flows through zones of freshwater swamps, mangrove swamps, and coastal sand ridges. The river is a relatively large water body which stretches within latitudes 5o 211 - 6o 001N and longitude 5 o 241 – 6o 211 E, covering a surface area of about 255 sq. km with a length of about 150km [9] .It drains various tributaries and empties into the brackish Forcados River that in turn empties into the Atlantic Ocean

The two Rivers are stress by anthropogenic activities and their qualities are influenced majorly by urban centers, commercial activities such as transportation and dredging. Biodiversity of these Rivers is remarkably high, with a large diversity of fish, mollusks, shellfishes, insects, amphibians, reptiles and birds.

Stations were established at Ovwian, Ekakpamre and Ovu. Ovwian  and Ekapamre stations were the downstream stations while Ovu served as control.

Other such as turbidity, total dissolve solid,  biochemical oxygen demand, nitrate, and phosphate  of each of the sampling stations were measured using appropriate technique.

The findings showed that sewage disposal dredging activities had a significant effect on the water quality in the studied rivers. In addition to the direct impacts, there are deleterious impacts that cause temporary or permanent flow diversions and impoundments and the transport of aquatic invasive species from one point to another [11, 12]. There were normalization in physicochemical parameters in away from the sewer points and dredging sites. Similar observation was reported by [13] in seawater close to the sewage outfall with rapid normalization in levels with increasing distance from the outfall in Antarctica Kerguelen Island.

Water quality parameters: The range of the concentrations of the limnological parameters at three stations each along the Ethiope Rivers  and Warri River , sampled monthly from January to August 2014 is shown in Table 1 and 2. The samples varied significantly between various stations and between seasons (p < 0.05).

The temperature ranges observed in the polluted and dredged stations was higher than the temperature trend in water bodies in the tropical forest areas [14] .The recommended limit of dissolved oxygen (DO) for fish is 5mg/l [15], but conversely,[16]  recommended a range of 2mg/l - 7mg/l, which fall within the range observed in all the stations including the reference stations.  The pH obtained from this study was higher than the acceptable pH range for drinking water which is between 7.0 - 8.3 [17], 6.5 - 8.5 [14]  .6.0 - 7.0 [17]. [18] stipulated a DO range of 5.5 - 10 for tropical fishes. Total alkalinity showed a positive index of potential productivity for the waters at 31.93 - 35.90 for fresh water species [14] .

Total coliforms have been used as indicators for many years in evaluating water quality for several water uses with respect to domestic waste [19]. The microbiological criterion for shellfish for human consumption has been accepted internationally to be 70 total coliforms per 100 ml using MPN, with no more than 10% of the values exceeding 230 MPN/100 ml. The UNEP/WHO standards for shellfish harvesting waters are at the maximum of 10 feacal coliforms /100 ml for 80% of samples taken and no feacal coliforms detected for drinking water [20]. Other parameters and the recommendation range by the appropriate authorities are summarized in the tables 1 and 2.

Biodiversity was seriously altered in the downstream stations, less fishes and other invertebrates were caught. The investigated fishes C. furcatus, Clarias gariepinus, T. zilli, and Clarotes laticeps were very scanty in downstream stations. Though, there were other species in reference stations, not present in down streams. These were chosen because they were found in all the stations. The few fishes caught in the downstream had as skin ulcerations and different lesions, as well as fungi infections. The magnitudes of alterations depend on the close proximity to pollution sites. Ovwian and Amukpe stations were the worst affected, which could be attributed to combining effects of dredging, sewage and anchor location for canoes and boats. Beside these stations were within the cities metropolis, where other human effects which could not be accounted, can detriment the life aquatic inhabitants.

The earthworms found in these stations also showed disparity. The downstream stations were darker, slimmer and found on soil surface instead in the soil as observed in the upstream stations. This could be as a result of the penetration of toxic that emanated from the toxic from the sewages and the dredgers (diesel, lubricant and metals), leading to the poor soil aeration and discomfort of the annelids. The upstream annelids were similar, healthy and no conspicuous colour alteration. Crabs and the periwinkles showed multiple colours in the down streams stations and were not as large as the up streams.

Sewage discharge had significant effect on the water quality in terms of feacal coliform indicator bacteria levels. This effect was well spread throughout the study area. People who bathe or surf in the water can fall ill if they swallow polluted water. Similarly, sewage can poison aquatic organisms that grow near the shore. People who eat poisoned fish, snail and crabs have risk suffering from an acute and sometimes fatal illness. Similarly, dredging without necessary precaution is devastating. Destruction of the shoreline and alter biodiversity. Many people that involve in this act only do so to enrich themselves without considering the environmental impacts.

In order to have a balance environment, all hands must be on deck, though not handy, hence to contain these anomalies, there should be stringent environmental laws that will make it tougher for people to pollute. Similarly, there should be introduction of polluter pays principle. This means that whoever causes pollution should have to pay to clean it up, one way or another. Life is ultimately about choices and so is pollution. We can work together to keep the environment clean so the plants, animals, and people who depend on it remain healthy. We can take individual action to help reduce water pollution, for example, by disposing sewage appropriately, using environmentally friendly detergents not pouring oil down drains, reducing pesticides etc. We can take community action too, by picking litter to keep our rivers and seas  little bit cleaner. And we can take action as countries and continents to pass laws that will make pollution harder and the world less polluted. Working together, we can make pollution less of a problem and the world a better place.

Because virtually nothing is known about the biological effects of pollutants in the Niger Delta ecological zone, and because of the elevated current public attention for the water quality effects in the river, it is urgent that more scientific data are collected on the health of the aquatic ecosystem in the rivers in this region. We propose to initiate a study in which aquatic animals will be collected from these rivers and then analyze for health status and pollution effects. Because effects in animals that are in the top tiers of the food web are often good indicators for ecosystem health. Thus, the overall goal for this project is to investigate exposure and effects of anthropogenic pollutants on fish in the Niger Delta Rivers. We will achieve this goal by collecting different fish’s species from a variety of sites along the rivers, and by measuring a suite of health parameters, among which: that include somatic indices, tissue histology, blood and bile analysis and expression of detoxifying enzymes and proteins in liver. An important part of the project is to get students from high school to graduate school levels involved in the project and also to actively relay the obtained information to local conservation interest groups. 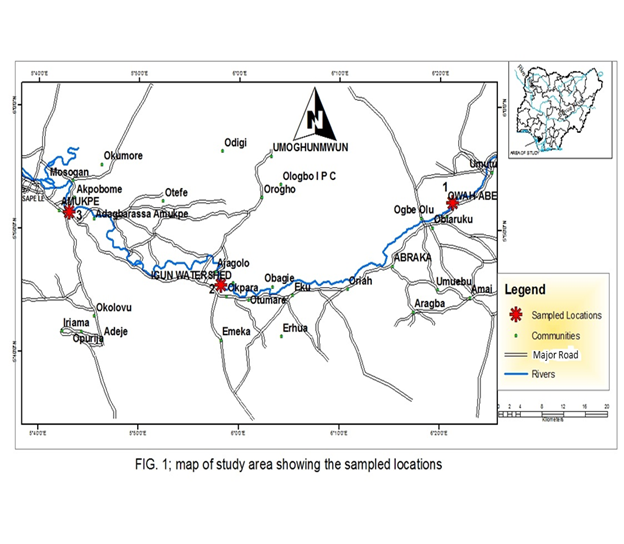 Towards diversification of aquaculture in Ghana: Reproductive response of Sarotherodon melanotheron to locally formulated fish feed

The effects of different carbon sources on growth, tyrosine kinase activity and gene expression of insulin receptor 1 in GIFT tilapia

Consumers Demands on Organic Aquaculture Product in Bangladesh: A review from an Emerging Market perspective

Review of the Distribution and yield performance of Oreochromis niloticus (Linnaeus 1758) in different microhabitat types around Port Bunyala Bay of Lake Victoria, Kenya

Fish are not alone: characterization of the gut and skin microbiomes of Largemouth Bass (Micropterus salmoides), Bluegill (Lepomis macrochirus), and Spo

Livelihood status of egg collector and traditional knowledge of Carps Egg collection in the Halda River: A natural fish spawning heritage in Bangladesh

Effect of inorganic arsenic (As III) on growth and feeding of the Indian River prawn M. malcolmsonii