Objective:  To investigate the effect of Caveolin-1on the proliferation and migration ability in gastric carcinoma cells MGC-803and its mechanism.

Conclusion: Caveolin-1can inhibite the proliferation and migration ability of gastric carcinoma cells and its mechanism may related to BMI-1.

Gastric cancer (GC) is a fast‑growing malignant tumor in the digestive system, which is the third most common cause of cancer-related deaths. Despite the improvements in treatment and early detection reduced the incidence of GC,>1million new cases were estimated worldwide in 2018, while China is one of the countries with the highest incidence of GC (1-2). The prognosis of the GC is poor, as a result of the middle or late clinical stage of diagnosis, presenting a serious threat to Chinese and even global health.GC is a multifactorial tumor, including sporadic and familial cases. The common risk factors consist in environmental factor (Helicobacter pylori infection, EBV infection, tobacco smoking, and dietary factors) and genetic factor. Among environmental factor, Helicobacter pylori infection is regarded as the most important cause for the GC. In recent years, molecular mechanisms have been noted associated with the GC. Many genetic alteration were detected, deepened human beings understanding of the occurrence and development of GC. According to the WHO Classification of the Tumors series’ fifth edition, several subtype in GC are defined not only by microscopic characteristics but also by molecular phenotype, reflecting the important advancement in our understanding of GC(3). As structural-functional protein, Caveolin-1 plays a part in membrane transport, signal transduction and lipid homeostasis. Many kinds of malignant tumor were found to be related to the expression levels of Caveolin-1. But the exact mechanism is not fully understood. Further studies are needed to understand the role and mechanism of Caveolin-1 in malignant tumor.

As described previously, Human GC cell lines MGC-803 were prepared. The cell line was maintained in DMEM medium, and seeded in 35-mm culture plates. The cell line were divided into control group (without

treatment),and MGC-803/Cav-1 groups (transfected with pcDNA3.1-Cav-1). The cells were in logarithmic growth phase the next day, and were transfected in experiments, and washed once with cold PBS. pcDNA3.1-Cav-1 plasmid was extracted by QIAGEN plasmid extraction kit. The prepared cells of MGC-803/Cav-1 groups were transfected according to the specific steps refered in kit instructions. After 6 h, the culture medium was changed to DMEM containing 10 % FBS(without penicillin and streptomycin).After 48 h, 1500 lg/mL of G418 (Amersco, Inc., Solon,OH, USA) was added, and resistance screening was performed. The culture medium was changed once every 2 days. CAV-1 over expression was verified using western blot analysis.

The cell line was maintained in DMEM medium, and seeded in 35-mm culture plates. After 48 h, the DMEM were removed, the cells were washed once with cold PBS and cultured in DMEM without FBS for 4h. RIPA lysis buffer were used to lysis cells and total protein of the cells was extracted. BCA assay were used to detect the concentrations of total protein. Protein samples were separated by 10% SDS-PAGE and transferred to PVDF membranes. The membranes were blocked with 5% nonfat dry milk for 2h at room temperature, incubated with primary antibodies, rabbit anti- Caveolin-1(1:2000) and GAPDH (1:1,000), overnight at 4 C. The membranes were then incubated horseradish peroxidase-conjugated secondary antibodies(1：4000) for 1.5h at room temperature. The membranes were washed with TBST three times and then ECL (Beyotime, Haimen, Jiangsu, China) color and exposed in dark room. After scanned, the stripes width and grey value were analyzed by Image J image analysis system(national Institutes of Health, Bethesda, MD, USA).Each experiment was repeated three times.

MGC-803/Cav-1 and control group cells were seeded at a concentration of 5000 per well into a 96-well plate and routinely incubated for 36h at 37˚C. The white well was used for zero adjustment. 10 µl CCK-8 reagent was added into every well at 0, 24, 48, 72hours, the plates were maintained at 37°C 2 h later, then the absorbance of cells was measured at 450 nm using a microplate reader. Each group of cells was set with 5 auxiliary holes, and repeated for three times. Cell proliferation rate were estimated according to the following formula:

MGC-803/Cav-1 and control group cells were seeded at a density of 10000 per well into a 24-well plate and routinely incubated for 36h at 37˚C. 10‑µl pipette tip was used to scratch the cell monolayer once cells had reached 90% confluence.The floating cells were washed by PBS for two times. Subsequently, the cells were cultured in DMEM without FBS Finally, the cells were imaged using an inverted microscope (Olympus, Japan) at 0, 24 and 48h after wounding. The width of scratch distance between the two phases was measured to estimate the migration of cells and can reflect the difference in the cell migration ability in different groups. The recovered wound area (%) at the indicated time point

(24/48 h) was calculated according to the following formula:

SPSS19.0 statistical software was used for data analysis. Data are presented as the mean ± SEM. Data were compared between two groups by Student's t test. And a value of P <0.05 was considered statistically significant.

3.1. The expression of Caveolin-1 was higher in MGC-803/Cav-1 than that in control group detected via Western Blot.

Expression of Caveolin-1 was detected in Human GC cell lines MGC-803, MGC-803/Cav-1 group and control group. Western blot results showed that the expression of Caveolin-1 was high in the MGC-803/Cav-1 group (7.31±0.38) than that in control group (1.99±0.06)(Figure 1), which is a significant difference and suggests that successful transfection(P＜0.01).

Figure 1. The differential expression of Caveolin-1 in MGC-803/Cav-1 group and control group after stably transfected with pcDNA3.1-Cav-1 plasmid detected by Western-blot.

To evaluate the effects of Caveolin-1 over-expression on the abilities of proliferation in MGC-803 cell lines, cell proliferation rate were estimated by CCK‑8 assay. As shown in Figure 2, Caveolin-1 inhibited the cell viability compared with the control group at 24, 48, 72h, particularly obvious at 72h. There were no significant differences at any time point.

We deduced the Caveolin-1 gene may inhibite cell proliferation. 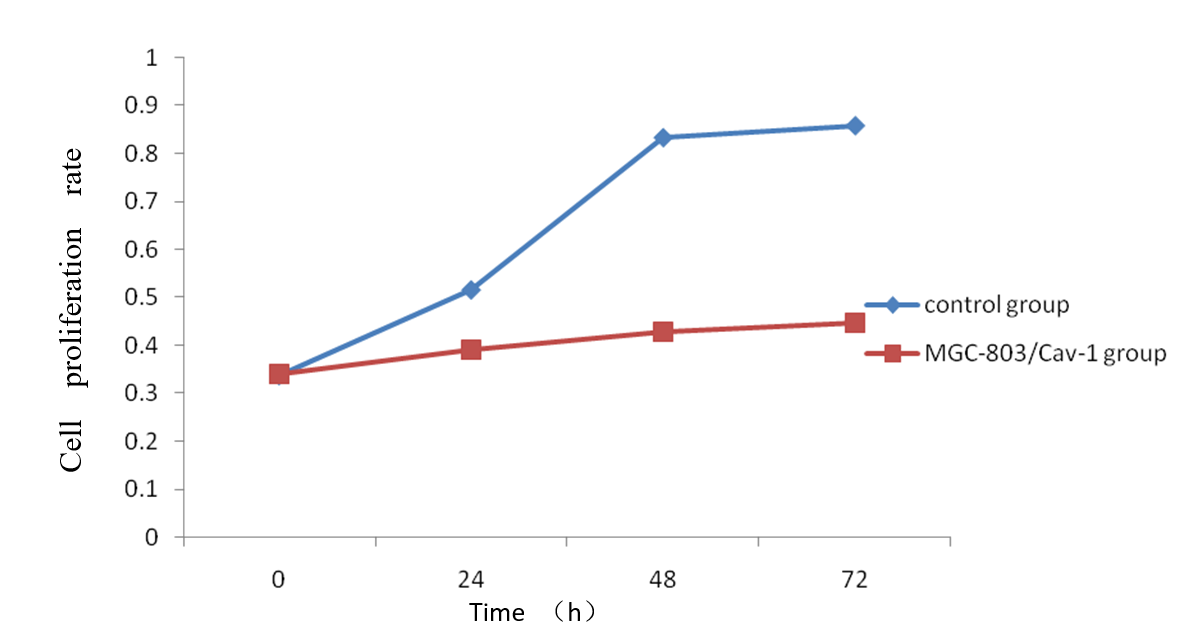 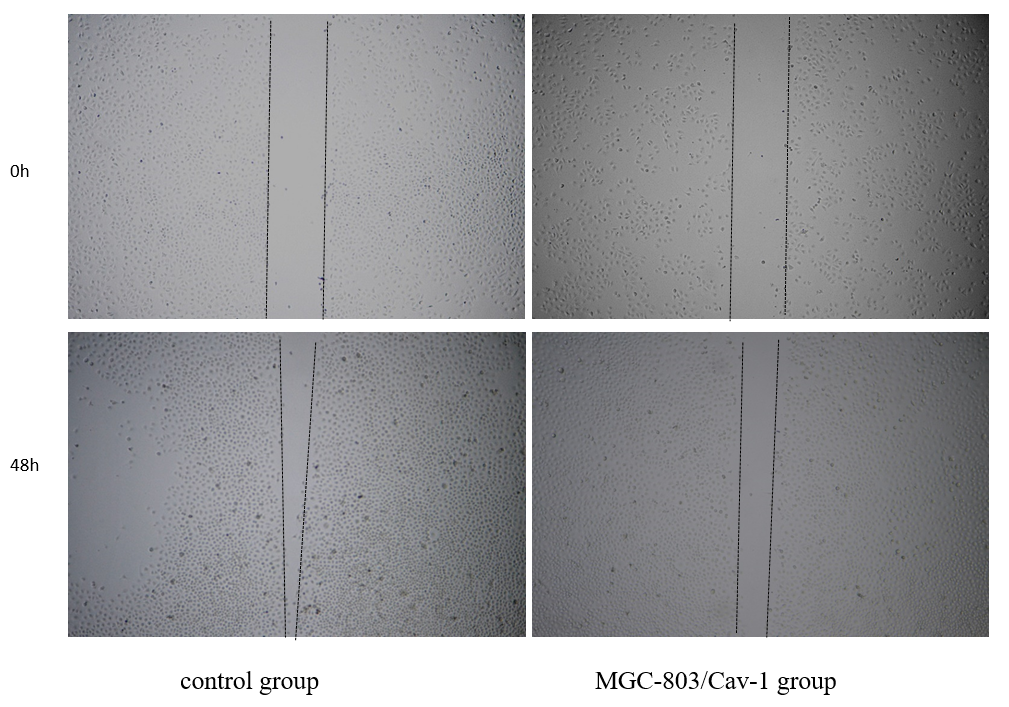 Western blot is used to detect the expression of BMI-1 in MGC-803/Cav-1 group and control group. The expression of BMI-1 was found significantly decreased in MGC-803/Cav-1 group (2.95±0.16) compared with control group (7.35±0.15).(Figure 4) This shows that Caveolin-1 may decrease the expression level of BMI-1. Caveolin-1 can regulate proliferation and invasion and a series of biological behaviors of Human GC cell lines by affecting BMI-1.

Gastric cancer (GC) is an often seen malignant tumor with a high incidence and mortality in China. Worldwide, GC is the third most common cause of cancer –related mortality, >1million new cases were estimated worldwide in 2018.[2] Because of the poor prognosis, GC presents a serious threat to global health. The main histological subtypes of GC include tubular, papillary, poorly cohesive, mucinous, and mixed adenocarcinomas. Due to the individual difference in epidemiological

characteristics, clinicopathological features and tumor biological characteristics, the treatment patterns and drug selection vary from person to person. Till now, HP infection is thought to be responsible for the most GCs, in particular non –cardia GCs [3-4]. In addition to this, genetic susceptibility and autoimmune gastritis were also involved. The molecular alterations of GCs refer to many gene, Caveolin-1 proteins and Caveolin-1 genes were one of the hot fields in GC. The function and mechanism of Caveolin-1are still indefinite, so deep study is needed.

As a component of membrane caveolae, identified in 1950s[5-6], Caveolin-1 is ubiquitous in many cells and tissues, contributing to numerous celland tissue functions, such as endocytosis, signal transduction, cell adhesion, lipid homeostasis, membrane transport, and so on. Gradually, Caveolin-1 was found enriched in multiple signaling molecules, tyrosine kinases and receptor, and its role in oncogenesis and progression have been the point of contention among biologists. The role of Caveolin-1 is controversial in different kinds of tumors, being a tumor suppressor gene in some tumors, for example, reduced expression was detected in lung, colon, ovarian[7-9], and several sarcoma(glioblastoma, osteosarcoma,and so on) [10]. On the opposite, in ameloblastoma and ameloblastic carcinoma, caveolin-1played a possible role in protumoral events, but may not necessarily participate in the malignant transformation process[11]. The study in prostate cancer showed that, Caveolin-1 is closely related to the pathological grade and clinical stage, significantly higher in prostate cancer samples than in benign prostatic hyperplasia samples[12]. In view of such evidence, it is not surprised that Caveolin-1 played a dual role in tumor, depending on cancer type and stage. In the early stages of tumor, Caveolin-1 is deduced to function as a tumor suppressor, while oncogene in advanced neoplasm, promoting to tumor progression and metastasis[13]. In our study before, down-regulation of Caveolin-1 was found in gastric cancer tissue. And the present study showed Caveolin-1 can inhibite the proliferation and migration ability of gastric carcinoma cells, but the specific mechanism is still unclear.

The mechanism of Caveolin-1 acting as a tumor suppressor is controversial. Caveolin-1 may inhibit the activity of the cyclinD1 gene promoter, and then inhibit MAPK pathway and the phosphorylation of the Src tyrosine kinase[12]. Caveolin-1 may promote the activation of gastric cancer-related fibroblasts, resulting in gastric cancer[14]. In leukemia HL-60 cells, caveolin-1 may inhibit the proliferation and induce apoptosis via PI3K/AKT signaling pathway.  The metastasis process of tumor is complicated, including the participating of different set of genes or cooperation of multiple molecular pathways. The BMI1 gene is a members of the PcG family, acting on the development of bone, hematopoietic and nerve[15]. Over-expression of BMI1 was found in tumor tissue and is related to tumor invasion, and prognosis. As shown in our study, there is a strong interaction between Caveolin-1 and BMI1, demonstrating that Caveolin-1 inhibited the proliferation and invasion in GC cells line through the BMI1 gene. BMI1 may promote transformation and formation of tumor via apoptosis, DNA damage repair, cell cycle and EMT[16].

In conclusion, our findings demonstrated that Caveolin-1 inhibited the proliferation and invasion in GC cells line through the BMI1 gene. We hope that our findings could provide a new insight toward the treatment of gastric cancer. Although the relationship between Caveolin-1 and BMI-1and the role of Caveolin-1 are needed to be further research in gastric cancer.

Perioperative Compartment Syndrome After Free Flap Reconstruction: A Case Report and Review of the Literature

Transportation degrades the quality of plaster cast models in virtual surgical planning -Is it time for direct intraoral scanning?

Use of Glide-scope in Trial Extubation of the Difficult Airway: Letter to the Editor

Successful perineum and scrotal reconstruction after Fournier gangrene using rotation of a medial thigh fasciocutaneous flap. Report of a case in low-resource settings an

“Anesthesia-focused sonography”: first analysis of transferring a training from Germany to Ghana

Fibrin hydrogel as a novel delivery agent for local anesthetics: issues in demonstrating its efficacy at in vitro level