BACKGROUND：Isaria cicadae was well known as a rare entomogenous fungus with various pharmacological activities in traditional Chinese medicine, but less attention was paid to its other biological characteristics rather than the medical applications.

CONCLUSIONS: In the present work, IC-1 from Isaria cicadae GZU6722, has exhibited its excellent flocculating performance under various conditions, and also suggests its storage potential in cold and hot conditions. These findings imply that the application potential of this novel bioflocculant for wastewater bioremediation.

Flocculating process is widely used in various ﬁelds of industries, such as food production, fermenting process, water puriﬁcation and wastewater treatment [1]. In this process, the flocculants are classified into convent chemical flocculants and natural occurring flocculants such as bioflocculants [2]. Usually, the inorganic flocculants includes polyaluminum chloride (PAC) and the synthetic organic flocculants includes polyacrylamide derivatives. However, the excessive use of these chemical ﬂocculants can cause health and environmental problems [2]. For example, a residual aluminum from PAC and acrylamide monomers from polyacrylamide was reported to be neurotoxic and carcinogenic toward humans [3]. Recently, more and more researchers have paid much attentions to bio-ﬂocculants which could be an alternative for the chemical ﬂocculant for their high ﬂocculation performance, ecofriendly biodegradability [4].

Isaria cicadae, an entomogenous fungus, has been used as a therapeutic dietary in traditional Chinese medicine, which contains various pharmacological activities and applied as bio-control agents recently [11-13]. To date, much attention was paid to its medical applications, but there is still a lack of comprehensive and deep studies on its applications in environmental pollution remediations. In our previous work, Isaria cicadae has shown its good ﬂocculation performance [14], and yet little was known about its ﬂocculating properties and optimized condition for its better improvement.

Therefore, the aim of the present study is to screen the Isaria cicadae strains with high flocculanting activity, and to investigate the optimal culture conditions including the variations of culture medium. Furthermore, the bioflocculant produced by the strain was purified, and its composition and properties were identified as well for its potential application in the wastewater treatment, even in the drinking water purification with its low risk.

The strains of Isaria cicadae were isolated from the soils and the host from China and Korea, and were preserved at Institute of Fungal Resources, Guizhou University. The strains were maintained on Potato Dextrose Agar (PDA) slant at 4℃. The medium for slant was consisted of (g L-1): potato extract, 4; glucose, 20 and agar, 15; and the medium for subculture as consisted of (g L-1): glucose, 20; peptone, 5; KH2PO4, 2; MgSO4•7H2O, 0.5; and CaCl2, 0.5. Meanwhile the initial pH was 6.5 ± 0.2. In order to carry out the experiment, the spore suspension was resuspended to the desired concentration of 1×107 ml-1 by flooding the plate with distilled water after the slant cultivation at 22°C for 5 d. The biomass samples were ﬁltered and dried at 80℃ in an oven for 4 h. Distilled water was used to prepare all medium solutions and the media were sterilized at 121℃ for 30 min.

A kaolin suspension was used to determine the ﬂocculating rate of the bioﬂocculant in culture broth. Two gram of Kaolin clay (Merck, Germany) was suspended in 1 l of deionized water.

After 7d incubation, 1 ml culture broth were added into 100 ml kaolin suspension (5 g l-1) in 250 ml beaker, and the ﬂocculating activity of the active fractions that could ﬂocculate the kaolin suspension was measured. One ml of culture broth was added to 99 ml of kaolin suspension in a 400 ml beaker. The mixture was stirred slowly stirred at 80 rpm for 5 min. The optical density (OD) of the supernatant was measured with a spectrophotometer (GENESYS 10 UV, Thermo Scientiﬁc, USA) at 550 nm. In the control experiment, 1 ml of culture broth was replaced with 1 ml of fresh culture medium. The ﬂocculating rate was calculated according to the following equation:

where A550 and B550 were the OD550 (optical density at 550 nm) of control and sample supernatant, respectively.

Bioﬂocculant-producing strain with the highest ﬂocculating activity was screened to investigate the optimization of culture conditions.

2.3 Puriﬁcation and composition of the complex bioﬂocculant

The factors including carbon source, nitrogen source, culture temperature, rotating speed, initial pH, inoculum size and metal ions were investigated. To determine the effect of carbon and nitrogen sources on bioﬂocculant production, glucose was replaced with sucrose, maltose, starch, fructose (20 g L-1 for each type of carbon source), and peptone was replaced with NaNO3, NH4NO3, beef extract, yeast extract and urea nitrogen source (5 g L-1 for each type of nitrogen source). The initial pH of production media were adjusted at 2–10. Temperature of production media were adjusted at 25–35℃ and the rotating speed of the shaker was adjusted at 110-200 rpm. Accordingly, the inoculum size was used as 1, 2, 3, 4, 5, 6 ml spore suspension.

In addition, the effects of metal ions (CaCl2, KCl, NaCl, MgCl2 and MnSO4) were measured at the 1% (w/w) dosage. All experiments were conducted in triplicate.

The sequences of these regions were aligned with the sequence of Isaria farinosa using CLUSTAL X, and a phylogenetic tree was constructed using the neighbor-joining algorithm (MEGA version 5.2) with the bootstrap analysis of 1,000 replicates.

Statistical analysis was carried out using the SPSS statistical package (version 17.0 for Windows, SPSS Inc., USA), and all the plots were analyzed by Sigma Plot (version 11.0 for Windows, Systat Software Inc., USA). Mean values were calculated from 3 replicates. Least signiﬁcant difference (LSD) analysis was conducted to determine the differences among the treatments at the 0.05 probability level.

To provide an insight into phylogenetic information of the ﬂocculating activity, DNA were extracted from 36 strains and then the molecular analysis was performed. In Fig. 1, the phylogenetic tree was constructed con based on rDNA ITS1–5.8S–ITS2, EF1a,β-tublin sequences, revealing that all the 36 strains could be classified into four main groups with multiple subclusters as group A, group B, group C and group D.

Interestingly, although some strains belonged to the same group in Fig. 1, the ﬂocculating activity of these strains are very different from each other. For example, the strain GZUXC-1 and GZU3716 were in group C, but the ﬂocculating rate of GZUXC-1 was more than twice that of GZU3716. It was concluded that the ﬂocculating activity maybe not be related directly with the nuclear genes [19]. Furthermore, previous experiments have shown that the active substance was mainly the polysaccharide, which could not be directly coded by the nuclear genes [20, 21]. 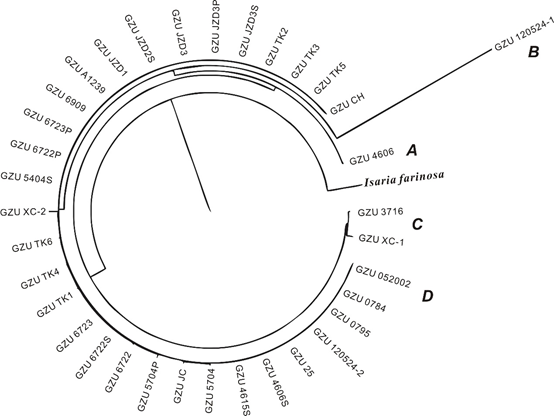 As seen from the growth curve of the strain in hydrolyzate-containing cultivation medium in Fig.2, the cells were in logarithm growth phase during 0–5 d, with a rapid growth period occurring during 0–3 d, and reached stationary phase since 5th d. On 7th d and onward, the cells were in death phase. The maximum biomass is 14.02 g in the 6th d, whereas the highest flocculating rate reached 79.96% in 7th d, which is later than the peak of the biomass. It indicated that the bioflocculant could be a kind of the secondary metabolite, produced from the primary metabolites in the growth. Fig.2 also showed the pH decreased during 0-3 d, and is around 4.5 since 3 d, which might be due to the presence of organic acid components of the bioﬂocculant. 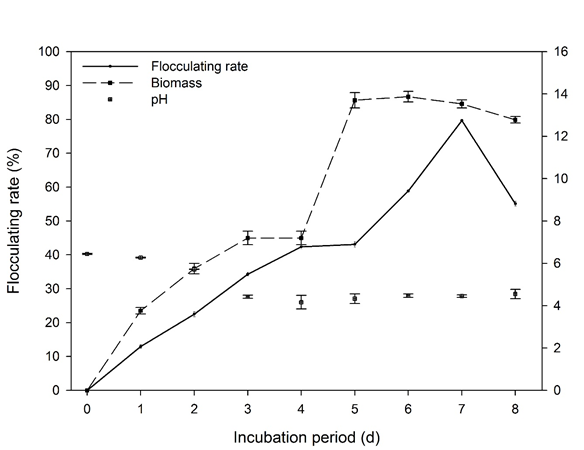 3.3 Distribution of ﬂocculating activity and composition analysis of the novel bioﬂocculant

The ﬂocculating rates of different fractions of the culture broth from Isaria cicadae GZU6722 were shown in Fig. 3. From Fig. 3, the supernatant had the highest ﬂocculating rate, while the washed cells had the lowest, which conﬁrmed that the ﬂocculating substance mainly distributed in the supernatant. It was the active secondary metabolite produced by the fungus but not their mycelia that had the ﬂocculating activity. This is similar to most strains capable of bioflocculating, such as Serratia ﬁcaria [24] and Rhizopus sp. [25]. 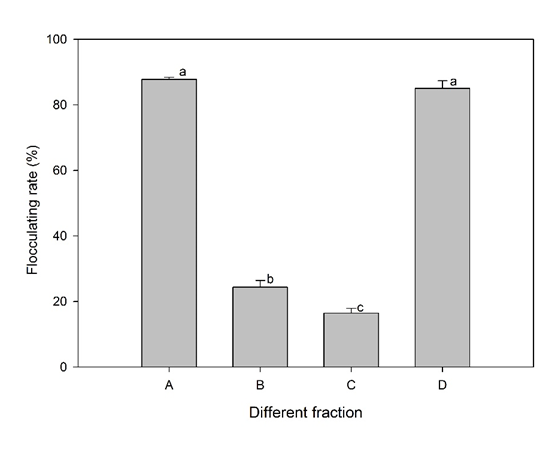 The chemical composition of the biofloccualnt by Isaria cicadae was analyzed by chromo-genic reactions, and the results were shown in Fig.4. The main component of biofloccualnt was identiﬁed as polysaccharide (91%) rather than protein (4%), which could be attributed to the thermal stability of the bioﬂocculant because protein denatured easily in boiled water [26, 27].

3.4.1 Effects of carbon, nitrogen sources and C/N ratio on the flocculating activity 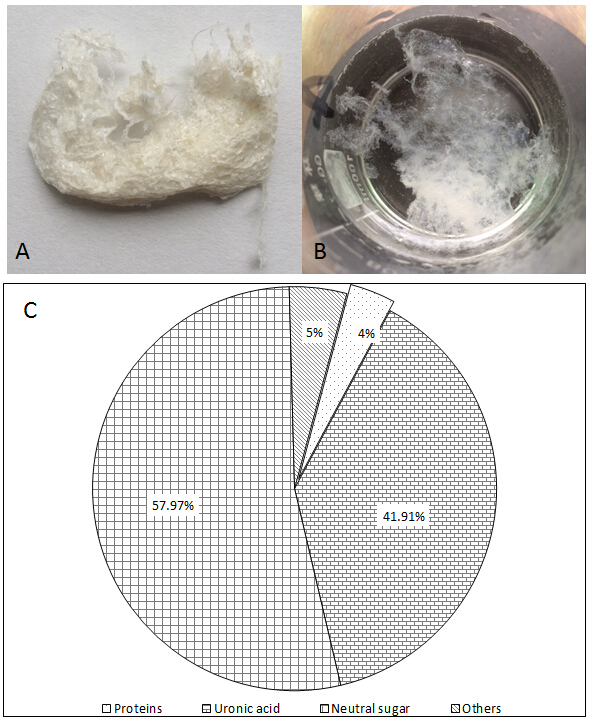 3.4.2 Effect of the initial temperature and pH on the flocculating activity

For most microorganisms the microbial product such as the bioﬂocculant regularly increase between the minimum and optimum pH, and a corresponding regularly decrease in microbial product between the optimum and maximum pH. This reﬂects the effect of varying pH on enzymatic reaction rates and nutrient absorption. Fig. 6B showed the effect of initial pH of culture medium on the flocculant activity. The production of bioflocculant dramatically increased following pH variation from 2 to 4, and stable at pH range from 4 to 8, within which, the maximum ﬂocculating rate was 93.83%. Thus, pH 8 was selected as the initial pH in the following experiments.

3.4.3 Effect of the air amount and the inoculum size on the flocculating activity

Microorganisms used in this study were all aerobic ones and large amount of air should be supplied during their growth. Accordingly, the culture medium volume in flask and the rotating speed can affect the air quantity directly, i.e., large amount of the medium in flask makes less air left, so that microorganisms will grow slowly under this condition, thus causing the decrease of the ﬂocculating rate. Fig. 6C and Fig. 6D showed the ﬂocculating rates of culture broth produced by cultivating at different rotating speed and various culture volume of medium in 500 ml ﬂask, respectively. The results indicated that when the proportion of culture medium volume and flask cubage was under 1/2, the air quantity in the flask would maintain the growth of microorganisms under stirring function, which had little effect on ﬂocculating activity of the produced bioﬂocculant.

3.4.4 Effect of the metals on the flocculant activity

Commonly, cations are applied to neutralize the negative charges of cation- dependent bio-ﬂocculants and kaolin particles, thereby increasing the adsorption of bioﬂocculant onto kaolin particles [31]. The results showed that the ﬂocculating activity of the bioﬂocculant was Ca2+-dependent, if there were no Ca2+ added, the ﬂocculating activity was about 76.65% at optimum condition. This agreed with the reports that many microbial ﬂocculants were cation-dependent [23]. 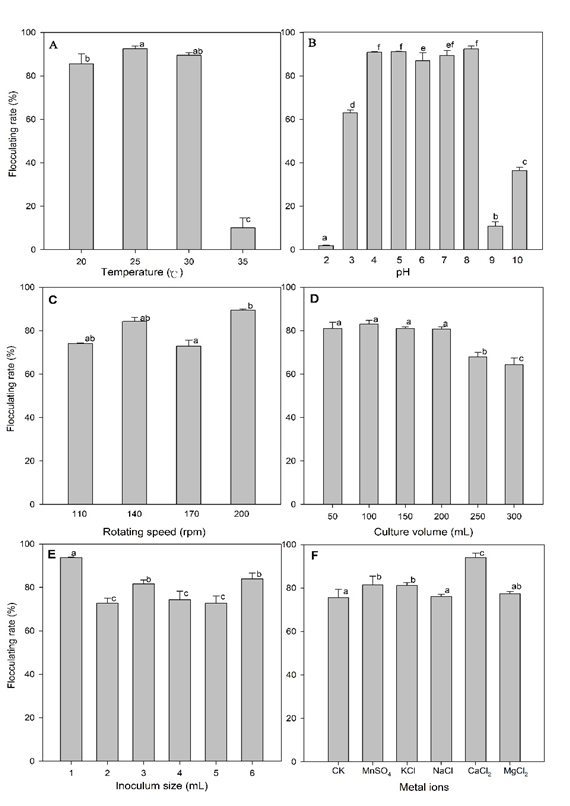 Fig.6 Effect of various culture conditions on the floccualting activity of the bioflocculant. (A) Culture temperature, (B) Initial pH in the culture medium, (C) Rotating speed of the shaker, (D) Volume of the culture, (E) Inoculum size and (F) Metal ions. Error bars indicate standard deviation of triplicate experiments. Significant differences among different treatment are indicated by lowercase (p<0.05).

Currently most of bioflocculants have attracted research and industry interests, as alternative flocculant, due to their high flocculation performance, ecofriendly, and biodegradability. A number of investigations using different microbial flocculants for the treatment of different types of wastewater have been carried out, such as removing suspended solids (SS) of coal washing wastewater treatment, decolorization for dye solution and improving performance of activated sludge. In the present work, a strain of Isaria cicadae GZU6722 with high flocculanting activity was screened, and its bioflocculation characterization was investigated for the first time. This study showed that Isaria cicadae GZU6722 is an outstanding bioﬂocculant-producing strain, it produced bioﬂocculant named as IC-1. The bioﬂocculant optimally produced with sucrose and beef extract under wide range of environmental conditions. IC-1 showed excellent ﬂocculating rate of kaolin suspension, especially with CaCl2 addition. According to the data, IC-1 mainly consists of polysaccharides that explain its thermo-stability over wide range of temperatures, and also suggests its storage potential in cold and hot conditions. The present work has demonstrated that IC-1 has a potential application for the wastewater treatment, and it can be used as an alternative to common chemical flocculants in actual treatments. The next step is to improve the application feasibility of the bioflocculant in the treatment of the wastewater.