Methods: County TBD data for the period 2009 to 2016, were obtained from the Epidemiology Resource Center at the Indiana State Department of Health. Using the 2010 decennial population census, we normalized TBD counts to derive incidence rates per 1,000 population. We classified Indiana counties as either rural, rural-mixed, or urban based on population size. We used Kruskal-Wallis nonparametric test to determine if median TBD incidence rates differed between urban, rural, and rural-mixed urban counties. We used choropleth maps in ESRI ArcGIS to display TBD incidence rate by county classification.

Conclusion: A classification of Indiana counties based on population size is inadequate in identifying counties with a greater or lesser risk of TBD incidence. For a better understanding of county population-level TBD risk, future studies should aim at obtaining and exploring TBD incidence data at more granular, sub-county population levels such as zip codes, census- blocks and tracts.

Within the past 2 decades tick-borne disease (TBD) incidence rates in the United States (U.S.) have seen an upward trend. [2] Beyond the rise in reported cases, the health, economic, social, and community impacts of tick-borne diseases are significantly high. [3-5] The bite of an infected tick is the single biggest risk factor for TBD diagnosis, and this is significantly associated human exposure to ticks either at residential, recreational or occupational environments. [6-8] Previous studies have shown that the risk factors for tick exposure and TBD include gender as male, older adults, pet ownership, residential or occupational exposure to tick habitat. [9-11] Given that these risk factors are not static, it is important to understand how they vary across spatial locations. This is critical for developing location-specific risk-reduction policies and interventions.

For the most part, surveillance data of TBD incidence in the U.S. are compiled at the county level, with limited information provided at individual case levels. [12] Under this scenario, we need to determine whether unique risk factors are present in some counties, thereby predisposing such counties to higher TBD incidence rates. Across the U.S. counties have been variously classified as urban or rural depending on population size, administrative boundaries, land-use patterns, economic influence, and subjective opinions of ‘county identify’. [1, 13-15] For TBD risk assessment, it is important to select a classification system that groups counties based on the presence or absence of the most obvious risk factors for tick exposure. [9, 16, 17] Previous studies of TBD incidence have mostly focused on individual risk factors, which do not match up existing county-based data aggregates. [11, 18, 19] Conversely, studies which have looked at county-level TBD risk were primarily focused on the geographic expansion, or severity of disease. [20, 21] These studies are limited in the sense that they do not match existing county-level data with local risk. From a population health perspective, county or community level factors are important in the assessment of TBD risk. Particularly, in Indiana where spatial clustering of TBD has previously been reported, it is important to understand how TBD incidence rate vary based on county classifications. [10] Using a modified Ayres, Waldorf [1] Indiana county classification, the objective of this study is to determine if significant differences in tick-borne diseases incidence rates exist across counties in Indiana, U.S. Such information can inform policy, evidence-based interventions, and future research. Our primary hypothesis is that no significant differences in tick-borne diseases incidence rates exist between rural, rural-mixed, and urban counties of Indiana.

The count of Lyme disease, Ehrlichiosis, Rocky Mountain spotted fever, Tularemia, Typhus/Rickettsial disease cases for the period 2009 to 2016, were obtained from the Epidemiology Resource Center at the Indiana Department of Health, for all 92 counties in Indiana. Counties without TBD data were coded as ‘Nil’ for the purpose of analysis. First, we collapsed all TBD count data by county for the entire period to derive a “total TBD” count. Next, using the 2010 decennial population census of Indiana counties, we normalized TBD counts and derived TBD incidence rates per 1,000 population. [22] We classified Indiana counties as either rural, rural-mixed, or urban, using a modified Indiana county classification system of Ayres, Waldorf [1] (thus: < 40,000 population = “rural county”; 40,000 – 100,000 population = “rural-mixed county”, and > 100,000 population = “urban county”). This resulted in 56 (61%) rural counties, 19 (21%) rural-Mixed counties, and 17 (18%) urban counties. The difference in TBD incidence rate between these three county classifications were assessed.

We used summary statistics (mean, standard deviation, median, and skewness) to describe TBD incidence rate. Initial examination revealed that TBD incidence rate was highly right-skewed (mean = 0.313, median = 0.116, mode = 0). For this reason, we applied a log and square root transformation to see if normality of the data could be achieved, so that parametric methods of statistical inference are applied. The presence of zeroes in the data required an adjustment to the log transformation.

The transformations did moderate the skew, however no transformations were found to alleviate the issue of non-normality (Shapiro-Wilk test, p ≤ 0.0004). For this reason, we used Kruskal-Wallis nonparametric test to determine if median TBD incidence rates differed between urban, rural, and rural-mixed urban counties. Given the presence of ties in the data, we used a permutation version of the Kolmogorov-Smirnov test with 10,000 permutations to test the main assumption of the Kruskal-Wallis test (i.e. shape of the distribution for each group is the same). We centered TBD incidence rates for each county classification on its median so that all groups shared a median of zero. We created choropleth maps using natural breaks classification in ESRI ArcGIS to display the total TBD incidence rate, first across all Indiana counties (unclassified), followed by rates by county classification. Finally, we used a side-by-side box plot to determine the relative dispersion of TBD incidence rates across the 3 county classifications. 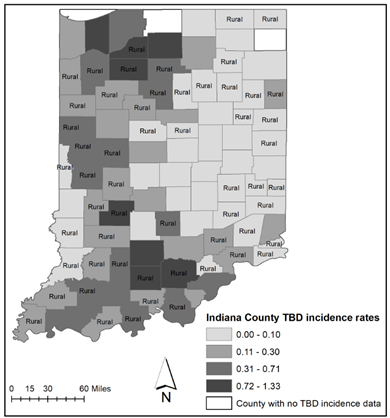 Figure 3 represents a side-by-side boxplot of TBD incidence rate for the rural-mixed, rural, and urban counties. As seen in the figure, the boxplots in general have the same relative dispersion and center, though rural counties seem to have a somewhat larger relative dispersion. The Fligner-Killeen test for homogeneity of variances revealed weak evidence of heterogeneity (p = 0.0658). [23] 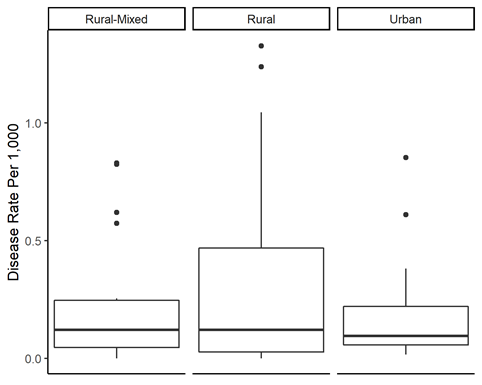 Analyzing data of county-level tick-borne disease incidence provide an opportunity for population-level risk assessment, which is important for efficient resource allocation in public health promotion. [24] Our goal in this study was to determine if significant differences in tick-borne disease incidence rates in Indiana, existed based on rural-mixed, rural, and urban county classifications. Our summary statistics revealed important regional differences in TBD diagnosis prevalence rates. More specifically more counties in western Indiana had higher TBD incidence rates compared to eastern Indiana, eastern region had more counties with zero TBD incidence rate, and a cluster of higher TBD diagnosis prevalence rates occurred within the southwestern and northwestern regions. When tick-borne disease incidence rates were mapped by county classification, we noted higher rates in rural counties. However, given that there are almost three times as many counties classified as rural, compared to rural-mixed or urban, it is quite possible and perhaps should be expected that by chance, the higher TBD incidence rate counties are rural.  However, when Indiana counties are classified based on population size (i.e. rural-mixed, rural, and urban), we found that tick-borne disease incidence rates are not significantly different. In a previous study we reported the presence of spatial clusters of self-reported TBD diagnosis in both the Southeast and Southwest of Indiana. [10] Viewed in the light of previous studies, the main contribution of the current is that while certain Indiana counties have a higher risk of TBD incidence, creating county categories based on population (rural-mixed, rural, and urban) is unable to detect Indiana counties with a higher risk of TBD incidence.

Despite these limitations, it is important to emphasize that there are several benefits to assessing TBD incidence risk at the county level. First, this is the most common and accessible level of data collection. Secondly, many policy decisions are implemented at the county level, thus identifying Indiana counties with higher TBD incidence risk helps in identifying where people are most at risk.

We gratefully acknowledge the assistance of the following members of the Indiana State Department of Health, Epidemiology Resource Center for their help with data acquisition: Dr. Jen Brown, Taryn Stevens, Hilari Sautbine, and Eric Hawkins.