The best yields of extraction (51.7%) were obtained with water-methanol mixture by using an accelerated solvent extractor (ASE) under pressure at 100 bars. The extraction obtained with water at atmospheric pressure was close to ASE extraction (49.8%). However, the composition of CNSL varied among these different operating conditions. Chemical composition of the extracted oil by ASE or by atmospheric pressure extraction showed minor difference in their composition. The quality of the analyzed extracts was almost equal in cardol, cardanol, anacardol and anacardic acid contents.

Cashew nut comprises the shell and the kernel. While the kernel is nutritionally valuable, the shell which represents around 50 % wt. of the cashew kernel (Rodrigues et al., 2006) has been considered as residue of cashew nut production, which may be an environmental problem if it is not handled properly.

CNSL is a versatile raw material and has many industrial applications with 200 patents. The most important use of CNSL is for the manufacture of friction modifying material for brake lining, clutch facing and industrial belting (Mwangi and Thiong’o, 2013).

Extraction of CNSL is carried out by various methods that are discussed in detail in the literature. The variability of composition depends on extraction method but in general, the composition of natural CNSL is a mixture of anacardic acid, cardanol, cardol and 2-methyl-cardol in smaller quantities (Rajesh et al., 2011). 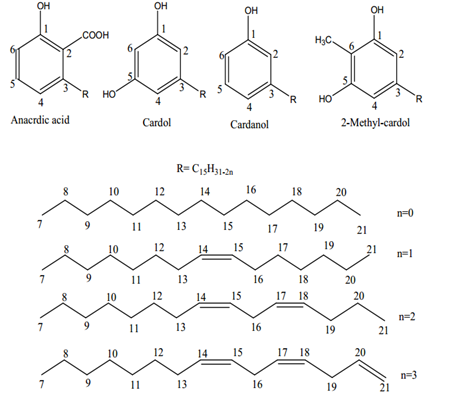 Various methods have been reported in literature for the extraction of CNSL from CNS, which included, open pan roasting, drum roasting, hot oil roasting, cold extrusion, solvent extraction, etc. CNSL solvent extraction methods are various, but all require fairly large technical facilities and use chemicals which are sometimes toxic and expensive and under specific extraction conditions.

The objective of this study was to simplify the extraction of CNSL using an inexpensive solvent (preferably water) to get an efficient and inexpensive method of extraction that will be easy to set up while guaranteeing a CNSL quality and extraction yield comparable to already known solvents.

Cashew nut shell was purchased from "Agribusiness Mali" located in Bamako, Mali and conditioned in a room at 20°C and at a relative humidity of 66% for more than 72 h in order to have a homogeneous biomass. Extraction was performed without prior grinding.

Five grams of raw cashew shell were placed in the ASE extraction cell. Cell were purchased from Thermo Scientific Dionex ASE; the model 150 Stainless Steel Extraction Cell was used to perform CNS extraction. The Cell volume is 10 mL and it is fitted with end caps, seals, and O-rings.

ASE was programmed with a number of extraction cycles per cell and the temperature was set according to the solvent used.

The five extraction solvents used were distilled water, hexane, methanol, acetone and a 50/50 (w/w) water-methanol mixture. Three extraction cycles permitted to extract the maximum amount of CNSL. Each extraction cycle lasted 20 min. The extraction temperatures on ASE have been regulated according to the nature of the solvents, at certain temperatures some solvents become volatiles. The setting temperatures were as follows: 60°C for acetone, 120°C for hexane, 80°C for methanol, 100°C for water and 80°C for the 50/50 water-methanol mixture (w/w) and all extractions series were carried out under pressure at 100 bar. The volume of solvent injected per cell varied according to the filling of the cell; on average 6 mL of solvent were injected per cell. A tube was weighed and placed on each cell in order to collect the CNSL. An extraction program with 3 cycles of 20 min per cell was used and the extracts were placed under a hood to evaporate the residual solvents for 12 h then dried in an oven at 70°C for 24 h, then weighed in order to calculate extraction yields.

After CNSL extraction under pressure water (ASE), the same protocol (described above) was applied with water without pressure in order to compare the effect of pressure on the efficiency and yield of the extraction. At the end of the extractions, the tube containing the CNSL was collected then the solvent was evaporated (under a hood) then dried in an oven at 70°C for 24 h to remove the humidity and the residual solvent and then it was weighed to calculate the extraction yield.

Where h is humidity. Each extraction was performed in triplicate.

Five g of raw cashew shell were placed in a 500 mL glass flask filled with 100 mL distilled water and the whole was heated at 100°C for 2 h. These extractions were carried out during 4 h in order to study the effect of contact time on the extraction yield.

Subsequently the same extraction method was applied but by increasing the volume of the solvent (water) to 200 mL under the same conditions for 2 h in order to study the efficiency of the extraction according to solvent volume.

At the end of the extractions, CNSL was recovered in tubes after solvent evaporation in the hood and the extracts were dried in an oven at 70°C for 24 h to remove the moisture and the residual solvent and they were weighed to calculate the extraction yield.

CNSL samples resulting from the various extractions were analyzed by GC-MS and HPLC-UV in order to characterize them and to evaluate the effects of the extraction conditions on their composition. The standard solutions were prepared according to Table 1.

Internal standard (phenol D6) 100 µL was added to each 1 mL calibration solution. Samples were prepared with 50 mg of extracts (CNSL) dissolved in 10 mL of acetone then 1 mL was taken and 100 μL internal standard was added.

The 4 cardanol peaks are integrated together. The area is divided by the area of the internal standard and the calibration line is drawn (Fig 3). 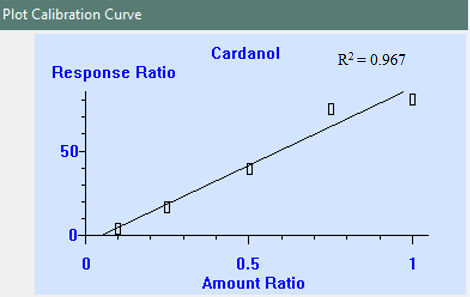 HPLC-UV analysis were performed with Dionex HPLC-System with autosampler 465. 2x Pump 420 and Degaser ERC 3512. HPLC-System was equipped with a diode-array detector and a refractometer.

Fig. 4. Chromatogram of a sample and identification of compounds by HPLC-UV.

The correlation coefficients calculated for all the compounds (cardanol, anacardol and anacardic acid) were quite high with an average R2 = 0.982. 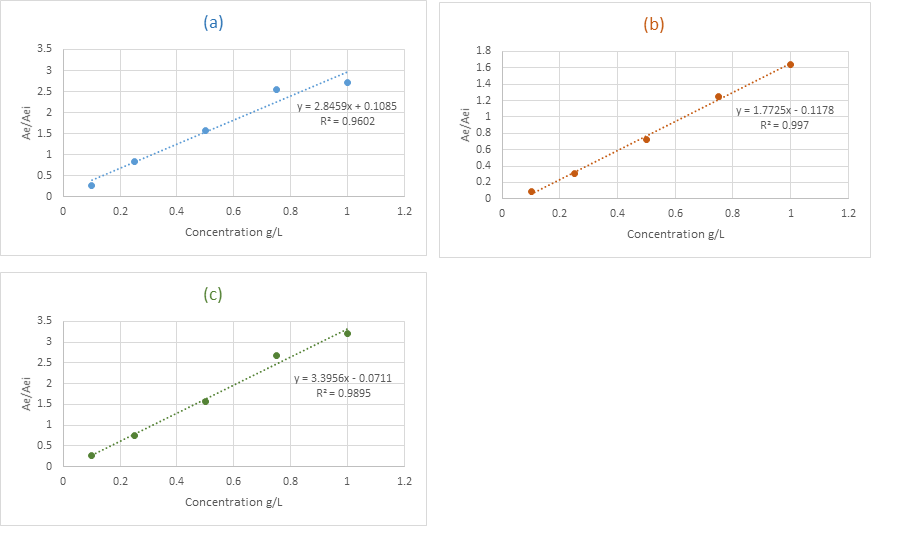 Fig. 5. Calibration curves in HPLC for (a) cardanol, (b) anacardic acid and (c) anacardol (Ae/Aei=f(concentration g/L)

When extracting CNSL by ASE, different extraction yields were obtained that varied depending on the solvent used and the number of extraction cycles applied (Fig. 6). 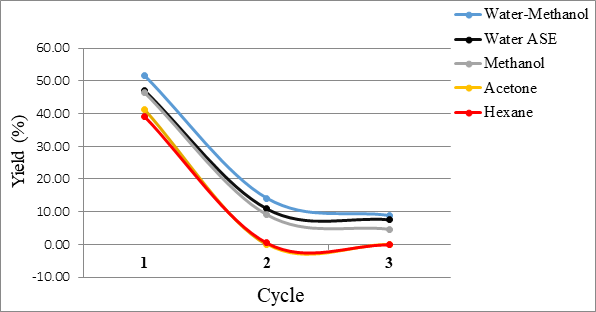 Fig. 6. CNSL extraction by ASE according to solvents and cycles

This was due to the extraction of lipophilic compounds that were extracted during the first cycle. Finally, the application of the third and last extraction cycle on the same sample gave the following additional extraction yields: 7.93% for 50/50 (w/w) water/methanol, 7.54% for water and 4.63% for methanol. The extraction yields for hexane and acetone logically remained below 1% meaning no more CNSL extraction.

However, despite the decrease in extraction yields over the 3 cycles, the 50/50 (w/w) water/methanol, water and methanol showed their extraction limit only after the third extraction cycle and that without reaching a zero-extraction residue. The greatest CNSL extraction yield was obtained during the first extraction cycle, which was explained by the high availability of CNSL due to large exchange surfaces between solvents and samples.

Extractions were performed in triplicate for each cycle in order to estimate extractions methods limits and errors and to evaluate the real differences between solvents. We calculated the error standard according to the equation below.

The extraction yields at cycle 1 error standard for acetone, hexane, water-methanol, methanol and water were respectively 1.86. 1.62. 1.31. 1.07 and 3.15. Except water. All the solvents showed a good extraction repeatability and extraction yield obtained present low standard errors.

The standard error for water extraction method under pressure (100 bars) was larger and we assume that it was related to the fairly high extraction temperature (100°C). At this temperature, there could be minor losses of water by evaporation, and this could explain these differences between the three repetitions that were experimentally as follow 47.20. 44.88 and 52.52%.

Carrying out the same calculation (error standard) for cycles 2 and 3 did not seem enough relevant for us, because after cycles 1 some solvents have already shown their extraction limits (acetone and hexane) and the other solvents having undergone and cycles 2 and 3 gave fairly low and heterogeneous extraction yields.

By comparing, the different extraction yields obtained by ASE and regardless of the extraction cycle. According to their CNSL extraction efficiency, the solvents used can be classified in increasing order of extraction yield efficiency which is as follows: water-methanol mixture (50/50 w/w), water, methanol, hexane and acetone (same yield). 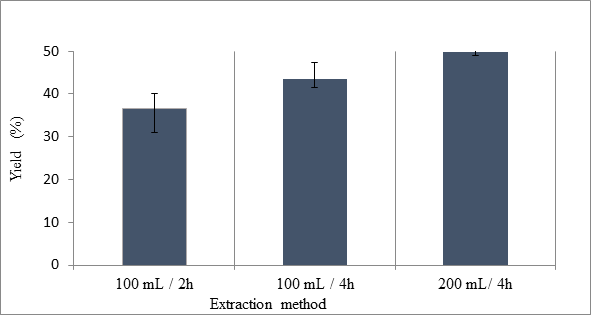 In order to compare the reliability of the water extraction methods at atmospheric pressure we calculated the higher and lower error values corresponding respectively to the highest and lowest extraction yields of the three replicates.

The calculation of the differences between the mean extraction yield (obtained from the three replicates) and the higher and lower errors showed a certain heterogeneity with 100 mL / 2h water extraction method.

Comparison of the error rate between the two methods (200 mL / 4h and 100 mL / 4h) gave an error rate of 2.07% which is relatively low and confirmed the overall data (200 mL / 4h method was the best extraction yield). It can be seen that by increasing the extraction time and water volume. CNSL extraction at atmospheric pressure was more efficient with fewer errors.

The samples analyses were made using an Agilent 6890 gas chromatograph equipped with an Agilent 5973 mass selective detector coupled to an FID.

The measured area (Fig. 8), permitted to calculate the concentrations of each extract (Table 2).

The results of GC-MS analysis showed that the concentration of pure CNSL in the samples varied greatly depending on the extraction solvent used. The CNSL highest amount per extract was obtained with hexane (66.8 %) and in contrast, methanol extraction showed CNSL lowest amount (30.4%).

The samples were integrated in Fig. 8 and the concentrations were calculated (Table 3). Depending on their retention time, the compounds (cardanol, anacardic acid and cardol) were identified and their concentrations per extract were determined. The cardol concentration was calculated using the cardanol calibration curve.

High content of cardanol in water ASE extract was likely the result of the high temperature used in the extraction hot water (100°C) at 100 bar pressure). Anacardic acid was easily degraded by decarboxylation process to form cardanol at high temperature (Philip et al., 2008). A slight difference of cardanol content was found between acetone extract and water-methanol extract.

These results also show that anacardic acid concentration was not affected by the extraction method used (average concentration of 0.07 g/L ± 0.5 for all extracts).

Results given in Table 4 show water-ASE extraction yielded the highest concentration of  compounds (27.0 %) followed by hexane extraction with its content of  23.8%, while  methanol  extraction resulted in low extract yield (12.2%). This result is in agreement with the previous work reported by Setianto et al. (2009).

Compounds of interest like cardol and anacardic acid were highly concentrated in extracts from water-ASE and hexane extraction methods (0.85 g/L and 0.07 g/L respectively).

However, it is important to note that GC-MS and HPLC-UV analyzes did not give the same quantitative result on CNSL major compounds (cardanol, anacardol and anacardic acid). The adjustment of the values will be necessary by injecting a cardol standard. Another improvement would be to try to inject anacardic acid at a lower temperature in GC-MS, in order to avoid its degradation.

The proposed extraction method, based on aqueous extraction, allows very good yields to be obtained, higher than those usually obtained by solvent extraction, therefore more respectful of the environment but above all applicable in developing countries without the cost of exorbitant protection.