a Environment and SustainabilityDepartment, CSIR-Institute of Minerals and Materials Technology, Bhubaneswar-751013, Odisha

Among them, Ag/TiO2 system is of immense importance and has been a subject of interest in the field of photocatalytic degradation of environmental pollutants. Khan et al. studied the photodecomposition of methylene blue (MB) in an aqueous solution using synthesized Ag-TiO2 nanocomposites under visible light irradiation [11]. The excellent photocatalytic degradation efficiency of Ag–TiO2 microwires were studied by Mandal and Bhattacharyya, 2012 [12]. Nainani et al. studied the photocatalytic efficiency of Ag-TiO2 towards degradation of methyl orange [13]. Enhancement in the photocatalytic oxidation of oxalic acid by silver deposition on a TiO2 surface is studied by Szabó-Bárdos et al. [14].

In the present study, we have first time used aqueous leaf extract (both dry and fresh leaf extract) of Averrhoa carambola L. (Order Oxalidales, family Oxalidaceae) for the biomimetic synthesis of Ag/TiO2 nanocomposites. The biomolecules such as reducing sugar, proteins, flavonoids and mainly the carambolaflavone present in the leaf extracts act as reducing, capping and stabilizing agents in the synthesis Ag/TiO2 nanocomposites [18, 19]. The biosynthesized Ag/TiO2 composites showed remarkable photocatalytic activity towards degradation of MO.

1 gm of Degussa P-25 TiO2 was mixed with 20 mL of distilled water in a beaker and stirred for 30 mins. 187 mL of 1 mM AgNO3 solution (0.02g Ag) was added dropwise for 2 hrs with vigorous stirring. The pH of the resulting suspension was maintained to 5.5 to 5.6 by adding 0.01 N NaOH solution. Then 47 mL of aqueous LE (equivalent to ¼ th of AgNO3 solution used-since this concentration was found to be appropriate from spectroscopic and kinetic studies, Fig. 1) was added at a time to suspension and stirred for 4 hrs vigorously. The colour of the suspension was changed from white to brown and then it was centrifuged. The residue was washed for two times with DI water followed by centrifugation. Finally, the residue was washed with ethanol and centrifuged to collect the residue. The residue was dried overnight in an incubator at 300 C. Then, the residue was subjected to calcination in a muffle furnace for 4 hrs at 4500 C at a rising temperature rate of 50 C/ min. The two catalysts prepared by the above method are labeled as Ag/TiO2-FLE and Ag/TiO2-DLE. Similarly, Ag/TiO2-C is prepared using NaBH4 as reducing agent in place of LE. 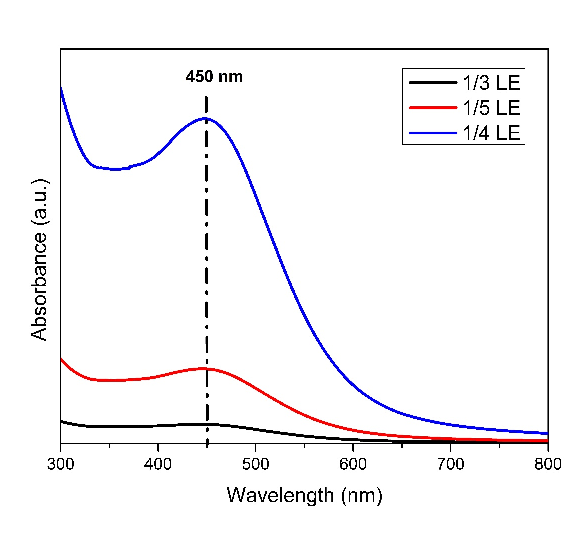 The photocatalytic degradation of MO was carried out by taking 20 ml of 100 mg/l MO solution in a 100 ml flask, over 1.0 g/l of catalyst. The solution was exposed to sunlight with constant stirring. In all cases, the mixture was kept in the dark for 30 minutes to ensure that the adsorption-desorption equilibrium was reached before irradiation. After visible light irradiation, the sample was withdrawn from the suspension at every 60 minutes during irradiation for the determination of change in absorbance of MO. The catalyst was removed by centrifugation and MO content in the solution was analyzed quantitatively by light absorption at 464 nm.

Where a= absorption coefficient

n= Type of transition in a semiconductor.

It is a direct transition if n = ½ and indirect transition for n = 2. Here the value of n for all the synthesized compounds was taken as 1/2, which confirms that optical transition of nanocomposites are directly allowed [20]. The band gap energy of all the composites are approximated from the plot of (ahυ)n vs hυ by extrapolating the straight line to the X axis intercept. The band gap energies of TiO2, Ag/TiO2 FLE, Ag/TiO2 DLE were found to be 3.12, 2.98, 2.90 eV respectively (Fig. 2 B). The low band gap of Ag/TiO2 DLE and Ag/TiO2 FLE nanocomposites indicates that they have tendency towards visible light motivated photocatalytic ability.

For pure TiO2 all peaks are well indexed as the anatase phase (JCPDS card No. 83-2243). The XRD patterns of Ag/TiO2 nanocomposites (Fig. 3) almost coincide with that of pure TiO2, and no diffraction peaks is observed for Ag, thus suggesting that the metal particles are well dispersed on the surface of TiO2. Ag/TiO2 nanocomposites did not show any peak shift, indicating that the TiO2 matrix was well maintained as the anatase phase which indicates that the metal dopants are merely placed on the surface of the crystals without being covalently bonded into the crystal lattice. The presence of Ag on TiO2 is also confirmed by EDX spectra which detected Ag element. The average crystalline sizes were calculated by Scherrer equation and found to be 72.29 nm and 76.17 nm for FLE and DLE induced Ag/TiO2 nanocomposites respectively. 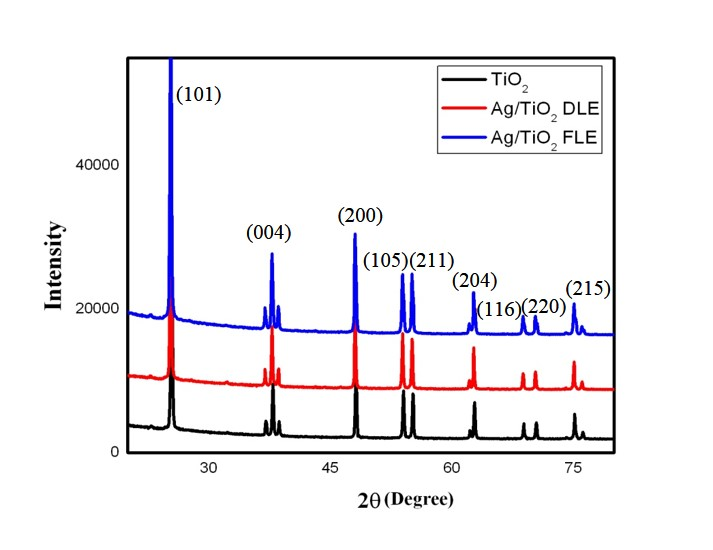 The synthesized Ag/TiO2 nanocomposites were characterized by TEM which shows somewhat uniformly distributed AgNPs on titania (Fig. 4). TEM micrographs show a variation of AgNPs size in the range of 1-13 nm. The average particle size of AgNPs was found to be less than 10 nm in the case of both DLE and FLE induced NPs. The presence of silver was confirmed by EDX spectroscopy.

With an increase in no. of AgNPs, in the case of Ag/TiO2-DLE, the catalytic activity is enhanced compared to Ag/TiO2-FLE, due to the SPR effect of AgNPs. When the Ag/TiO2 nanocomposites are irradiated (Fig. 5 B) with visible light, the electron from the valance band (VB) of Ag migrates to the conduction band (CB), by absorbing a photon. As a result, the electrons and holes are formed on the surface of the AgNPs. Many researchers reported that due to the SPR effect, the electrons in CB of Ag transferred to the conduction band of TiO2 [21, 22]. Herein, the electrons generated on the surface of the AgNPs due to the SPR effect, migrated to the CB of TiO2 and there they get trapped by the adsorbed oxygen molecules leading to the formation of superoxide radicals. These superoxide radicals and the trapped electrons can combine to produce H2O2, finally forming hydroxyl radicals. The holes formed on the surface of the AgNPs are trapped by water molecules to produce reactive hydroxyl radicals.  Those superoxide radicals and hydroxyl radicals anions (strong oxidants) then oxidize the organic pollutant (MO) on the surface of the nanocomposite.

Fig. 5 (A) Degradation of MO using Ag/TiO2-FLE, Ag/TiO2-DLE and Ag/TiO2-C; (B) Schematic diagram of enhanced photocatalytic activity of Ag/TiO2 nanocomposite

The authors thank Director, CSIR-IMMT, for providing the facilities to carry out this work and CSIR for funding the project.