Considering pharmacophore features of known protein kinase inhibitors we created virtual library of new 4-methylbenzamide derivatives. Docking of target structures was performed using nine cancer-related protein kinases as receptors. Docking protocol was validated using approved kinase inhibitors. Protein-ligand complexes with the best score were treated by visual inspection and the structure 7 containing benzimidazole k for ATP-site and fragment of 3-(4-methyl-1H-imidazole-1-yl)-5-(trifluoromethyl)aniline f was considered as the most promising substance. Based on docking results, the most favorable structures were evaluated via molecular dynamics with MM/PBSA free binding energy calculation showing in some cases comparable with known inhibitors results in terms of total binding energy, polar and non-polar interactions with best result -160.0 kJ/mol for T315I-mutant ABL kinase. Mean binding energy for approved kinase inhibitors was -161.0 kJ/mol. It was shown, that directed structural modifications of initial structures could further increase calculated binding energy. The combined docking and molecular dynamics results suggest that proposed structures could be valuable objects in the development of new kinase inhibitors with the derivatives of 4-[(1H-1,3,-benzodiazole-2-yl)methyl]-N-phenylbenzamide being most promising ones having docking score of -12.6 and binding energy of -157.6 kJ/mol in the respect of human ABL kinase.

Targeted therapy is a modern approach for the treatment of various cancer diseases, which aims to treat cancer specific biological targets [1]. Small-molecule protein kinase inhibitors (PKIs) constitute the essential part of targeted therapy options with more than 30 drugs approved so far [2]. Kinase activity in cancer cells is often deregulated altering cell signaling pathways thus increasing cell proliferation. PKIs selectively bind to the active site of a cancer-related protein kinase and suppress its biological functions. PKIs have shown great effectiveness in cancer treatment, but their use is often limited due to serious side effects as well as several types of resistance including point mutations of original kinase [3-5]. Hence, new kinase inhibitors that are more selective and can override current limitations are of great need.

In this work new derivatives of 4-methyl benzoic acid amides have been evaluated in silico as kinase inhibitors using combined molecular docking and molecular dynamics approach.

Combinatory method was used to create library of target structures starting from 4-methyl-benzamide (Fig. 1). Molecule of nilotinib was used for modeling as a reference structure. Nilotinib is a second-generation tyrosine kinase inhibitor which targets BCR-ABL tyrosine kinase in inactive conformation. Being a type II inhibitor nilotinib exploits inactive kinase conformation to get additional interactions in the allosteric pocket of kinase binding site. Hence, the structure of nilotinib could be divided into three regions: ATP-site fragment, allosteric fragment and hydrophobic linker (Fig. 2) [9]. 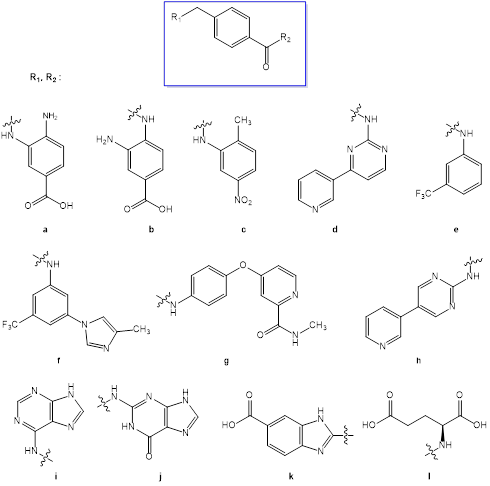 Target structures were design in the way to maintain the main pharmacophore features of nilotinib: amide bond for allosteric site interactions as well as heterocycle aromatic system for π-π stacking and hydrogen bonds formation in ATP site. The key difference of target structures compared to niltotinib is utilizing p-position to come out from benzamide linker into ATP-binding site instead of m-position in the case of nilotinib. Similar linker choice could be seen in modern protein kinas inhibitors such as sorafenib and rebastinib (Fig. 2). On the other hand, binding sites of kinases are known to have a lot of similarities between different classes of the enzymes. That’s why we consider proposed linker modification to be promising for discovering new kinase inhibitors. 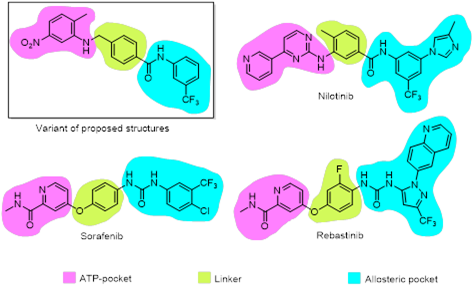 Docking was implemented using AutoDock Vina software [10]. Forty complexes of different protein kinases with approved kinase inhibitors were chosen from Protein Data Bank (PDB). Complexes were filtered to give only nine complexes of type II inhibitors [11]. Proteins were extracted and used as receptors for docking. The structures of these receptors were minimized to give nine additional receptors (Tab. 1). Preliminary, the docking validation was performed using original ligands of PDB-complexes [12]. Ligand structures were extracted and minimized using two different force fields: Merck Molecular Force Field (MMFF94s) and Generalized Amber Force Field (GAFF). Minimization of original ligands was performed to imitate their construction from scratch without knowing real binding mode. As a result, three ligand structures were obtained for each PDB-record. Docking results of these ligands were further used as binding affinity threshold to filter target structures. Further, for each target structure three geometric conformers were generated considering that AutoDock Vina is not able to change any valent angles in ligand during the docking. All final conformers were docked and docking results were filtered to give protein-ligand complexes for further molecular dynamics studies.

All chemical structure file format conversions were done using Open Babel [13]. Ligands from PDB-complexes were extracted by copying of HEATATM section of pdb-file. Two-dimensional structures were created with Marvin Sketch [14]. 3D-structures were generated using Molconvert [15]. Conformations generation and structure minimization were performed using Open Babel genetic algorithm. Missing protein residues were restored with MODELLER [16]. Water and ions were removed from receptors. GROMACS with AMBER FF99SB-ILDN force field was used for obtaining minimized receptors. Binding site coordinates of receptors were determined by the size of an original ligand in PDB-file and were scaled-up by 20% in each dimension. Docking results were limited by only one docking pose with the best docking score. Preparation of ligands and receptors for docking was carried out in MGL Tools [17]. Visualization of docking results was made in Chimera [18].

Table 1: PDB-complexes of type II kinase inhibitors used for docking and binding energy calculations along with the docking scores and RMSD values obtained for the original ligands

Figure 3: The number of conformations with docking score better than -11.5 and number of appearance of different structural fragments in them for minimized (red) and non-minimized (blue) receptors

In the case of non-minimized receptors, total number of conformations with the score better than -11.5 was 75, which corresponded to 50 unique ligand structures. For minimized receptors this docking score showed 28 conformations and 18 unique structures. Benzimidazole k was the most common structural fragment for above-mentioned poses (Fig. 3). Fourteen ligand structures showed docking score better than -11.5 for both minimized and non-minimized receptors. Thus, the obtained results suggested that pharmacophore features of proposed ligand structures are in general favorable for the placement in the binding site of a kinase. Protein-ligand complexes with the best score were treated by visual inspection and the structure 7 containing benzimidazole k for ATP-site and fragment of 3-(4-methyl-1H-imidazole-1-yl)-5-(trifluoromethyl)aniline f was considered as the most promising substance. This complex is characterized by high docking scores: -12.6 for non-minimized C-ABL (PDB 2HYY) and -12.3 for non-minimized Human ABL (PDB 3CS9). The best binding poses, obtained by AutoDock Vina, were in the agreement with the initial design logic of target structures. Docking results of the structure 7 showed typical for type II inhibitors binding characteristics. Trifluoromethylaniline residues occupied the allosteric pocket, and the position of amide bond was similar to those of known inhibitors. Benazamide linker with rotatable methylene group made it possible for benzimidazole moiety to be placed in ATP-pocket of binding site. Further analysis of interactions showed the presence of hydrogen bonds with amino acid residues Met-318, Thr-315, Asp-381, Glu-286 and Thr-251 (Fig. 4). 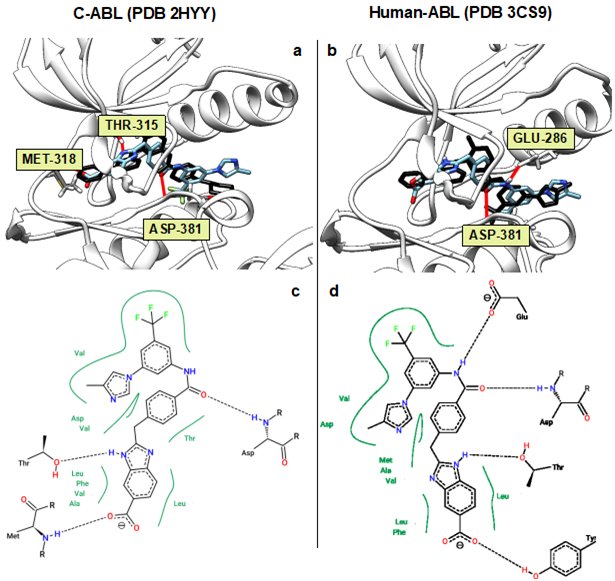 Table 2: Calculated binding affinities and their decompositions (kJ/mol) for complexes of target structures, references and modifications

Figure 5: Calculated binding energies and their decomposition to non-polar and polar components of initial ligands, reference ligands and modifications

Structure 7 was the most promising one after docking step but showed poor total binding affinity but relatively high polar and non-polar components. That’s why we made attempts to increase estimated binding affinity of studied ligands by further structural modifications. Four modifications of structure 7 (M1-M4) and one modification of structure 4 (M5) were proposed and evaluated by the above-described workflow starting from obtaining docking pose followed by molecular dynamics simulation (Fig. 6).

Figure 6: Proposed modifications of structures 4 and 7

As a result of the study, the docking of the combinatorial library of 144 unique structures of type II protein kinase inhibitor analogues in three different conformations was implemented. The proposed approach to the design of the new compounds was aimed to increase the overall spatial extent of the linker as a result of the additional introduction of the methylene group into the benzene ring of the target structure. Under the described conditions of the inhibitory activity evaluation in silico fourteen ligand structures showed a better docking result than -11.5, both for non-minimized receptors and minimized ones. Structure 7, probably, appears to bind in the active kinase center as a type II inhibitor. In this case, the remainder of trifluoromethylaniline is located in the allosteric site of the active center, and the position of the amide group is similar to that of known inhibitors. Benzamide linker with mobile CH2 group makes it possible a favorable location of the benzimidazole fragment in the ATP binding site. This complex is characterized by high docking scores equal to -12.6 (non-minimized receptor) and -12.0 (minimized one) with ABL-kinase (2HYY) along with the presence of hydrogen bonds with amino acid residues Met-318, Thr-315 and Asp-381. It is shown that further modification of the basic structure 7 can increase the calculated binding energy. High value of binding efficiency for many candidates allows us to consider them as promising objects for further study by other computer methods, as well as for chemical synthesis and investigations of their biological properties in order to create new protein kinase inhibitors.

The authors are grateful for the financial support from the National Academy of Sciences of Belarus within the research project number 5.20 of State Program “Chemical Technologies and Materials”, subprogram 5 “Pharmacology and Pharmacy”.