Year 2020 has been highly affected by the COVID-19 outbreak. The urgent need for a potent and effective drug for the treatment of this malignancy put pressure on researchers and scientists worldwide to develop a potential drug or a vaccine to resist SARS-CoV-2 virus. We report in this paper the assessment of the efficiency of thirty alkaloid compounds derived from African medicinal plants against the SARS-CoV-2 main protease through molecular docking and bioinformatics approaches. The results revealed four potential inhibitors (ligands 18, 21, 23 and 24) with 12.26 kcal/mol being the highest binding energy. Additionally, in silico drug-likeness and ADMET (Absorption, Distribution, Metabolism, Excretion and Toxicity) properties for the four ligands showed a good predicted therapeutic profile of druggability, and fully obey the Lipinski's rule of five as well.

Coronaviruses have recently become a serious problem in the world. They belong to the coronavirinae family which contains four genera based on genetic properties: alpha-, beta-, delta- and gamma-coronavirus. Approximately, the genome size of coronavirus compared to other RNA viruses ranges from 26 to 32 kilobases. The Severe Acute Respiratory Syndrome Coronavirus (SARS-CoV) and the Middle East Respiratory Syndrome Coronavirus (MERS-CoV) also belong to the beta-coronavirus genus and are zootopic pathogens that can cause severe respiratory diseases in humans [1,2].

The novel coronavirus pneumonia (coronavirus disease 2019, COVID-19 or SARS-CoV-2) is a highly contagious acute respiratory infectious disease and constitutes a major public health problem. The nucleic acid of the novel coronavirus is a positive-stranded RNA [3]. Its structural proteins include spike protein (S), envelope protein (E), membrane protein (M), and nucleocapsid phosphoprotein; while its transcribed non-structural proteins include: ORF1ab, ORF3a, ORF6, ORF7a, ORF10 and ORF8. The novel coronavirus is highly homologous to the coronavirus in bats [4,5], and has significant homology with the SARS virus [6-8]. It was first detected in December 2019 in Wuhan, Hubei Province (China), and became a global pandemic, killing hundreds of thousands of people [9]. The infected patients by SARS-CoV-2 have a fever and a temperature above 38°C with symptoms such as dry cough, fatigue, dyspnea, difficulty breathing, and various fatal complications including organ failure, septic shock, pulmonary edema, severe pneumonia, Acute Respiratory Distress Syndrome (ARDS) [10].

There are only two ways of transmission of COVID-19 that have been reported, by droplets and contact (direct and indirect) [11].

Currently, there are no specific treatments available for COVID-19 and several explorations relevant to the therapies of COVID-19 are becoming inadequate [12]. Consequently, other than vaccine development, academics and researchers have undertaken several strategies, by using on one hand traditional medicinal plants as possible alleviating drugs [13-14], and one the other hand by exploring in silico studies to pinpoint potential inhibitors from a set of secondary metabolites and other chemical compounds [15-16]. Nevertheless, it is worthy to mention that some studies have encountered the combinations of existing drug candidates (FDA approved drugs) involving anti-HIV drugs such as lopinavir/ritonavir, remdesivir, etc for therapeutic use against COVID-19 [17].

The recognition of protease as an attractive target to inhibit COVID-19 replication has emerged as an interesting pathway to investigate both natural and synthetic drugs to target the viral protease [18,19]. Medicinal plants provide a wide variety of integral and alternative drugs which may assist to solve the many puzzles behind several viral diseases [20]. So, the different parts of the plant (stem, roots, seed, bark, food and flower) are used to treat diseases which vary from frequent to rare infectious and non-infectious ailments [21].

In this study, we evaluated the potential inhibitors of SARS-CoV-2 main protease from thirty alkaloid compounds derived from African medicinal plants as one of rich in floral biodiversity and its plant materials are endowed with natural products (NPs) with intriguing chemical structures and promising biological activities which can be used in searching the solution against COVID-19 [22]. According to the World Health Organization (WHO), more than 80% of the population in Africa use traditional medicine to solve their primary health problem [9].  A survey of literature allowed us to identify 30 alkaloids compounds derived from plants used in African Traditional Medicine (ATM), harvested from the following countries: Republic of the Congo, Nigeria, Tanzania, South Africa, Ivory Coast West African countries, Kenya and East African countries (Table 1) [22]. These 30 phytochemicals have been put in interaction with the SARS-CoV-2 main protease to assess their efficiency against the virus protease using molecular docking tool, and thus pinpoint the potential inhibitors.

Table 1. Summary of selected alkaloids derived from the African plant: indoles and naphthoisoquinolines

The crystal structure of COVID-19 Mpro (PDB ID: 6LU7) (Figure 1) was retrieved from the Protein Data Bank and imported into Auto dock 4.2 where the inhibitor and water molecules were removed before the docking and hydrogen atoms were added to the protein to correct the ionization and tautomeric states of the amino acid residues. Further, Kollman charges were added and the protein was saved in .pdbqt format [35]. 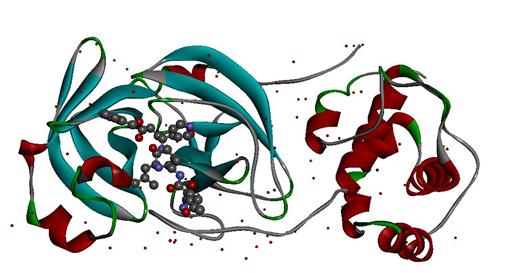 Figure 1. The crystal structure of COVID-19 main protease in complex with the crystallized inhibitor N3

Since the binding affinity of ligand-protein interactions merely gives an idea of the thermodynamic stability of the formed complex, it is important to analyze the pharmacodynamics of the potential inhibitors. To do so, predictions of ADMET (Adsorption, Distribution, Metabolism, Excretion and Toxicity) of all investigated compounds were assessed through the SwissADME database available at https://www.swissadme.ch, and preADMET server (Korea) [36, 37]. 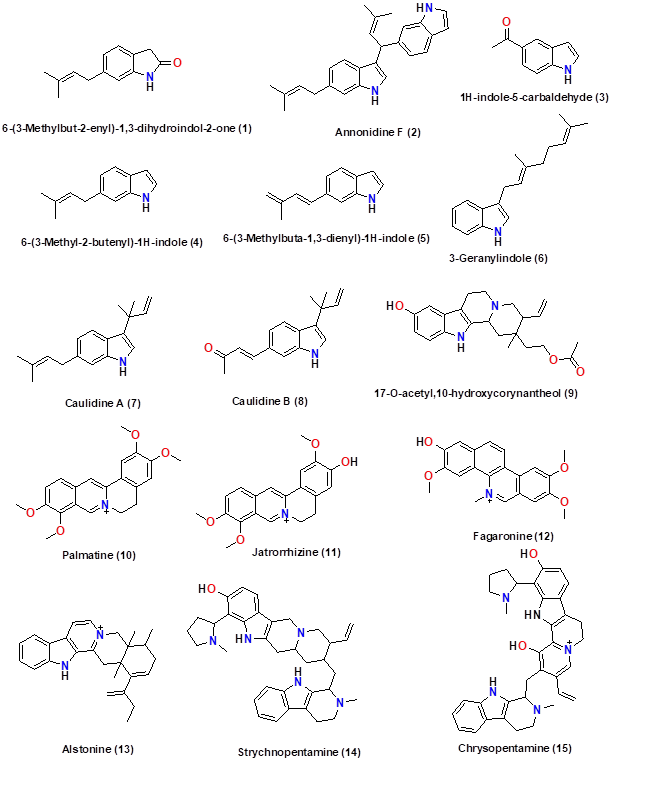 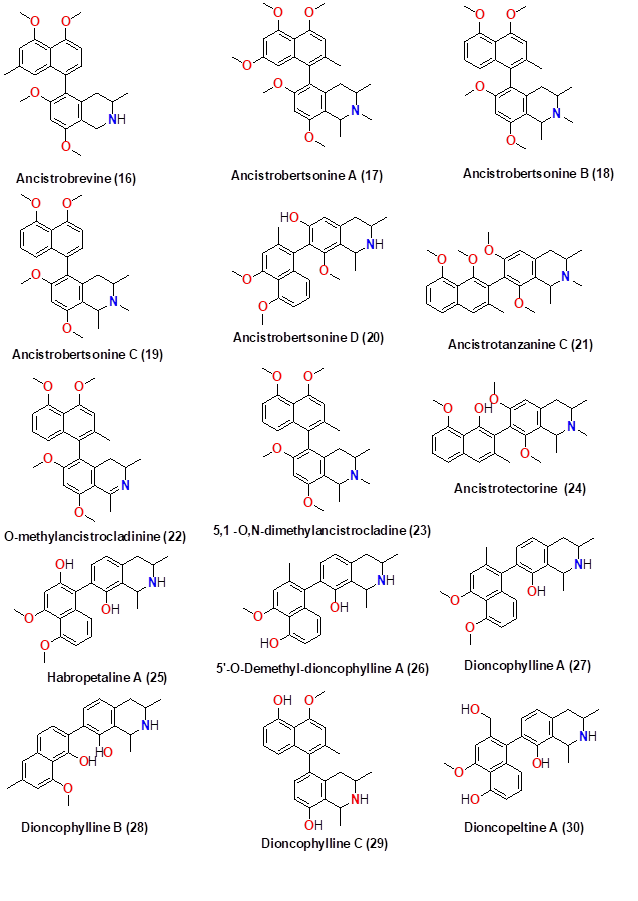 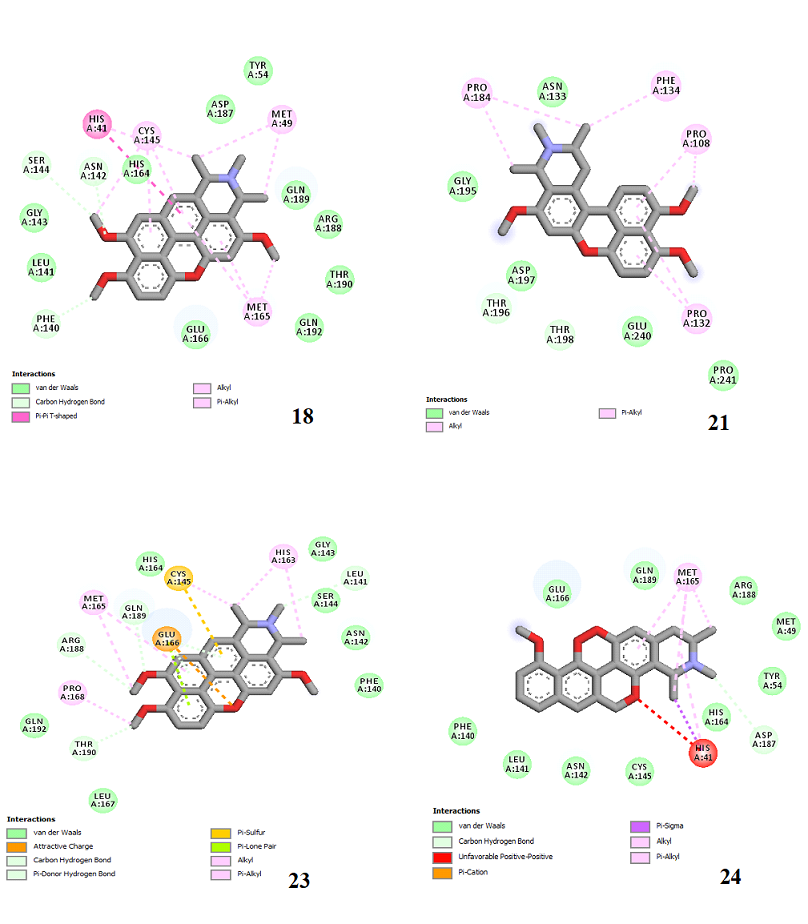 Figure 4. Molecular docking of the four best ligands with Mpro, as potential therapeutic candidates against COVID-19. Interactions of various amino acids of Mpro with ligand 18, 21, 23 and 24 are presented with the best docking pose.

Molecular docking is used to estimate the scoring function and evaluate protein-ligand interactions to predict the binding affinity and activity of the ligand molecule [38]. The Auto dock tool was used to generate the bioactive binding poses of the ligands dataset in the active site of SARS-CoV-2 Mpro. The protein coordinates from the bound ligand of 6LU7 were used to define the binding site. So, the scoring function was calculated using the standard protocol of the Lamarckian genetic algorithm [39]. The grid map for docking calculations was centered on the target protein. Accelrys Discovery Studio 2019 software [40] was used to model non-bonded polar and hydrophobic contacts in the inhibitor site of 6LU7. The docking results were visualized using Pymol 2.3.4.0 (see Figures S1 and S2 in supplementary data) and Discovery Studio Visualizer 4.0.

The docking calculations of thirty alkaloid compounds with SARS-CoV-2 protease were carried out by using the Autodock virtual screening tool. The results of docking calculations in terms of binding affinity (kcal/mol) and interactions of different orientations of alkaloid compounds in the active site of the SARS-CoV-2 main protease are shown in Table 2. Also gathered in this table are the drug-likeness properties of the ligands.

To the best of our knowledge, this is the first computational study that reports binding energies higher than 10 kcal/mol of ligands to bind to one of the pharmacological targets of the SARS-CoV-2. In fact, Olubiyi and coworkers performed high throughput virtual screening of over one million compounds, but only six with the strongest computed affinities ranging from 8.2 to 8.5 kcal/mol were identified [41].

The interactions analysis of the 12 best-docked ligands can be summarized as follows:

3.2. Prediction of pharmacokinetics and toxicity

In the pipeline of computer-aided drug design, after the identification of hit molecules, the next step to deal with is the pre-clinical optimization that concerns the physicochemical properties, mainly the ADME/T prediction. The physicochemical property is an important parameter of a molecule which can be used as a drug and can be predicted by using Lipinski's rule of five (RO5) that is molecular mass < 500; Hydrogen-bond donors (HBD) < 5; Hydrogen-bond acceptors (HBA) < 10; and Log P < 5 [45]. Toxicity and pharmacokinetic studies such as absorption, distribution, metabolism and excretion of alkaloid compounds were assessed by using the web-based applications PreADMET (https://preadmet.bmdrc.kr/) and SwissADME database (https://www.swissadme.ch).

The drug-likeness properties accommodated in Lipinski’s rule of five of all ligands were calculated and are listed in Table 2. The results reveal that only ligand 14 does not fully obey Lipinski's rule of five criteria, with only 1 violation (MW 549.75 Da > 500 Da). Consequently, the best 12 docked ligands among the 30 investigated alkaloids may emerge as potential major inhibitors of COVID-19 protease.

Turning next to the pharmacokinetics and toxicity properties of eleven potential inhibitors ligands, the results displayed in Table 3 reveal that there are potential drug candidates (Table 3) among the 12 best-docked compounds. First of all, the hit molecule to be tested in the clinical phase must be non-carcinogenic. The rodent carcinogenicity in rat predicted by the preADMET server reveals that only ligand 22 is carcinogenic.  The Ames test that assesses mutagenicity of a compound reveals that seven ligands are no mutagen, in addition to being no-carcinogenic: ligands 18, 21, 23, 24, 25, 26 and 28. Interestingly, the ligand 18 with the highest binding energy is predicted to be no-carcinogenic and no mutagen. The pharmacokinetic evaluation related to inhibition of Cytochrome P450 and substrate of P-glycoprotein shows that ligands 18, 21, 23 and 24 are found to be non-inhibitors of all CYPs. Ligands 10, 11, 12, 22, 25, 26 and 28 inhibit one or two of the cytochromes responsible for drug metabolism (CYP2D6 and CYP3A4), and cannot be presented as potent inhibitors drugs [46]. In the case of the hERG inhibition, all the ligands presented a medium risk. Thus, the toxicity prediction shows that the ligands 18, 21, 23 and 24 are safe and represent potential therapeutic candidates against COVID-19.

Table 3. Pharmacokinetics and toxicity properties of the three potential inhibitors.

The COVID-19 pandemic continues to spread in the world and most countries are currently facing the second phase of the virus propagation. Several strategies are used by researchers to help to find a solution to this public health issue. The present study used a computational drug design approach by molecular docking to identify potential inhibitors of SARS-CoV-2 main protease from a set of thirty alkaloid compounds from African medicinal plants as potential inhibitors. Scrutiny of the binding affinities leads to 22 hits with the highest binding energies, up to 12.26 kcal/mol, but pharmacokinetic investigations as an important pre-clinical phase reveal only four compounds as potential therapeutic agents to be used in the treatment of COVID-19: ligands 18, 21, 23 and 24. It should be noted that these four compounds have been isolated from Acistrocladaceae species, and their antimalarial properties have been confirmed by Bringmann and workers. Some traditional African healers use Acistrocladaceae species to treat measles and fever but so far no study has been carried out to support this use. To the best of our knowledge, this computational study is the first to report binding energies higher than 10 kcal/mol of ligands to bind to one of the pharmacological targets of the SARS-CoV-2. To support these encouraging results, we recommend further in vivo trials for the experimental validation of our findings.

Our sincere thanks go to Professor Kalulu M. Taba for agreeing to supervise this work.

The authors declare that they have no known competing financial interests or personal relationships that could have appeared to influence the work reported in this paper.

All authors read and approved the final manuscript.

This study did not receive any particular funding.