Hai-Liang Zhu, Effects of landscape on the distributions of nutrients and polycyclic aromatic hydrocarbons in an urban river system(2019)SDRP Journal of Earth Sciences & Environmental Studies 4(2)

Urban river systems have large potentials for determining the fate, distribution, and transport of water contaminants. This study was conducted to investigate the distribution and identify the sources of 16 Environmental Protection Agency priority polycyclic aromatic hydrocarbons with respect to four different urban river landscapes (river channels managed with hard revetment, unmanaged, with wetland construction, and in city park). The significant differences of water nutrient physicochemical indices in the four landscapes were also compared with the general linear model, and their relationship with polycyclic aromatic hydrocarbons were analyzed using principal component analysis. The results showed that the city parks and wetlands may improve the water quality and accelerate degradation of contaminants. Furthermore, the river channels in the park and wetland had lowered proportions of low molecular weight (2, 3-rings) polycyclic aromatic hydrocarbons in the river sediment compared to urban river channels with other two landscapes.

Many countries and regions are experiencing rapid urbanization process in the past several decades till now. Urban river systems have been facing the most severe challenges on meeting daily life demand for the public as well as industry and agricultural production. Purifying urban wastewaters [1, 2] and preparing for extreme weather conditions such as drought and flood are becoming more and more prevalent [3, 4]. The pace of urbanization in China is becoming slower now because of the emergence of the aging society. The experiences and lessons from China’s urban river management during the urbanization process is much useful to other countries as they are also going through this process of urbanization development of a high intense. Compared with centralized sewage treatment plants, on-site treatment becomes increasingly popular for urban river systems, such as purifying wastewater in urban river channels with different methods such as wetland construction [5], phytoremediation [6], microbial degradation [7], and absorption reactions with various materials [8]. Among these methods, wetland construction is of the greatest attraction because wetlands can be “whatever you want it to be”. Wetlands can create and supply habitats for plants [9], animals [10] and microorganisms [11] and thus they are integrations of almost all the purifying methods together and function together to increase ecological biodiversity [12] and improve water quality of rivers and connected lakes. Many studies demonstrated that wetlands are effective in enriching, degrading and removing chemical nutrient [13] and persistent organic pollutants (POPs) [14]. Due to its importance for urban river system, wetlands construction is exerting increasing interests for environmental engineers and coexists with other common riverine landscapes such as urban park focusing on both ecological functions and ornamental values.

Polycyclic aromatic hydrocarbons (PAHs) is a kind of harmful and even carcinogenic POPs produced by pyrogenic and petrogenic origins [15, 16]. PAHs can be accumulated and overdosed in urban river sediments during urbanization and industrialization in developing countries such as China, Zambia, and India [17-20]. Their sources, partitioning, and ecological risks have been well documented [21]. To our best knowledge, comparisons of PAHs distributions among different landscapes of urban river systems have not been addressed in previous studies. The hypothesis of this paper is that urban river channels within landscapes such as wetland and city park show better water nutrient quality and lower sedimentary PAHs distribution. Therefore, the objectives of this study were to investigate the distribution of relative water nutrients and PAHs in sediments of the Jialu River in the section of Zhengzhou City and compare the differences of their distributions among the following four urban river landscapes including (1) urban river channel with wetland construction; (2) urban river channel in city park; (3) normal managed urban river channel (covered by hard revetment, cleaned by municipal officials regularly); and (4) unmanaged urban river channel (without any clearance or management) and infer the sources of PAHs and relationships between the total of 16 EPA priority PAHs (∑16 PAHs) and water physicochemical indices [22].

The Jialu River is a secondary tributary of Huaihe watershed. It is about 256 km long with a total of 5,896 km2 of basin area [23]. It flows across Zhengzhou City, the biggest modern communication hub with almost 10 million citizens by the end of the year 2015 in middle China and the hometown of Chinese people’s ancestor "Emperor Yellow". The section of the Jialu River in Zhengzhou City was called “the Soy-sauce river” by local people because it was polluted heavily, which shows the deteriorating paradox between economic development and environmental protection during rapid urbanization development. Many projects were conducted there to protect urban river resources. As shown in Figure 1, wetlands were constructed on the north of Jianshe West Road in Xiliu lake according to the natural topographical conditions. A city park had been built and opened on the north of Huagong Road, which occupied 120,000 km2. There also lies an unmanaged urban river channel of Jialu River with a length of 860 m on the north of Zhongyuan West Road and normal urban river channel on the northeast of Huagong Road surrounding the city. 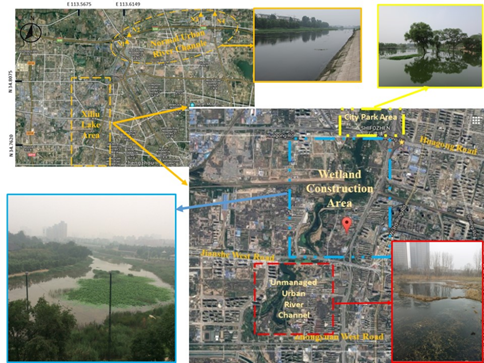 All samples were sampled in dry cold winter season on January 14th and 15th, 2014 because higher PAHs concentrations were found in dry cold season in this watershed area [24]. Water sampling was conducted according to the standard method (Angradi 2006). Briefly, for sampling sites at the urban river channel, a CS-100 type of polymethyl methacrylate water sampler was used for sampling three water sample locations in the thalweg, and half the distance from the thalweg sampling location to each bank-line along the cross-channel transect. For sites around Xiliu Lake, all waters were sampled 10 m away from the bank-line. The sampler was merged under water and water was collected at the depth of 20 cm. Then 100 mL plastic centrifuge tubes were used to collect water from the middle mixture of the three samples with addition of proper amount of concentrated hydrochloric acid. Water samples were stored on ice in cooler and then sent back to the lab in Zhengzhou University for further physicochemical analyses immediately on the same sampling day.

As for sediment samples in Xiliu Lake, sampling sites were chosen 10 m distance away from bank randomly. Triple samples of each site were sampled. As for sediment samples in the river, middle parts of triplicate samples from both sides and middle of the river at each site were collected and mixed. All samples were stored in a clean glassware at -4 ℃ in an ice locker and then finally stored at -20 ℃ in cooler for further analyses [21].

Water samples were adjusted to pH 7.0 in lab after they were acidified in sampling process, and the concentrations of ammonia (NH3-N), nitrate (NO3-N), chemical oxygen demand (COD), and total nitrogen (TN) and total phosphorus (TP) were analyzed with HACH DR 2800 spectrophotometer (HACH, Loveland, CO, USA) [25]. Average results of three replicates were used for further analyses.

Sediments were sent to Jiangsu Guochuang Enviro-protection Technology Co., Ltd to analyze 16 USEPA prior PAHs. Analytical methods [23] was applied to detect the amount of PAHs with an revised ultrasonic extraction method [26] and finally used for gas chromatography–mass spectrometry (GC–MS) analysis.

General linear model (GLM) was used to analyze the significant differences of these samples in different landscapes. PCA analysis was conducted to explore the relationship between ∑16 PAHs and water physicochemical indices. Both GLM and PCA were conducted using SPSS 22.0.

Data is expressed as mean ± SD

In Table 2, PAHs concentrations in this study are compared with other two Chinese urban rivers and two foreign urban rivers. The upper limit of Jialu River was 1514.3 ng/g d.w. which was lower than any other urban rivers in this table. While its lower limit was 827.5 ng/g d.w., which was the highest lower limit among its counterparts. The mean concentration of total PAHs in Jialu River was 1140.8 ng/g d.w., which was still the lowest among these rivers. The data showed that the total pollution extent of PAHs was relatively lower than the other urban rivers listed. But it is worth mentioning that there is an extremely large value (∑16PAHs = 207991 ng/g d.w.) from the site U4 of this present study, showing that possible exacerbated pollution at some part of the Jialu River, especially the unmanaged urban river channel, happened severely. 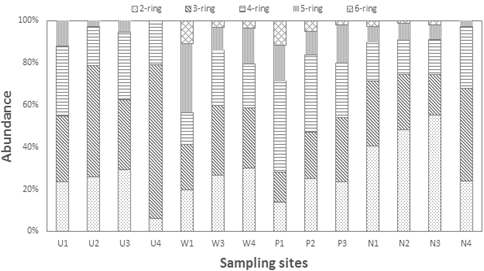 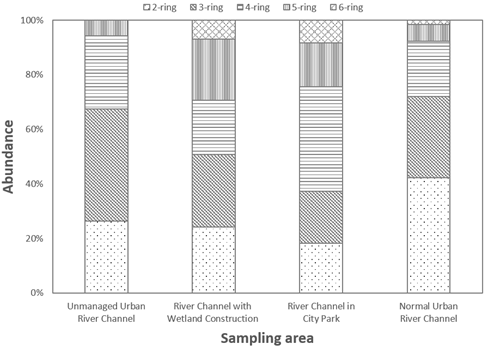 Figure 3. Distribution of average concentrations of 2-, 3-, 4-, 5- and 6-ring PAHs in the surface sediments from urban river channels with 4 different landscapes of the Jialu River

3.3. The Sources and Correlation of PAHs and Water Nutrients

The sources of PAHs that accumulated in urban rivers and surface sediments can be inferred by isomeric ratios of PAHs [38]. Combined with the two isomeric ratio plots in Figure 4(a) and Figure 4(b), the conclusion can be drawn that most the sampling sites were polluted largely by coal combustion except few sites (N1, N2, and N4) due to petro-chemical fuel combustion, which was in accordance of the existence of the highest ratio of LMW PAHs distributions in normal managed urban river channel described above. PCA analysis was performed to elucidate characteristics of the mount of total 16 PAHs and several physicochemical indices of water bodies which are shown in Figure 5. Component 1, representing relation between total concentrations of sediment ∑16 PAHs and water nutrients (NH3-N, COD, TN, and TP), can explain 75.4% of the total variance with eigenvalue equals 4.522. Component 2 shows difference between two nitrogen species (NO3-N and NH3-N), explaining 14.4% of total variance with an eigenvalue equals 0.865 smaller than 1, which means it is of less importance than component 1. Sediment ∑16 PAHs was closely related with water NH3-N, COD, TN, and TP and the furthest to NO3-N which is similar to the relation between sediment ∑16 PAHs and sediment nutrients in one of our previous study [21], which indicates the existence of the dynamic equilibrium of sediment PAHs-sediment nutrients-water nutrients in river water-soil system. It also proves that PAHs and other nutrient contaminants were probably discharged into the Jialu River together and transported in a similar process [23]. 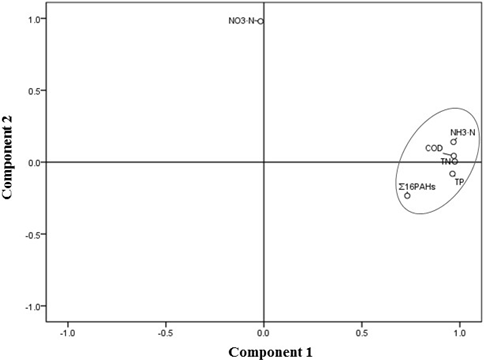 COD and NH3-N indices reached Criterion I of Chinese quality standards for surface water, both in river channels with wetland construction and in city park. The concentrations of ∑16 PAHs of Jialu River of Zhengzhou City in this present study ranged from 827.5 ng/g d.w. – 1514.3 ng/g d.w., with an average concentration of 1140.8 ng/g d.w., which was lower than the most of parallel studies on urban rivers. Analysis of isomeric ratios and LMW PAHs distributions in most sampling sites indicate that coal combustion was probably the main source of PAHs pollutions in Zhengzhou City. Specifically, for this study, the ratio of LMW PAHs stayed the lowest in urban river channel in city park, followed by urban river channel with wetland construction, which may indicate better dissipation effects of PAHs in these two urban river landscapes. PCA analysis shows that sediment ∑16 PAHs correlated closely with water NH3-N, COD, TN, and TP and far from water NO3-N. At last but not least, this present study shows that wetland and city park exert better environmental and social benefits for the management of urban river systems.

This work was supported by Major Projects on Control and Rectification of Water Body Pollution (2017ZX07602-002). The contribution to wetland construction by Dr. Shuqing An from School of Life Sciences, Nanjing University is very appreciated.

Kun Dong: substantial contributions to conception and design, acquisition of data, and drafting the manuscript.

Siyuan Song: substantial contributions to acquisition of data and the involvement in drafting the manuscript.

Xiaocun Sun: substantial contributions to the analysis and interpretation of data

Hai-Liang Zhu: substantial contributions to conception and design, and revision of the manuscript.