The Metalloproteinase (Mep) gene of Puccinia helianthi was expressed in Escherichia coli in order to produce the mature protein. The hydrolytic activity of this enzyme was tested, and the subcellular localization of Mep was detected. The mature peptide cDNA of P. helianthi Mep, when introduced into E. coli, expressed a protein with a size, amino acids sequence identical to the putative fungal enzyme. The recombinant expression products of Mep gene could hydrolyze azocasein and the hydrolytic activity was suppressed by metal ion chelating agents such as 1,10-phenanthroline and ethylene diamine tetraacetic acid (EDTA). Confocal laser scanning microscopy of the leaves from a 2-day-old Nicotiana benthamiana seedlings expressed Mep-GFP fusion that showed green fluorescent protein (GFP) signal accumulated in the cell wall, or the plasma membrane of epithelial cells. Mep may serve as a pathogenicity factor contributing to P. helianthi penetration and infection.

Exogenous absorption of macromolecular nutrients is a common strategy of fungal growth, which relies on the secretion of hydrolases including cutinases, cellulases, pectinases, and proteases. One of the most important are hydrolases possessing proteolytic activity.

Sunflower rust, which is one of the major diseases of sunflower globally, spreads in the sunflower planting area triggering a heavy loss. Puccina helianthi, the causal agent of sunflower rust, is a macrocyclic and autoecious pathogen. To develop resistant plants, a better understanding of rust virulence factors is needed. Recently we have identified a secreted protein metalloproteinase (Mep, GenBank ID:  KU994904) in P. helianthi which is strongly up regulated during the initial stages of infection [1]. Bioinformatics analysis showed that the Mep had a signal sequence and 460 additional amino acids preceding the sequence for the mature protein of 445 amino acids. P. helianthi Mep contains conserved zinc-binding and active site motifs characteristics of Mep which might well be a new fungalysin-like peptidase in the M36 family (Merops peptidase database, http://merops.sanger.ac.uk/) [2]. The previous studies have shown that M36 metallopeptidase comes from Aspergillus fumigatus [3, 4], Coprinopsis cinerea [5], Perenniporia fraxinea [6], Trichophyton sp. [7], Microsporum sp. [7], Nomuraea atypicola [8], Coccidioides posadasii [9], Pyrenophora tritici-repentis (NCBI protein XP 001940970.1), and Arthroderma gypseum (NCBI protein XP 003173813.1). M36 metallopepitdase from A. fumigatus involved in the degradation of proteinaceous structural barriers during invasion of the host lung [10]. M36 metallopepitdase from T. mentagrophytes involved in the degradation of keratinase during invasion of the host skin [11].

In the present study, we described the expression of the mature proteinase of P. helianthi in Escherichia coli. Moreover, the hydrolytic activity of this enzyme against azocasein was tested, and the subcellular localization of Mep was detected.

2.1. Expression of the fungal Mep in coli

To express the mature Mep in E. coli, MaxCodonTM Optimization Program (V13) was used to optimize the amino acid sequence of mature Mep. Gene Mep was introduced to NdeI site and a HindIII site at the 5’ and 3’ ends, respectively, and a Met start codon was created by the NdeI site at the N terminus. Total genes were synthesized and inserted into expression vector Pet30a (His-tag at the N terminus). The clones with correct insertion were identified by enzyme digestion and sequencing. Pet30a-Mep was transformed into expression host strain E. coli BL21 (DE3). Positive colonies were identified by PCR and double digestion with NdeI and HindIII. The primers were designed with Primer Premier 5.0 program and synthesized by Invitrogen.

PCR was carried out in 25 μL reaction system. The amplification protocol consisted of the denaturation at 95 ℃ for 5 min followed by 35 cycles with 30 s at 94 ℃, 30 s at 65.3 ℃, and 1 min at 72 ℃. A final elongation was done at 72 ℃ for 10 min. The cDNA obtained after the total RNA amplification was separated on a 1.5% agarose gel. A single colony of transformant clones containing Pet30a-Mep was then inoculated in 4 mL Luria-Bertani (LB) broth containing 50 µg mL-1 Kanamycin in a shaking incubator. When cells reached the log growth phase (OD600 0.5–0.8), isopropyl-β-D-thiogalactopyranoside (IPTG) was added to a final concentration of 1 mM to induce production of T7 RNA polymerase and thus the synthesis of the Mep, and cells were harvested after 16 h of growth at 15 ℃ or 37 ℃. The culture was then used for Mep expression analysis by Sodium Dodecyl Sulphate Poly Acrylamide Gel Electrophoresis (SDS-PAGE).

The transformant was cultured in 3 L LB medium. When cells reached the log growth phase (OD600 0.8), IPTG was added to induce Mep expression and the final concentration of IPTG was 1mM. The cells were harvested after 16 h of growth at 15 ℃.

The cells were harvested by centrifugation (6000 rpm for 5 min at 4 ℃). The bacterial pellets were resuspended in lysis buffer [50 mM Tris-HCl (pH 8.0), 300 mM NaCl, 1 mM phenylmethylsulfonyl fluoride (PMSF), 1 mM dithiothreitol (DTT), 20 mM imidazole containing 1% Triton X-100]. The bacterial cell pellets were lysed on ice with the aid of ultrasonic cell disruptor. At the same time, Ni-IDA affinity column was equilibrated with the buffer [50 mM Tris-HCl (pH 8.0), 300 mM NaCl, 20 mM imidazole]. The column was then eluted by the equilibrium buffer with different concentrations of imidazole (50 and 500 mM) to obtain the target protein. Elution components were collected for SDS-PAGE electrophoresis analysis.

Protein complexes were purified by SEC at 4 ℃ on Superdex-200 pre-grade column 16/100 (Pharmacia, GE Healthcare Bio-sciences, Pittsburgh, PA, USA), in 50 mM Tris-HCl buffer, pH 8, containing 150 mM NaCl, 8 M Urea (running buffer) at a flow rate of 1.0 mL min-1, and the elution profiles were continuously monitored with an online detector at a wave length of 280 and 260 nm. The target protein fractions were collected and protein purity was evaluated by SDS-PAGE.

The dialyzates were separately loaded in tubes, freeze-dried, and then stored at –80 ℃; resulting protein powders were designated as the Mep fraction.

The separated proteins were electroblotted onto a polyvinylidene difluoride (PVDF) membrane, which was blocked with 5% non-fat milk in PBS buffer with 0.05% Tween 20 for 1 hour. The membrane was incubated overnight at 4℃ with Anti-His tag mouse monoclonal antibody (1:5000 dilution in blocking buffer), then washed, and incubated with HRP-conjugated goat anti-mouse antibody (1:5000). The proteins were detected using the chemiluminescence (CL) of luminol–H2O2 system.

The enzyme activity was determined by the method of Ueda et al. 2013 with minor modification. The Mep activity was detected using azocasein. The reaction system is 1 mL. The mixture of 2% (w/v) azocasein solution, 350 μL of 0.1 M Tris-HCl buffer (pH 8.5) and 100 μL enzyme solution were incubated at 37 ℃ for 10 min. 500 μL of 10% trichloroacetic acid was then added to stop the reaction. The solution was left to stand at room temperature for 1 hour, then centrifuged with 12000×g for 10 min. One unit (U) of protease activity was defined as the amount of enzyme that will increase in absorbance of 0.001 at 280 nm min–1.

The enzyme was incubated with an inhibitor (1,10-phenanthroline or EDTA) in 0.1 M Tris-HCl buffer (pH 8.5) at 25 ℃ for 1 hour. The inhibitors and their concentrations in the reaction system were as follows: EDTA (1 mM, 5 mM, 40 mM) and 1,10-phenanthroline (1 mM, 5 mM, 40 mM). The detection of the residual activity of Mep after interaction with the inhibitors was based on the method of section above. The activity observed in the absence of inhibitor (control) was set to 100% [8].

Solutions of Agribacterium tumefaciens-carrying pCambia1302-eGFP-Mep were infiltrated into leaf pavement cells of 4-week-old N. benthamiana plants. At two days post-infiltration (dpi), water-mounted slides of leaf tissue from agro-infected leaves were visualized by confocal microscopy. A. tumefaciens-carrying pCambia1302-eGFP was infiltrated into leaf cells as a control. Leaves were observed under a Nikon A1 confocal laser scanning microscopy.

3.1. Construction and identification of expression vector

The newly formed vector was named pET30a-Mep and identified by colony PCR (Fig. 1) and double-enzyme digestion with NdeI and HindIII (Fig. 2). 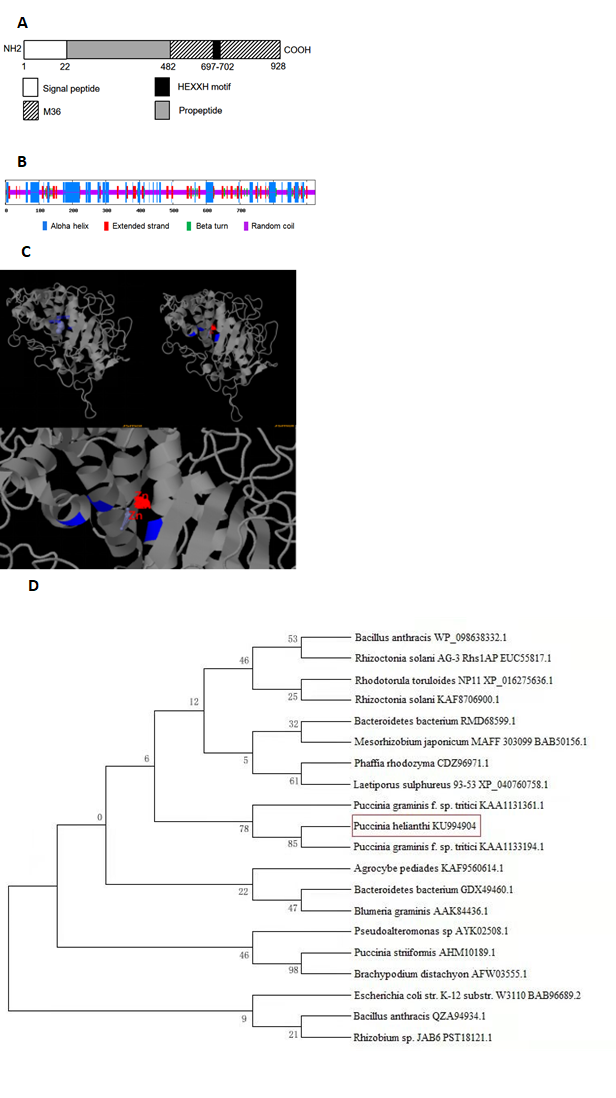 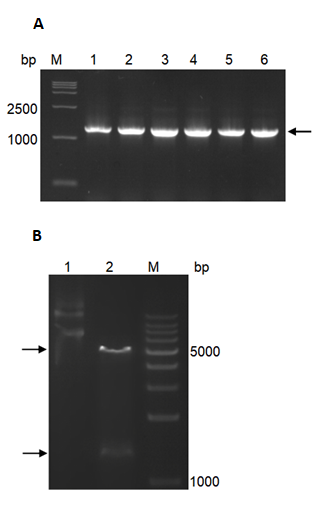 3.2. Expression and identification of Mep protein

Mep was expressed successfully in E. coli strain BL21 (DE3) after induction of expression by IPTG for 16 h. The Mep fusion protein was obtained as expected (Fig. 3).

The expressed fusion protein was harvested by ultrasonically lysing the E. coli. After centrifugation, bacterial supersonic lysates and culture supernatants were tested. Insoluble material from the lysates contained target protein (about 50 kDa). Supernatant obtained from the lysed E. coli cell contained protein with similar molecular weight to the target protein and could not be adsorbed by Ni-IDA column and eluted after incubation with Ni-IDA. No target protein was found in eluting fractions after elution with 50 or 500 mM imidazole (Fig. 4). Expressed fusion proteins existed in the form of inclusion body in E. coli by SDS-PAGE. 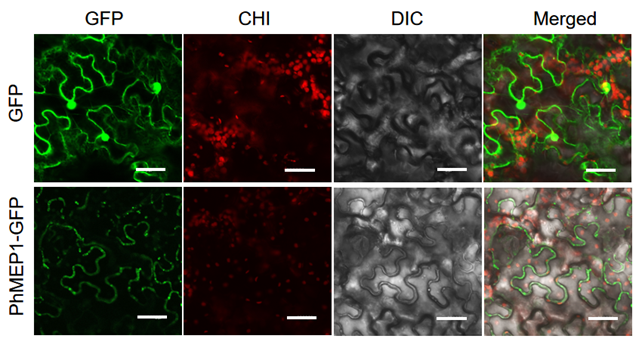 The results of azocasein hydrolysis showed that Mep could hydrolyze azocasein substrate. The specific activity was 1560 U mg–1.

3.8. The subcellular localization of Mep

The green fluorescent protein (GFP) signal was detected in the cell wall, or the plasma membrane but not in chloroplast, cell nucleus and cytoplasm (Fig. 8 ).

In this research, we performed prokaryotic expression and described the characteristics of a fungalysin-like metalloprotease from P. helianthi. As far as we are concerned, this is the first time a fungalysin-like metalloprotease has been identified from P. helianthi. Generally speaking, little is known about the function, specificity, and modulatory mechanism of the extracellular proteases of fungus, so it is difficult to speculate the roles of the individual M36 fungal proteases in P. helianthi. However, the extensive understanding of this gene family provides a good model system for learning the roles of the similar individual peptidases in the extracellular condition.

Extracellular proteases play a vital role as hydrolases that maintain and adjust the nutritional requirements of microorganisms and are widely accepted in the food and pharmaceutical industries [12]. The pathogen's extracellular proteases are essential for regular growth and in favor of multiple ways of bacterial infection [13]. Among the secreted proteases, elastase and alkaline protease of Pseudomonas aeruginosa [13, 14] are the two most recognized and understood metalloproteases. Structurally, Mep active centers contain one or two metal ions and most of zinc-containing proteins. In fact, many zinc-containing bacterial proteases and fungal proteases are found throughout the world within microorganisms [15-18], such as the AprX extracellular metalloproteinases of many fluorescent pseudomonads [19-21], members of the Bacillus neutral protease family [13, 17], the SmP metalloprotease (serralysin) of Serratia marcescens [15, 22], the RpA metalloprotease (serralysin) of Ralstonia pickettii [15] and alkaline protease of fungi [10, 23]. Extracellular Meps are known to be important virulence factors related to bacterial and fungal pathogenicity [18, 24]. Because of the great medical, physiological and commercial potential of these enzymes in practical applications, it is essential to isolate and screen various microbial strains.

Along with the results of the bioinformatic, the activity of P. helianthi Mep that was suppressed by 1,10-phenanthroline and EDTA strongly suggested that the product of the cloned gene was a metalloprotease. The localization of Mep in planta can help us investigate if Mep associates with host molecules for interaction.

Taken together, our results suggest that Mep likely manipulates plants molecules by targeting cell wall or plasma membrane of epithelial cells, and degrading cellular constituent via protein-binding, which is possibly a pathogenicity factor contributing to penetration and infection by rust pathogen.

helianthi is an obligate pathogen of sunflower. The enzyme Mep secreted by this pathogen would assist the invading fungus to penetrate through host barriers and thus adding pathogen virulence. Since the use of extracellular enzymes to degrade the structural barriers in the host appears to be a commonly used strategy of fungal pathogens [25, 26], therapeutic approaches targeting against the major virulence factors would be a highly desirable alternative to prevent and treat sunflower rust.

We reported the characterization of an extracellular Mep gene from P. helianthi, which is a causal agent of sunflower rust. Its molecular mass was about 50 kDa. The Mep activity could be suppressed by 1,10-phenanthroline and EDTA. It could interact with the cell wall, or the plasma membrane of host plant. It is possibly a pathogenicity factor contributing to penetration and infection by rust pathogen.