This research was conducted to focus on geohazards usually occurred in underground mining environment especially in longwall coal mining. Typical geohazards which encounter during mining and need to be identified ahead of time include rockburst, coalburst and coal/gas outburst – all of which may have a crucial impact on mining operations and personnel safety. The risk of such geohazards due to rock failure is significant at the area around the active faces and adjacent tunnels. For this purpose, the seismic events result from rock failures surrounding the mine structures were monitored, recorded and analyzed to identify and delineate such geohazards. In order to assess the risk of seismic geohazards in a burst-prone coal mine, the moment tensor inversion technique was employed. The results show that mining-induced seismic events can provide useful information with regard to imminent geohazards ahead of time. The proposed approach based on the moment tensor inversion is a reliable technique to estimate seismic moment tensor, and consequently to control or mange such geohazards in advance of disaster.

Underground mines are subjected to a complex and variable stress field and deformation process under deteriorating strata strength conditions. Therefore, in order to assess the state of stability and also evaluate performance of the support system, prediction of roof strata displacements and deformation ahead of coalface is necessary [1].

When ground is not successfully controlled, rock strata are overloaded and suffered extra induced stresses. The overstressed area in front of the longwall face which generates seismic events may result in seismic geohazards. A geohazard is any geological or geotechnical event that poses an immediate or potential risk which may lead to damage or uncontrolled risk.

This research is focused mainly on the seismic geohazards which are usually encountered in underground coal mining. This type of geohazards is referred to mining-induced seismicity or mining-related geohazard that is directly related to the mining activities. By happening a seismic geohazard, some permanent ground deformations brought about which adversely affects mining operations and personnel safety. Identifying the zones which are prone to generate violent seismic events is a key measure to indicate potential geohazards ahead of time [2].

Presenting a quantitative assessment or an effective treatment for the mining-related geohazards is a demanding and challenging problems. For the time being, there exists no acceptable standard worldwide that covers the seismic design of mining cavities. However, microseismic monitoring has been used in the recent decades in the fields of underground mining, especially in underground coal mines to improve safety and productivity.

Routine seismic monitoring in mines enables the quantification of exposure to seismicity and provides a logistical tool to guide the effort into prevention, control and alert of potential rock mass instabilities that could result in damage, injury or loss of life [3]. In fact, seismic geohazards in mining are strong ground motions resulted from stress concentrations in the rocks surrounding a mining structure. This research is conducted in order to assess seismic geohazards in the longwall coalfaces by investigating the monitored seismic events as a nondestructive examination.

A seismic event is a sudden episode of radiation of seismic energy in ground waves induced by discontinuity slip or rock material fracture [4]. Mining operations generally alter the balance of forces in the rock, causing rock failures that produce seismic waves and in some cases reactivate existing faults causing minor earthquakes. Although the released energy from mining-induced seismicity is small as compared to that of natural earthquakes, these types of seismic events frequently occur due to mining activities.

In order to reduce the imminent risks in the presence of geohazards at the active coalfaces, the monitored seismic events resulted from stress concentrations are analyzed. The proposed approach which is based on the seismic data that propagate during crack initiation and propagation, can mitigate as much as possible the instability risks associated to geohazards.

The more common geohazards in longwall coal mining which are focused in this research include rockburst, coalburst and coal/gas outburst.

Rockburst is a common type of geohazards resulted in dynamic instability of the underground structures in longwall mining, which directly affects the safety of miners, equipment and mining operations. Rockburst is a spontaneous violent fracture of rock that basically depends on the size and depth of the excavation. Induced seismicity and the presence of faults, dykes and joints can trigger rockbursts. In accordance with the triggering mechanism, the rockburst phenomenon is either classified to strain burst or fault-slip burst [5]. A strain burst is directly related to the stress concentration in the surrounding rock mass. On the other hand, fault-slip bursts result due to stress changes in the vicinity of the geological discontinuities.

Coalbursts are often triggered by the mining process and usually occur close to an active longwall face or pillars but can also be triggered by blasting or large scale mining-induced seismic events [6]. When a seismic wave passes through strong stiff strata into a soft coal seam, the soft stratum cannot efficiently transmit the seismic energy and acts as an energy absorber. This pressure bump of significant intensity is instantaneously followed by a dynamic ejection of coal from the longwall face or pillars.

The high induced stresses on and around the coalface can have the effect of closing up the cleats and pores in the coal seam. This can result in a steep gas pressure gradient into the seam. As mining progresses, this pressure can be violently released resulting in an outburst. Therefore, a coal or gas outburst is a sudden and violent expulsion of coal or gas from the surrounding coal mass in longwall mines.

In order to assess the risk of seismic geohazards in a burst-prone coal mine, the moment tensor inversion technique is used [7]. This technique is a mathematical description of equivalent forces and moments in a point source. In this method, the source mechanism is decomposed into basic models of fracture mechanics using an eigenvalue analysis [8].

A general elastodynamic source within a volume  can be represented by a sum of single forces  dependent on location  and time . Then, the displacement  generated at an arbitrary position  at the time  due to a distribution of equivalent body force densities, , in a source volume is calculated from the integral of the Green’s function and the source time function [9]:

See Equation 1 in Images and tables

where  are the components of the Green’s function containing the propagation effects of the medium on the elastic waves between the source  and the receiver ,  is the source volume where  are non–zero, and the subscript  indicates the component of the displacement.

The consideration of three assumptions of one point source, the neglecting of all external forces and one time invariant tensor, yields:

See Equation 2 in Images and tables

where  denotes the temporal convolution and the comma between indices describes partial derivatives with respect to the coordinates after the comma. Therefore the constants  represent the components of the moment tensor,  is the derivative of the Green’s function, and  is the source time function.

See Equation 3 in Images and tables

where  is a seismic source inside a body with zero net force and torque, and each element of this tensor represents a force couple composed of opposing unit forces pointing in the i–direction, separated by an infinitesimal distance in the j–direction. The resulted moment tensor is a good measure to gain a better understanding of the rock failure process in longwall mines.

Mining-related geohazards are directly related to the interaction of mine excavations and geological structures with regional and local stress fields. Seismic energy is released when a frictional instability occurs on pre-existing geological structures, or when new fractures are formed. The resulted geohazard may take the form of rockburst, coalburst, coal/gas outburst, rockfall, pillar burst and roof collapse, which can potentially affect personal safety and mine productivity. As mining continues to greater depths, the impact of seismic geohazards may have substantial economical implications. Therefore, assessment of potential geohazards is critical for the design of effective and efficient mining operations.

In this research to assess the risk of seismic geohazards in a burst-prone coal mine, the moment tensor inversion technique is used. For this purpose, the mining- induced seismic events were monitored, recorded and analyzed to gain more knowledge on the rock failure conditions ahead of time.

The procedure of moment tensor estimation is followed based on the formulae presented in the previous section. The aim of this technique is to calculate a seismic moment tensor based on the radiated seismic waves. The moment tensor is a standard system for description of seismic kinematic sources in the whole range of magnitudes. In this respect, moment tensor inversion is the best method to calculate moment tensor from the recorded seismic parameters. The trick in the technique is to use long–period (low frequencies) regional distance seismic waves. The source process can be reduced to a simple delta function in space and time. The wave propagation is also simplified because filtering regional seismograms to long–periods, result in waves that have only propagated in a few wavelength cycles that can be easily predicted using relatively simple 1D layered earth models.

The resulted waveform for one of the recorded events is illustrated in Fig. 2. According to this figure the maximum displacement for this event in the AFRZ station is about 86.7 nm.

In the next step, the burst-prone zones are identified using resulted waveforms. In the proposed approach it is assumed that the medium at depth on mining is of constant wave velocity. The whole procedure is performed using the presented equations running under MATLAB software.

The result of geohazard assessment for the considered example is presented in Fig. 3.

In this figure the more susceptible zones which lead to a geohazard are those that have more seismic energy. As it can be seen, the results are logically in accordance with the actual conditions. In addition, the results show that there is a direct relationship between bursts and mining activity in strong roof and floor strata. This results are in accordance with the US experience in burst-prone longwall mining [11].

Underground coal mining is growing due to the fact that coal is the most widely used energy source in electricity generation and an essential input to most steel production plants. Nonetheless, coal miners may expose to a wide range of seismic geohazards that cause incidents, diseases, injuries and deaths. The proposed approach may be a practical solution to assess and manage the potential geohazards in the longwall coal mines. In such a way that after identifying the hazardous zones, precautionary measures such as changing the rate of face advancement or installing the energy absorbing support systems may be considered.

There is an accepted philosophy that ground support for burst-prone rock conditions should be energy absorbing. An energy absorbing support system has a high load-bearing capacity, and at the same time it is able to accommodate a large rock deformation. The grouted rebar bolts are the most commonly used support element in mining engineering due to the high load-bearing capacity.

Underground coal mining constitutes serious seismic geohazards by injuring people, damaging workings and equipment, and delaying production. The trend towards highly mechanized mining operations, with high extraction ratios operating at increasingly greater depth, has led to an increased prevalence of the problem in the last decade. Seismic moment tensor inversion technique is employed in this research to better control and to partially alleviate the imminent geohazards occurring during coalface advancement. According to the obtained results, the situation of the burst-prone zones is logically in accordance with the actual conditions. In addition, the results show that there is a direct relationship between bursts and mining activity in strong roof and floor strata. The concluding remark is that monitoring elastic waves generated by rock failure is a reliable approach for timely assessing geohazards and for forecasting dynamic rock failures, consequently better manages disastrous geohazards. 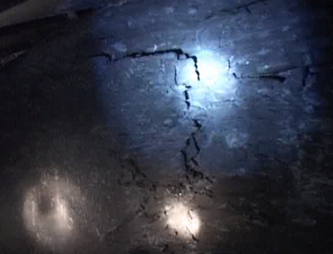 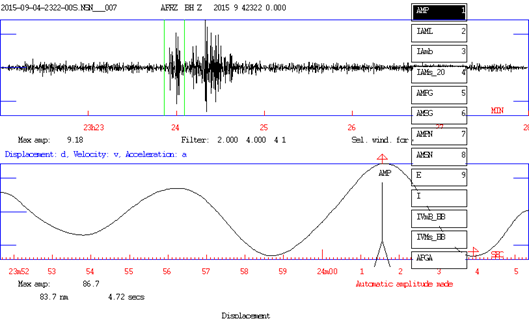