The study examined the influence of climate change and rural-urban migration on agricultural productivity in Southern Kebbi State, Nigeria. A multistage sampling technique was employed and both descriptive and inferential statistics were used to make deductions. The results indicated that 61.7% of the respondents are youths whose major occupation is farming. The major factors that caused rural-urban migration in Southern Kebbi are harsh climatic conditions (9.150), quest for marriage (3.186), pursuit of education (4.353) and search for employment (-2.492) etc. Changing climatic effects and migration decreases agricultural productivity by 49.8%. It is recommended that basic infrastructural facilities and establishment of medium and small-scale agro-allied industries will reduce the outward movement of able-bodied youth and its consequent impacts on agricultural productivity in Southern Kebbi State Nigeria.

Agriculture in the tropics is hampered by upward trend in temperature, fragile soils, low yield potential, aridity and increase in drought risk as drier soil absorbs more rainfall (Barrios, et al 2006). Changes in rainfall can potentially have a wide array of economic implications anywhere in the developing world as rainfall is the main driver of water balance variability both over space and time. Rainfall shortages in Africa is associated with damaging consequences such as food and water deficiencies, displacement and death of population (Barrios, et al 2006).

Increase in the surface temperature leads to an increase in heavy precipitation depending on several factors, which are; atmospheric circulation, vertical temperature profile, moisture holding capacity of the atmosphere and microscale processes (IPCC, 2007). Changes in atmospheric circulation can lead to changes in precipitation regime due to changes in large-scale distribution of atmospheric aerosols, and their effect on the distribution of energy in the troposphere and on the surface; or through an intensification and invigoration of the cloud and precipitation formation process (Berg, et al 2009). According to the Clausius Clapeyron equation there exist a nexus between air moisture holding capacity and temperature, and states that for every potential degree kelvin rise in temperature there is a 7% increase in atmospheric moisture storage (Trenberth et al., 2003).

The propensity to migrate from rural to urban centers is high due to unfavorable climatic conditions in parts of Africa (Gana, 2015; Ango et al, 2014; Mbah et al, 2016). Vulnerability of agriculture to climatic conditions could lead to large-scale migrations of farmers to cities whose livelihood depends on rain-fed agriculture (Barrios, et al 2006). According to the United Nations (2004) report on migration, 60% of global population would reside in cities by 2030 (UN, 2004) which will portend negative consequences on food sustainability and security. In sub Saharan Africa, urban growth is caused by in-migration of agricultural populations as 50% of Africa’s urbanization in times past is majorly influenced by rural–urban migration with variations across countries (Barrios, et al 2006).

Impacts of rural to urban migration are manifold and they are; destruction of the rural economy leading to food insecurity and chronic hunger and poverty, reduction in food production in rural areas and the over utilization and destruction of urban infrastructures due to over population in cities and the emergence of shanties and slums in urban fringes (Yahaya, 2015; Sahabi, 2013; Joshua, 2012; Stephen 2010). This trend in Yauri emirate of Kebbi state in Nigeria has necessitates this research to investigate the role of climate as a driver to rural urban migration and its implication for agricultural productivity in rural areas.

The area is inhabited by the following ethnic groups; Dakkarkari, Fakkawa, Dukkawa, Kelawa, Kambarawa, Katsinawan laka and Achifawa. Other settlers in the area are the; Hausa, Fulani, Yoruba, Igbo etc. The different religions found in the area are Islam, Christianity and traditionalist, However, the traditional worship of different deities is still upheld in the area with many festivals celebrated at various times of the year.

The climate is marked by both wet and dry seasons of which wet season dominates between April to October and dry season between November to February. Average rainfall is between 1025mm and 1050mm/annum, mean temperature range between 31oC and 38oC and soil type is sandy loam which is suitable for agriculture. Animal husbandry is practiced side by side with crop production, on limited scale. The people of Zuru Emirate depend largely on the pastoral Fulani for meat, milk and butter. Hunting is an important economic activity after crop production and a supplement for meat production, hides and skin for shoes, warfare robes and local drums. Other economic activities are pot-making and weaving by women and blacksmithing by men. 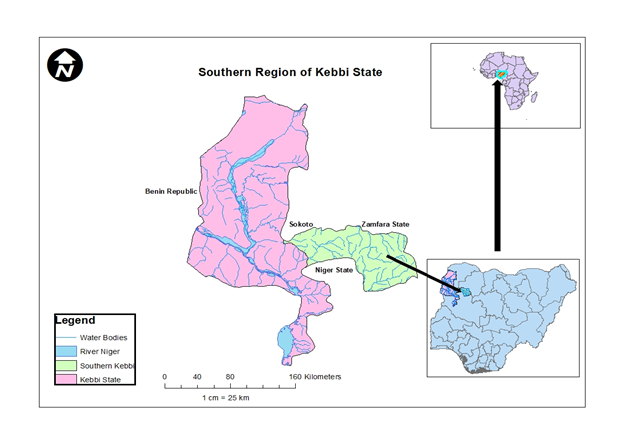 A multistage sampling technique was employed to select 120 respondents which involved the random selection of three (3) major clans and four (4) villages giving a total of twelve (12) villages and 10 persons from each village to give a one hundred and twenty (120) respondents sample size. A structured questionnaire was administered to respondents. Four functional multiple regressions were used to select the best fit. The choice of the best functional form was based on the magnitude of the R2 value, number of significant variables, size and signs of regression coefficients as they conform to a priori expectation. The four functional forms are:

x3=increase in rate of unemployment

x5=increase in the prices of commodities

The implicit form of the correlation is stated thus;

Table 1 showed that 61.7% of the respondents were between the ages of 20 and 49, while 38.3% are the ages of 50 and 79. This implies a dominant youthful and energetic population in the rural demographic structure who have the tendency to migrate to the urban centers in search of greener pastures. Akanbe et al (2006) revealed that the average age of farmers in Nigeria was between 55-60 years and predicted that by 2030, it will rise to between 75-80 years. The consequences on agricultural productivity would be very unpleasant. The table also revealed a very high literacy level (86.70%) among the respondents.

Also, 55.8% of the respondents are males, while 42.2% are females which is consistent with the findings of Agbolahor et al (2013) which revealed a deficit  of males between the age brackets of 15-19 to 40-44 in rural areas as the age brackets with the highest number of urban bound migrants engaged in non-farm occupation especially in Lelna speaking areas and non-Muslim northern parts of Nigeria. The study however showed an excess of this category of people in Southern Kebbi State of Nigeria.

Furthermore, 72.5% of the respondents had household sizes of between 5-11 persons which according to Dada (2011) household size is influenced by the need for extra labour in the farm. Instructively, too, all the respondents earned above the Nigerian minimum month wage of N18000 which is equivalent to 50 US dollars. What this portends is that all the respondents received income above the internationally acclaimed poverty line of one dollar per day and cannot be said to be poor. The relative monthly high income among the respondents is due to their educational status (68.6%) are graduates of secondary and tertiary institutions) which gave them the opportunity to perform dual roles as farmers and government civil servant at the local level with the capacity to earn over 50,000 monthly and equivalent to 150 US dollars.

Finally, 86.7% of the respondents had formal education which makes it possible for a flexible adoption of modern methods of farming and the utilization of improved seedlings and fertilizers.

Table 2 indicates the regression estimates of the effects of climate and rural-urban migration on agricultural productivity in Southern Kebbi State. Parameters considered are upward trend in temperatures, changes in precipitation patterns, changes in extreme weather events and water stress etc. Labour shortages, increase in unemployment rates, fluctuations in the prices of commodities and increased pressure on social amenities were also incorporated.

The R2 value of 0.943 indicates a 94.30% variability in the effects of climate and rural urban migration on agricultural productivity.

The coefficient of increase in pressure on social amenities (-2.492) was negatively related to rural-urban migration and climate change and is significant at 5.00% level of probability. This implies that any increase in pressure of the social amenities, competition arises and various anti-social vices might prevail in urban settlements. Similarly, a corresponding increase in the rate of criminality and decrease in peaceful coexistence and political unrest in such cities might be observed. This is against the a priori expectation.

The coefficients of reduction in water availability (9.150) were also positively related to climate changes and rural-urban migration and highly significant at 1.0% level of probability. This implies that any decrease in water availability, climate and rural urban drift will correspondingly lead to a decrease in the rate of agricultural production. This is in accordance with a prior expectation, as it is believed that when there are water shortages food crop production is grossly affected and bumper harvests of both crops and animals may not be recorded.

Table 3 revealed a negative and significant relationship between climate change, rural- urban migration and agricultural productivity as rate of climatic effects and migration decreases agricultural productivity by 49.8%. This agrees with the prior expectation since migrants form the bulk of labour force in the farming enterprise. In other words, when young people migrate to urban centers farm labor automatically reduces and also food production reduces too.

The study revealed that climate change and rural-urban migration has a direct effect on agricultural productivity in Southern Kebbi state. The study further showed that majority of the young people often migrate to the urban centers due to natural disasters, quest for improved standard of living, pursuit of better education as well as prospects for better employment opportunities thereby leaving the farm for the older generation which is not sustainable and a negative implication on agricultural productivity. Based on the findings, it is recommended that incentives be provide to farmers so as to discourage rural-urban drift especially the establishment of agro-allied industries in rural areas to enable rural dwellers adopt farming as a rewarding and sustainable venture. In addition, more educational institutions, skills acquisition centers and climate modifiers to stem the tides of rural-urban migration and boost agricultural productivity in the area.