a College of Architecture and Environment, Sichuan University, Chengdu, 610065 China

This study aimed to research the nutrient uptake by two microalgae at different initial total nitrogen concentrations in winery wastewater, thus laying a theoretical foundation for the future breeding of microalgae with winery wastewater and exploring the nitrogen and phosphorous removal efficiency by using microalgae cultivation technology as well. Six concentrations of total nitrogen (TN) based on winery wastewater were designed. The two species cultured in winery wastewater with proper initial TN (40.25~360 mg/L for Chlamydomonas reinhardtii; 40.25~120 mg/L for Scenedesmus dimorphus) not only grew well, but also achieved outstanding removal efficiencies for TN and total phosphorous (TP). After 17 days cultivation, for Chlamydomonas reinhardtii, Scenedesmus dimorphus and the co-cultured species, the lowest TN removal rate was 71.69%, 72.84% and 70.67% as initial TN was 1100 mg/L respectively; however, the highest TN removal rate for Chlamydomonas reinhardtii reached to 95.15% as initial TN was14 mg/L. For Scenedesmus dimorphus and the co-cultured species, the highest TN removal rates were 98.85% and 99% respectively as initial TN was 5 mg/L. In addition, the regular of TP removal by two algae was entirely distinct and Chlamydomonas reinhardtii was more positive in TP uptake. These results also suggest that different ratio of N/P caused by diverse initial TN concentration could influence largely algal growth and further nutrient removal.

The development of human societies brings about dozens of pressing problems such as wastewater generation. The distillery wastewater derived by winery industries is rich in compounds of nitrogen (N), phosphorus (P), organics and other nutrients, which will be harmful because of the high pollution potential including eutrophication and toxicity-related impacts [1]. To remove the pollutants in winery wastewater, several treatment strategies have been proposed, such as USAB-UBF-SBR, UASB-biological contact oxidation and AFB-CASS processes [2-4]. However, these conventional pollutants removal processes are too costly to provide a satisfactory solution and would be a waste of resources, thus limiting their application. Besides, improper wastewater treatment may lead to more carbon emission relating to greenhouse effect directly. Therefore, an ideal process should be able to achieve comprehensive wastewater treatment with minimum energy and cost input [5].

Microalgae cultured in the wastewater may provide an effective way to solve the problem. Benefits from microalgae included not only being an available resource but also reducing the demand for the fresh water. The attention to microalgae cultivation for a variety of utilize has been noticeably paid over the last decade, owing to their high photosynthetic efficiency in CO2 fixation, high growth rates and high biomass production [6]. In the environmental field, coupling microalgae cultivation with wastewater treatment seems to be a promising solution to overcome the drawbacks of current treatment processes, which saves the high costs of microalgae cultivation and purifies the wastewater at the same time. Microalgae can usually uptake nitrogen and phosphorous efficiently in a wide range of wastewater [7,8]. It’s also valuable to get biomass generated and other products [9]. Several studies have tested green alga Chlorella vulgaris for a good potential for nutrient removal from various types of digestate such as dairy fertilizer [10], cattle slurry and raw cheese whey [11], and urban WWTP [12]. In these studies, the removal rates of phosphates were reported to be 63% ~ 94% and the removal rate of ammonia was nearly 100%.

Studies have confirmed that a variety of different properties of waste water after appropriate treatment can be used to cultivate energy microalgae, such as green algae, Cyanobacteria, Chrysophyte etc. Chlamydomonas is a genus of unicellular algae that has been used for decades as a model organism for molecular biology [13,14], which is also applied to biomedical engineering [15]. However, investigations about Chlamydomonas involved in distillery wastewater treatment or its pollutants tolerance were insufficient. On the contrary, Scenedesmus dimorphus, a kind of simple, easily harvested green microalgae, are more reported to culture combining with wastewater [16,17]. It is very necessary to figure out the growth and nutrient up taking characters of Scenedesmus and Chlamydomonas for resource recycling. Besides, the application of microalgae for comprehensive treatment of wastewater is of great interest as it avoids the need for additional treatment processes [5].

This paper investigated the influence of nitrogen on the growth of two different algae Scenedesmus and Chlamydomonas and showed the characters of the two algae in winery water. The results would contribute to the further research on using algae to treat winery wastewater.

Chlamydomonas reinhardtii and Scenedesmus dimorphus were isolated from college of life sciences, Sichuan University, China. Algalpre-culture was prepared by inoculating Water Culture medium with Chlamydomonas reinhardtii and Scenedesmus dimorphus in 250 ml flasks respectively. Cultures were maintained at room temperature (20℃) with 12h: 12h (light : dark) cycle under illumination from lamps at 25±2.5 μmol m−2 s−1. To maintain algae suspended, the culture was shaken manually twice a day. The pH adjustment of the medium to 7.0±0.2 was done using NaOH. The raw wastewater was obtained from a winery industry of Chengdu. Prior to experimentation, the raw wastewater was first stirred 30 min adding bentonite then centrifuged at a low speed (3500 r/min), filtered through Millipore filter (synthetic fabric CN-CA), next adjusted the pH to 7.0±0.2, autoclaved at 121℃ for 30 min at last. Compositions of the distillery wastewater after autoclaving were shown in Table 1, and unless noted otherwise, only the soluble and sterile fraction was used for microalgae growth and biodegradation test.

Biomass generation of Chlamydomonas reinhardtii and Scenedesmus dimorphus at 4 different diluted wastewater (0.83%, 1%, 1.25%, 2%, wastewater : water, v/v) were observed for 7 days to make sure a proper dilution condition [4]. Then, they were separately and together inoculated into winery wastewater at a proper diluted dose at 6 different nitrogen concentrations (5, 14, 40.25, 120, 360, 1100 mg/L) set by NaNO3. All the experimental sets were inoculated with 0.6% of stock culture and were done with three replicate at room temperature (25℃) with 12h: 12h (light : dark) cycle under illumination from lamps at 50±5μmol m−2 s−1. Every other day, 10mL culture was withdrawn from each flask to determine the biomass of microalgae, and the contents of TN, TP, COD (Chemical Oxygen Demand) as well.

The algal dry weight was determined by weighing method. First, put the medium in the centrifuge tube. Then centrifuge and wash for three times. After that, vacuum drying at 80℃ or 40℃, and then weighing.

Specific growth rates (µm) were estimated in relation to the following method [18]:

where t1 and t2 were the duration of cultivation, X1 and X2 were the concentrations of biomass at day t1 and t2 respectively.

The nutrient removal efficiency (Ei) was calculated according to the following Eq. (2):

3.1 The growth potential of algae cultured in winery wastewater

Each microalgae has its appropriate ecological habitat and could deal well with certain wastewater treatment, cultivation and bio-energy production [22]. Six concentrations (1.1%, 1.4%, 1.7%, 2.7%, 6.8%, 13.5%, wastewater : water, v/v) of winery wastewater were selected according to Yu’s experiment to screen for the suitable condition that Chlamydomonas reinhardtii and Scenedesmus dimorphus are capable of growing well and removing nutrients of TN and TP in winery wastewater [4]. The results showed that Chlamydomonas reinhardtii and Scenedesmus dimorphus could grow well in most of wastewater despite in 6.8% and 13.5% winery wastewater. It indicated the occurrence of an inhibition phenomenon due to high nutrient contents as other previous reports [23,24].

The results presented in Fig.1 illustrated that both Chlamydomonas reinhardtii and Scenedesmus dimorphus were able to sufficiently remove nutrients from wastewater after being cultivated for 6 days in four concentrations of winery wastewater. Obviously, the higher concentration among 1.7% to 2.7% is more appropriate for economy and practical applicability. So, the medium for further research was based on 2.5% winery wastewater in which initial TP kept 16.4 mg/L.

Amazing reductions in COD concentration were also found for all samples in Fig.3 after 17 days cultivation. It has been reported that several microalgae are mixotrophic species as they can assimilate CO2 and organic carbon simultaneously [26,27]. Results showed the change of initial TN concentration had no significant effect on COD removal. However, as the initial TN concentration reached 1100 mg/L, there were apparently lower COD removal rates. At the end of cultivation, Scenedesmus dimorphus and the co-cultured species showed higher removal capacity of COD. The COD removal rates by the two cultivation systems are over 85%, the final COD concentration decreased to 62 mg/L and 97 mg/L respectively, which met the national discharge standards of COD in most western countries. 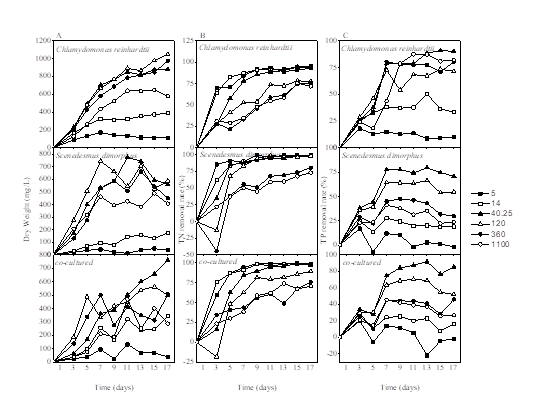 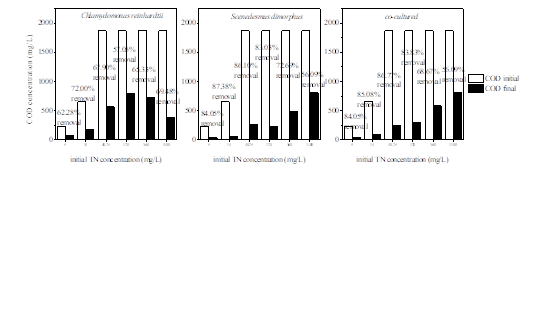 Fig.3: Removal rates of COD when microalgae cultured in winery medium with different initial TN concentrations. 5, 14, 40.25, 120, 360 and 1100 represent six domesticated concentrations of initial TN; the initial TP concentration for all samples was 16.4 mg/L

The results above have showed that the appropriate initial TN concentration with 40.25 mg/L would promote both microalgae growth and nutrient removal in winery wastewater. Fig.4 and Table 2 illustrated the relationship among remaining nutrient concentration and microalgae biomass when initial TN concentration was 40.25 mg/L. It’s clearly that both the remaining nutrients of TN and TP kept a linearity bond with algae biomass concentration. However, linearity bond of remaining TP with the co-cultured species was not strong, in which R2 was lower than 0.75. This might be due to the complex competition between two species. In a word, all correlation coefficients signified TN and TP are both important nutrients for algae cell grew closely. 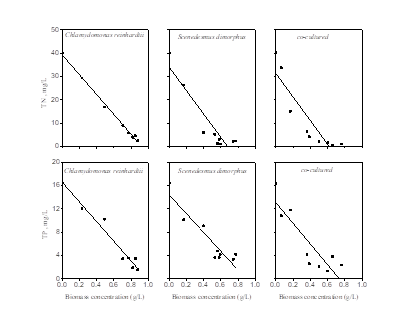 Table 2:  The relationship among the remaining TN, TP and biomass concentration for different algae

On the other side, algae growth correlated with not only the remaining nutrient, but also the ratio of TN/TP. Sun’s experiment showed when the ratio of N/P was at 80, Karenia mikimotoi displayed a highest growth rate [28]. However, Long pointed out microalgae could not grow well when the ratio of N/P was too low or too high [29]. Hence, this study analyzed the remaining ratio of N/P and SGR (specific growth rate) on Chlamydomonas reinhardtii and Scenedesmus dimorphus. Results in Fig.5 and Table 3 proved the molar ratio of N/P linked with algae growth essentially which were not the same as Sun’s study [28]. This might owe to the different kinds of microalgae and diverse concentration designs. It was found a kind of power function equation, Y=a*X^b (both a and b were constants; X: the ratio of N/P; Y: SGR), to state that dynamic relation more precisely (R2 > 0.75) when ratio of N/P exceeding 20. What’s more, Chlamydomonas reinhardtii showed a faster growth rate and lower TN uptake compared with Scenedesmus dimorphus at the same nutrient level. Generally speaking, the initial TN determined the accumulation of microbial biomass. Besides, the ultimate TP concentration played a more susceptible role for not only growth limit and low SGR but also a low nutrient removal rate eventually. This was in accord with Song’s study [30]. 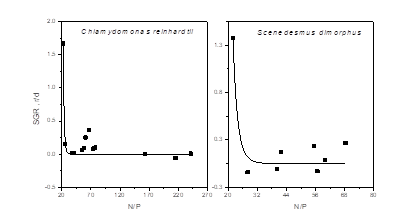 Fig.5: Correlation between the molar ratio of N/P and SGR (specific growth rate)

Table 3: Dynamics of two microalgae between the molar ratio of N/P and SGR (specific growth rate)