Background: The scope of molecular modeling techniques is enormous, reflecting the spectrum of knowledge and scientific domains that may be involved. It can be valuable in the identification of therapeutic targets, typically protein receptors whose specific role in a pathology is characterized. It may then prove indispensable in the development of chemical inhibitors for this target.1, 2, 4 triazol derivatives are recommended in treatment of hypertension.

Methods:The study of the interaction of the enzyme 11β-HSD1 - derived from 1, 2, 4-triazol by molecular modeling and precisely the molecular docking in solvated and unsolvated medium leads to the most stable complex. This study is based on the comparison of the theoretical and experimental results of the literature.

Hypertension is the most important risk factor associated with stroke and heart disease. We talk about high blood pressure when blood pressure is high in the arteries, so the heart makes more effort to pump blood into the blood vessels [1].

Theoretical methods, such as molecular modeling [2], now make it possible to study the interaction between enzymatic and biologically active molecules. Water plays a very important role in the biomolecular structure, so it is essential to represent the solvent around the solutes in the molecular modeling studies.

The explicit solvation method represents the solvent in a microscopic manner. In this case, a solvation cage is generated around the molecule. Quite simply, a number of solvent molecules (water) corresponding to its density are added randomly. A box or sphere of a defined size is created around the molecule that is filled with water molecules [3]. Many molecular docking software has been used in solvated media [4] such as Chemira, Hex, MolegroVertualDocker, and MOE (Molecular Operating Environment) software [4]. For our work we use the software MOE

Preparation of protein and ligands

The enzyme was prepared for molecular docking by adding all the hydrogen atoms using standard procedures. The heteroatoms of co-crystallization were suppressed.

Minimization of the energy of the enzyme simplify equal to 3.928kcal / mol

The preparation of the enzyme is done by creating the active site and isolating it to do the molecular docking in a well-designated active site.

Before calculating the interactions between the enzyme and the four compounds, it is necessary to evaluate the parameters allowing their validation as a drug.

The Lipinski rule also known as the five rule (RO5) is a basic rule for evaluating or determining whether a chemical compound possesses pharmacological or biological activity. The rule was formulated by Christopher A. Lipinski in 1997; it is based on observation and informs us that the drugs administered orally are relatively smaller and moderatelylipophilic [6,7].               According to Table 1, the ligands satisfy the Lipinski rule. This additional information on other molecular properties confirms that these molecules are biologically active.               The optimization of inhibitors was performed with hyperchem8.0.3software [8] to achieve the most stable conformation. In Table 2 we represent the energies of our molecules.

The set of simulations that will be presented in this work was done using a solvent model explicitly represented. To study an explicit solvent molecule, it is necessary to solvate it, that is to say to immerse it entirely in a "solvent box". This method represents each molecule of water around solute as a given triatomic molecule, as shown schematically in Fig5.

A sphere (shape) of a defined dimension is created around the complex that is filled with water molecules (solvent).

The best placement of the ligand in the active site of the enzyme was chosen according to the best score.

The results of the interaction energies obtained by the MOE software are in the form ΔG (free energy), the latter being correlated with inhibitor constant Ki of the same complex according to the following formula [9-10]:

Constant of inhibition Ki is given in the following relation:

Ic50 values are determined experimentally in the literature [11].

From the results obtained, it can be seen that for the 11β-HSD1_MOL4 complex at energy equal to -11.71 Kcal / Mol with a weak RMSD it is the most stable complex. It is concluded that MOL4 is probably the best inhibitor for the enzyme.

The linear regression analysis performed between the interaction energies and IC50 (log IC50) provides a scatter diagram with a correlation coefficient equal to 0.693. This value indicates that the two variables are highly correlated and thus demonstrate the high performance of the MOE program.        From the results obtained, it can be seen that the 11β-HSD1_MOL4 complex with an energy equal to -11.71 Kcal / Mol with an RMSD equal to 0.88 (Å) is the most stable complex. It is concluded that L4 is probably the best inhibitor for the enzyme

The results of the molecular docking of the four complexes have an RMSD value of less than 2Å. The RMSD between 0Å and 2Åshe is considered low and between 2Å and 4Å is assumed to be average. RMSD greater than 4 Å is strong. The prediction of the ligand is acceptable if the value does not exceed 2 Å [12].

From the results obtained, the interactions formed between our ligands and the residues of the active site of the enzyme 11β-HSD1 are between 2.65 Å, and 4.31 Å.

The formation of a stable complex depends on the binding of the inhibitor to the active site. Fig 6 presented above shows that the ligand MOL4 forms in the enzymatic cavity formed by the residues of the active site, which means that there are interactions which stabilize the complex and then a better fixation of this inhibitor at the level of the cavity of the enzyme.

In the second step, the side chain B has been replaced by other groups:

The fluorine-containing mesomer donor effect increases the conjugation of the aromatic ring as well as the stability of the complex formed between the enzyme 11β-HSD1 and inhibitor 4.From the results obtained, the complex inhibitor 4 is the most stable.

In order to determine the enzyme-substrate interactions we have carried out molecular docking calculations in order to find the most stable conformation which corresponds to the lowest energy adopted by the complex formed.

Water molecules in enzyme cavities can sometimes be a fundamental element. They are able to ensure the relay between the receptor and the ligand and thus create networks of hydrogen bonds. 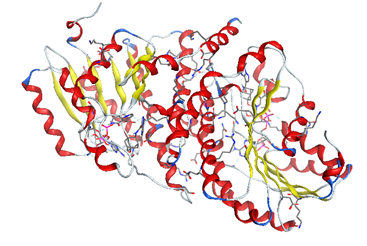 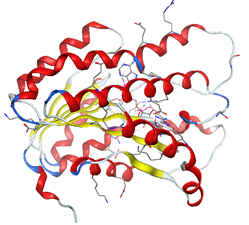 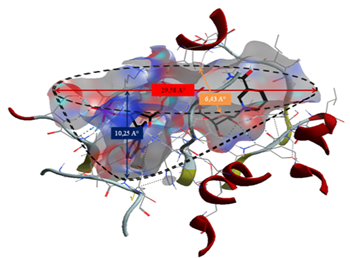 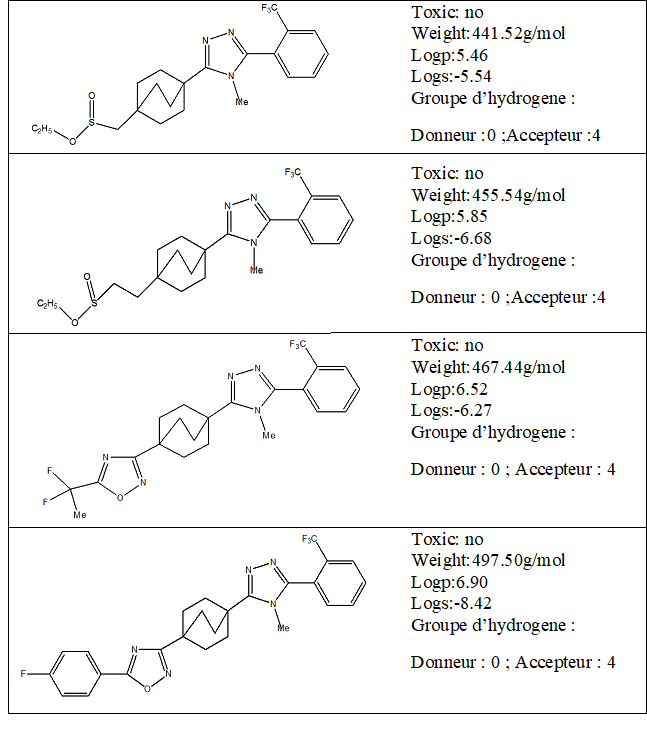 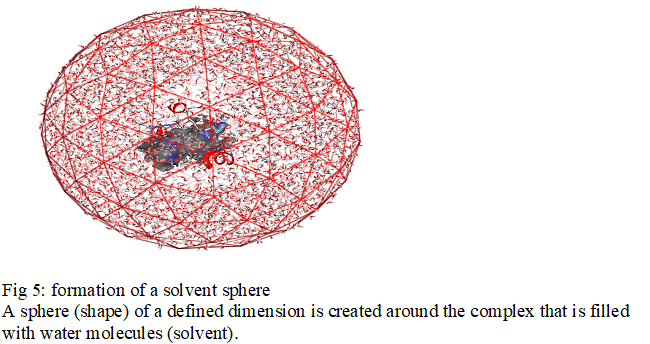 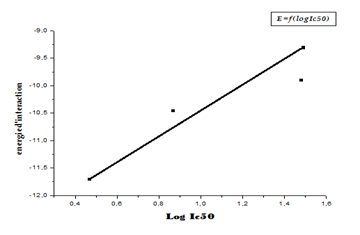 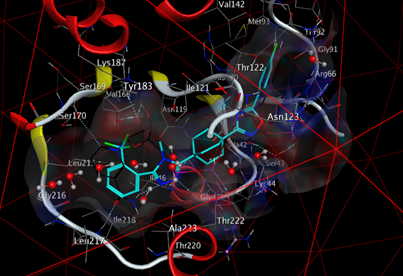 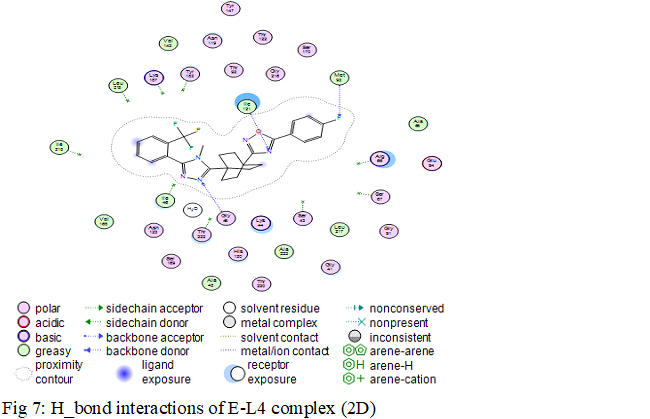 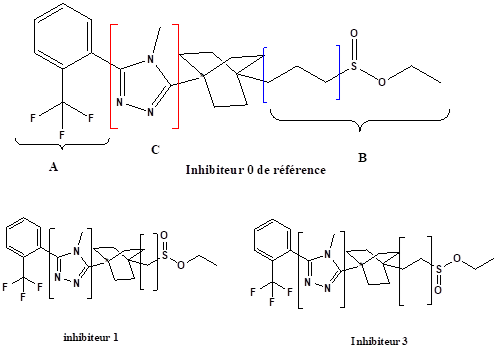 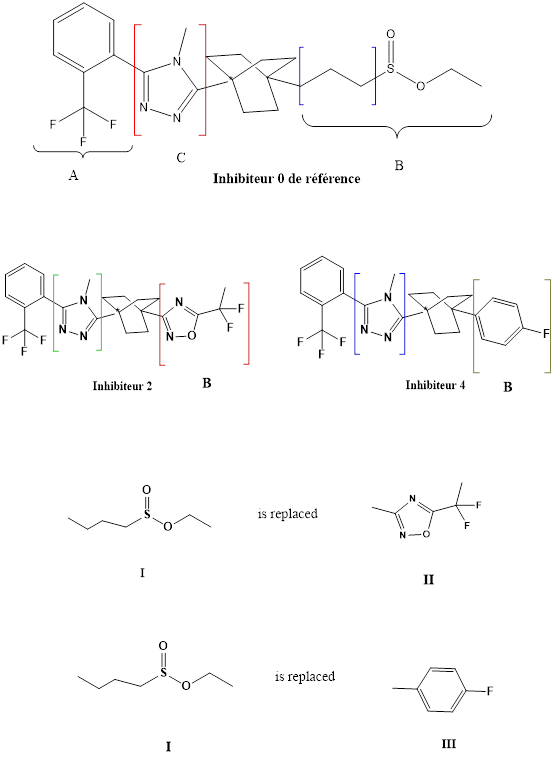