The thermodynamics of complexation and thermal properties of mixed ionic complexes of the types M(H2L)X2 and M(HL)X  (where M = Fe(II), Fe(III),Co(III), Ni(II), and Cu(II)., L = bis(2,2/-methylylidenephenol)diaminoethane, and X =  anions of the types Cl-,  NO3-, SO42-, ClO4- or OH-) prepared  using extractive method have been investigated. Thermal decomposition of the transition metal complexes took place in two or three distinct steps in exothermic reaction up to 800°C. The heat capacity change (), transition midpoint temperature (Tm), entropy change (), calorimetric enthalpy, Gibbs free energy change (), denaturation enthalpy ( )) and denaturation entropy () were calculated from the results of differential scanning calorimetry (DSC) while Vant Hoff thermodynamic properties was used to calculate the stability constants of the complexes in solution. It was found that the stability constants of the complexes follow the order Fe(II) > Fe(III) > Cu(II) > Ni(II) > Co(II) while the denaturation enthalpy and entropy of the complexes follow the order Ni(II) > Fe(II) > Fe(III) > Co(II) > Cu(II) respectively.

The development of the field of inorganic and physical chemistry has increased in recent years with increased synergy especially in the area of Schiff bases and their transition metal complexes.  Bis(2,2/-methylylidene phenol)diaminoethane its derivatives and transition  metal complexes have played significant role in bioinorganic chemistry and applications [1-2]  in catalysis and in electrocatalytic reactions [3-5], as oxidizing agent [6-7], as nanocomposite and nanoparticles [8-9], as corrosion inhibitor [10], in carbon capture for purifying the environment [11],  as  red phosphorescent light emitting diode (Ph OLEDs) [12] and as metallomesogens [13].

Even though some authors [14-16] have incriminated some Schiff bases and their metal complexes as potential antimicrobial agent, none have related the thermodynamic stability and denaturation enthalpy and entropy to the biochemical nature of the synthesized metal complexes. Similarly some authors [12,17-18]  who worked on H2L and complexes only concentrated on melting point determination and thermal stability without indepth treatment of the thermodynamic properties.  Again, most studies concentrated on complexes of H2L prepared using constituent combination method [19] but this work was on the thermal and thermodynamic properties of H2L complexes prepared using extractive techniques. In this work, spectral, thermodynamic and thermal methods were applied in the characterization of H2L transition metal complexes which are very important in bioinorganic chemistry and applications.

An aliquot of a sample solution containing 100µg each of Fe(II), Fe(III), Cu(II) ,Ni(II) and  Co(II) was transferred into a 20 mL calibrated extraction bottle and volume was made up to 5 mL with acid solution of concentration 0.0001M. This was followed with the addition of 0.5mL of ligand solution. 5minutes for colour development was allowed and complexes formed extracted with 5 mL chloroform. The organic extracts were allowed to dry and product recrystallized using carbon tetrachloride, dried and characterized (M.P ˃2500C for Fe(II) while for Fe(III), Cu(II) ,Ni(II) and  Co(II)  M.P ˃3000C).

Figure 1: synthesis of the ligand H2L

The sample and reference pan were placed at separate furnaces maintained by separate heaters. Both sample and reference were maintained at same temperature and the difference in thermal power required maintaining them at the same temperature measured and plotted as a function of temperature or time. Differential heat flow was due to heat capacity associated with heating the sample. Small samples (5.00 mg) were weighed into an alumina crucible and mass noted. The crucible was covered with its cover usually slightly smaller. The TA Blue DSC sample press was used to close the crucible. The enclosed sample was placed side by side with the empty alumina crucible as reference. The instrument was purged with ultra pure N2 gas at regulated pressure between 100 and 140 Kpa guage (15 and 20 Psi). The gas flow rate was set at 50 mL per min and experiment run from room temperature to 800 0C at scan rate of 10 0C min.

The electronic spectrum of cobalt (II) oxidized to Co(III) complex a d6 ion consists of three bands in the region 25000, 29851 and 38462 cm-1. The appearance of the band in the region 25000cm-1 assignable to  indicated  distorted octahedral geometry around the cobalt(II)  ion whereas the band in the region 29851 and 38462 cm-1 are due to  charge transfer transitions [26-27]. Similarly the broad band region of the electronic spectra of Co3+ a d6 covering the long wavelength region 335-400 nm was assigned to an octahedral  transition [28].

The Vant Hoff thermodynamic properties of H2L and HL complexes are shown in table I. Entropy and enthalpy changes were positive for all the complexes. The stability constants of the complexes increased in the order Fe(II) > Fe(III) > Cu(II) > Ni(II) > Co(II).

C1 is the amount of metal ion complexed per unit mass of ligand and C2 the concentration of metal ion in the aqueous phase [33].

Thus, T represents the temperature in K while R is the universal gas constant (KJ Mol-1k-1). The thermodynamic values  are given in Table 2.

The kinetics of complexation of metal ions to the ligand (H2L) at different contact time (1,  3, 5, 10 and 15 minutes) and at constant ligand and acid concentration of 0.5 %  and 10-4 M respectively was performed. Contact time of 10,5,10, 10 and 5 mins was sufficient to achieve equilibrium for iron (III), iron(II), cobalt(II), nickel(II) and copper(II) metal ions complexation with H2L ligand respectively. The commonly used kinetic models were applied on the complexation data the Lagergren pseudo-first –order model and pseudo-second –order shown in equations 5 and 6 respectively.

qe is the amount of metal ion complexed with  ligand at equilibrium (µg) and qt is the amount (µg) of metal complexed at time t (min) whereas K1 and K2 are rate constants of pseudo-first order and second –order models respectively. A linear plot of In(qe-qt) versus t for Pseudo-first –order model and t/qt versus t for second –order –model clearly described the relevance of the models with the slopes as K1 and K2 respectively. Based on the high regression coefficient of the metal ions complexation on the ligand as shown from the pseudo-second –order kinetic model (R2 =0.9984, 0.9993, 0.9948, 0.9983,0.9994 for iron(II), iron (III), cobalt(II), nickel(II) and copper(II) respectively in relation with pseudo-first –order kinetic model (R2=0.6634, 0.6102, 0.3382, 0.383 and 0.6118 for iron(II), iron (III), cobalt(II), nickel(II) and copper(II) respectively), the complexation was best described by the Pseudo –second –order kinetic model.

Table 2:  Thermodynamic Data on the DSC Decomposition of H2L and HL Complexes.

Calculations from DSC data as shown in table II, presented negative values of at some steps indicating the reactions are slower than expected thereby establishing nonspontaneous nature of the reaction. Positive value o in some steps supports the nonspontaneous nature of the degradation process [36]. Similarly, the positive value of enthalpy indicated the endothermic nature of the degradation process [37]. values indicated that the transition is highly co-operative as denaturation occurs within narrow range of temperature [37-38]. Based on the results, degree of denaturation entropy and denaturation enthalpy of the H2L complexes increased from Ni2+ Fe2+ Fe3+Co2+ Cu2+.

The values of   was derived from the relation in equation 7 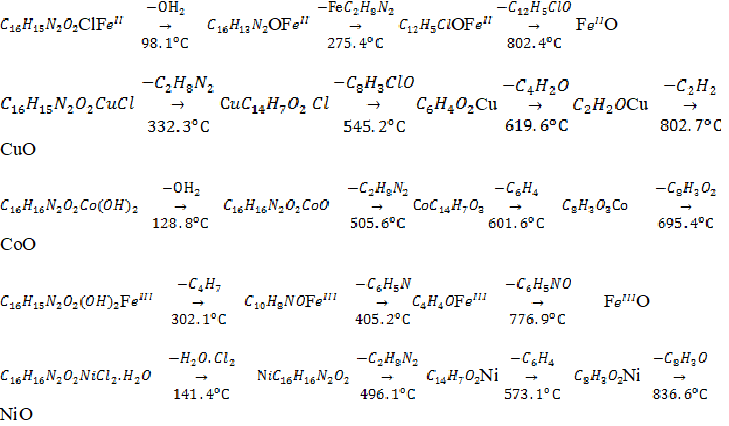 In conclusion, the thermal properties of the complexes of H2L synthesized using extractive technique have been critically studied. The complexation which indicated formation of mixed ionic complexes was nonspontaneous and the DSC decomposition of the complexes have shown their degrees of biochemical stability.