Fifteen imidazolidine nitroxide radicals were synthesised, and their stabilities against ascorbate were investigated. Among them, it was found that radicals bearing OH groups exhibited improved stabilities. In addition, density functional theory calculations, evaluation method of steric shielding effect around nitroxide radical reaction center based on molecular volume within a virtual ball, multiple regression analysis showed that the half-lives of these radicals were influenced both by steric effects and by the charge on the ring nitrogen atom.

Nitroxide radicals are stable free radicals that are employed in a range of applications, including as organic molecular catalysts [1,2], radical scavenging agents [3,4] MRI contrast agents [5], spin labelling agents [6,7,8], and radical trapping agents [9]. Among the nitroxide radicals reported to date, various non-toxic compounds have been used as test substances in vivo, with examples including pyrrolidine [5,10], imidazole [11], imidazolidine [11,12], and piperidine [13]. In particular, the 3-carboxy-2,2,5,5-tetramethylpyrrolidine 1-oxyl (3-CP) free radical, which contains a pyrrolidine skeleton, has been used as an in vivo probe due to its high stability. However, 3-CP can be deactivated in vivo by reducing agents such as ascorbate (Vitamin C) with a half-life of 2 min, and so a higher stability is required for such applications [6,10].

The stability and reactivity of nitroxide radicals vary greatly depending on their molecular structure. For example, the introduction of bulky alkyl substituents close to the radical centre and/or delocalization of the spin density  is considered a general method to alter the properties of nitroxide radicals [10]. For example, tert-butylphenyl nitroxide is unstable, but replacement of the Ph group with a 10-substituted anthracene moiety produces a stable species [14]. In addition, molecules in which the Me group of 3-CP is substituted with an Et or spiro cyclohexyl group are more stable towards reducing agents [10]. Although steric shielding and electronic effects are believed to be responsible for these changes, to date, they often remain in a qualitative discussion and require further consideration.

Various attempts to quantify the steric shielding effect imparted by the substituents have also been carried out. For example, Taft’s constants [15,16] Hirota’s steric parameter Ωs [17,18,19], Denisov’s shielding parameter bre [20], and Tolman’s cone angle model [21] have been reported. However, in many cases, calculations into steric factors are based on the limitations of applicable systems, and the calculation methods are complicated. To address these issues, Tomilin and co-workers developed a method combining versatility and convenience that quantifies the degree of steric shielding from the number of atoms contained in a ball, and applied it to predict the reaction point in the radical dimerisation process [22]. However, it seems that such evaluation based on the number of atoms is inaccurate.

The stability of the nitroxide radical was also found to change depending on the electronic state of the radical itself. For example, Yamasaki and co-workers correlated the reduction rate of nitroxide radicals by ascorbic acid with the energy gap between the SOMO-LUMO orbital using the soft-hard theory [13]. The effect of the substituents on the stability of the radical can be accounted for by considering the electron withdrawing or donating effect, and although it was reported that the electronic effect appeared to be more dominant than the steric effect, insufficient consideration was given to the steric effect.

Furthermore, Kirilyuk and co-workers conducted multiple regression analysis of the reducing properties of imidazoline and imidazolidine nitroxides based on Fujita steric constants and the Hammett constant [23]. They concluded that the oxidation properties of the nitroxides are determined by the steric and electronic effects of the substituents, and the state of the ring nitrogen atom appears to play an important role in determining the stability.

To investigate the steric and electronic effects imparted by various substituents, we employ nitroxide radicals based on the imidazolidine skeleton. Fifteen radicals including one novel compound will be synthesised, and their stabilities will be measured based on their half-lives. The use of half-life as a kinetic indicator is controversial, but it is useful as a simple indicator.

In addition, to investigate the parameters related to proton addition onto ring atoms, the most stable structures will be determined using density functional theory (DFT) calculations, and the contribution of the electronic effect will be discussed.

The structures of the fifteen radicals employed herein are shown in Fig. 1. Nitroxides 1–15 will be synthesised over 4–5 steps using common synthetic routes (Scheme 1) [24,25,26]. Using the corresponding ketones, the desired alkyl groups (i.e., Me, Et, Pr, and spirocyclohexyl) will then be introduced at the R1 position. Compounds 1–8 will then be obtained through oxidation with mCPBA. Compounds 1–3 and 5–7 will then be reacted with trimethyloxonium tetrafluoroborate to yield compounds 9–11 and 12–14, respectively. Compound 15 will be obtained by introducing a benzoyl group into tetramethylimidazolidine using benzoyl chloride and subsequent reaction with mCPBA [27]. Nitroxides 3, 7, 11, 14, and 15 are novel compounds. 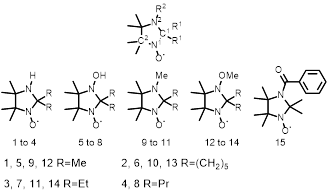 Fig. 1 Structures of imidazolidine nitroxide radicals 1–15 used in this study.

Initially, to investigate the steric effects of the substituents, steric shielding was evaluated by setting a virtual ball centred on the radical atoms and measuring the volume of the molecules contained within the ball (volume ratio) [30]. As shown in Fig. 2, the close-packed model was employed. More specifically, the close-packed model was constructed by considering that the bond length of the target atom is Ln (n = number), and by calculating the volumes of the balls with a radius of half of Ln. Subsequently, setting the average volume as the volume of the target atom, the radius of the target atom was determined from the calculated volume. 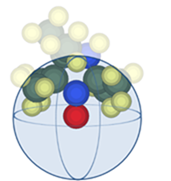 Fig. 2 Image of the close-packed model of nitroxide 1. 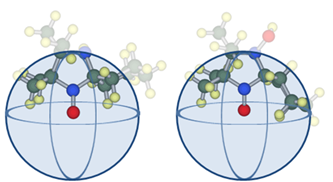 We also investigated the reduction kinetics of the nitroxides using ascorbate to determine their stabilities. To measure the half-lives of the various compounds, they were exposed to a 20-fold molar excess of ascorbate in an organic solvent (acetonitrile-methanol) and the stabilities of the radicals were determined from the degree of reduction in the electron spin resonance signal. For comparative purposes, 3-CP and TEMPO were also evaluated using the same method.

For each molecule, five stable conformations were calculated by molecular mechanics using the MM3 force field [28] followed by optimisation using Gaussian 09 at the UB3LYP/6-31G* level of theory. In each case, we defined the most stable conformation based on enthalpic comparisons.

The half-lives of nitroxides 1–15, the charges on the N2 atoms, and the volume ratios in the most stable conformations as determined by DFT calculations are shown for each radical in Table 1. More specifically, the data presented suggest that molecules bearing Et or Pr groups at the R1 position are stable against ascorbic acid. This result is consistent with those of a previous study [10], suggesting that electron donating groups, substituents with limited free rotation, and bulky substituents increase the stability of the radicals. In addition, when highly electronegative atoms such as oxygen are adjacent to the N2 atom, the radical tends to be stable. Interestingly, compound 7, which bears an Et group at the R1 position and an OH group at the R2 position exhibited a half-life ~1.5 times greater than that of 3-CP and ~6.4 times greater than that of TEMPO.

Nitroxides 2, 6, 10, and 13 bear a spirocyclohexyl group at the R1 position. It was found that the optimised conformation of the N2 atom of 2 takes the axial position, while in the other three molecules, the N1 atoms adopt the axial position. Figure 3 therefore confirms that in the latter compounds, the substitution sterically shields the O• atom. The results of comparing the stability in each of the axial and equatorial conformations are described in supporting information.

As shown in Table 1, the volume ratio of nitroxide 2 is 8.9%, while those of 6, 10, and 13 are >10%. This indicates that the visual differences shown in Fig. 3 could be clearly quantified, thereby confirming the effectiveness of this method.

We then moved on to examine the stabilities of the various nitroxide radicals in the presence of ascorbate using a range of calculations. In addition to the volume ratio, which is a steric factor, the atomic charges on the N1 and N2 atoms. The atomic charge of each atom was calculated by the Breneman model[32], the spin densities on the O• atoms, and the SOMO-LUMO energy gaps of the radicals were calculated and compared with the obtained half-lives. As shown in Fig. 4, the highest correlation was observed between the atomic charge of N2 and the half-life (R2 = 0.75). 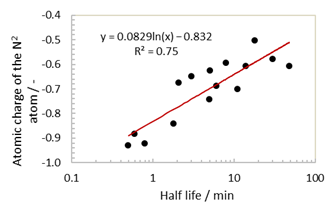 Fig. 4 Plot of the atomic charge of N2 against the nitroxide half-lives in ascorbate solution.

In biological systems, both the reduction of nitroxides and the reoxidation of hydroxylamines are known to contribute to the lifetime of the nitroxide radical [10,29]. As such, the nitroxide radical’s half-life depends on the stability of the corresponding hydroxylamine. In addition, protonation of the heterocycle on the nitrogen atom of the hydroxylamine stabilises the molecule [22] while also destabilising the nitroxide radical. Thus, in the case of a structure bearing an electron-withdrawing group (e.g., OH) with a small atomic charge on the N2 atom, the reduction reaction by ascorbic acid is limited. Reoxidation is therefore promoted and the stability of the radical is enhanced. This result is consistent with previous studies [11].

However, this result does not mean that electronic effects are the only factors that contribute to stability, as steric factors must also be considered. As shown in Table 1, no significant differences were observed between the charges on the N2 atoms of nitroxides 5, 7, and 8, while significant differences in half-lives were apparent for these compounds. As the volume ratios are larger for radicals 7 and 8 than for 5, it is considered that this difference in stability may be due to steric shielding from the Me, Et, and Pr groups. Indeed, nitroxide 6, which bears a spirocyclohexyl group, gives the largest volume ratio; however, since the electron donating effect of the cyclic alkyl group increases the charge on the N2 atom, the enhanced stability is lower than suggested by the volume ratio. A similar tendency can also be seen in compounds 1−4, 9−11, and 12−14. It is therefore apparent that radical stabilisation takes place due to steric shielding, but this plays a small role compared with the electronic effects. For a more detailed examination, multiple regression analysis was carried out (Fig. 5).

where C_(N^2 ) is the atomic charge on the N2 atom and V is the volume ratio. It was found that the radical becomes more stable as the charge decreases and the volume ratio increases. In addition, through comparison of the standardised partial regression coefficient, the electronic effect (βCN2 = 0.80) is more dominant than the steric effect (βV=0.33). 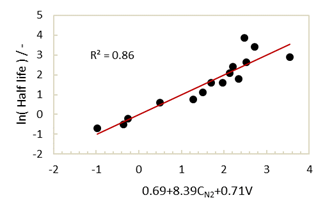 In conclusion, fifteen imidazolidine nitroxide radicals were successfully synthesised, and their stabilities against ascorbate were investigated. It was found that radicals bearing OH groups exhibited improved stabilities. In addition, from DFT calculations, we found that the influence of electronic factors on the radical stability is more dominant than that of the steric effect estimated by VSS. Although more detailed analysis of the mechanism may require calculation of equilibrium constants, calculation of kinetic parameters, pH, solvent effect etc., some prediction has been achieved among the limited substrates and reaction conditions. From this prediction, it is noteworthy that the charge on the ring nitrogen atom is key in determining whether proton addition occurs in addition to influencing the radical stability. We believe that the effect of the structural and electronic factors is not limited to radical stability. Further studies will be conducted to determine the relationship between this contribution and various functionalities of the nitroxide radical, such as its performance as an organic molecular catalyst or its radical scavenging ability.

We are grateful to Professor Kazuhisa Sakakibara (Department of Advanced Materials Chemistry, Yokohama National University) for the experimental advice.