Synthesis and characterization of 16β-azidopregn-5-en-3β,17α-diol-21-one are reported. The azido steroid was studied by docking simulations as a substrate for a range of steroid-converting enzymes, including bacterial cholesterol oxidase and mammalian cytochromes P450 17-hydroxylase/17,20-lyase (CYP17A1) and 21-hydroxylase (CYP21A2). The derivative was calculated to localize similarly to natural substrates with binding energy values ranging from -7.2 to -11.9 kcal·mol-1. A fluorescent triazole derivative of 16β-azidopregn-5‑en-3β,17α-diol-21-one has been obtained using click chemistry approach. The azido steroid is proposed as a suitable molecular tool for studies of steroid biotransformations.

16-substituted steroids are of interest to medicinal chemistry as potential anti-proliferative and anti-cancer pharmacological agents [1]. Moreover, such steroids can be further functionalized with either pharmacophore moieties or labeling fragments. Although a number of molecular modeling studies on 17‑substituted steroids are available there are few reports on corresponding 16‑compounds [2, 3]. Here we report the synthesis and docking simulations of 16β-azidopregn-5-en-3β,17α-diol-21-one as well as its fluorescently labeled derivative. The enzymes of choice consisted of bacterial cholesterol oxidase and mammalian cytochromes P450 17-hydroxylase/17,20-lyase (CYP17A1) and 21-hydroxylase (CYP21A2). CYP17A1 and CYP21A2 were chosen due to their implication into pathogenesis of prostate cancer and some others human steroidogenesis disorders, whereas cholesterol oxidase is involved in initial stages of cholesterol catabolism by some pathogenic bacteria, e.g. Gordonia species [4-6].

The reaction was performed on nanomolar scale in the presence of 5-fold excess of CuSO4 and 20-fold excess of ascorbic acid. After heating for 3 hours a fluorescent substance with RF about zero was obtained. The product was purified by elution in ethyl acetate on a silica plate and extraction with ethanol (RF = 0.17) to give 8.2 nmol of NBD-AHPE conjugate as determined by photometry (82% yield). The excitation and emission wavelengths were characteristic of amino-NBD fluorophore (absorbance maximum at 463 nm, excitation and emission maxima at 465 nm and 535 nm, respectively; LC-MS data: m/z= 590.2 [M-H]-, 626.2 [M+Cl]-).

In every case AHPE was found to localize favorably in active sites with binding energies comparable to those of endogenous ligands (Table 1). The 16-azido group did not contribute significantly to any binding mode although several possible donor-acceptor interactions were identified. The latter may include hydrogen bonding between the terminal nitrogen atom of AHPE and the hydroxyl group of Ser-109 of CYP21A2.

The relative calculated orientations of AHPE in active sites of CYP17A1 (Figures 2) and cholesterol oxidase (Figures 3) were found to be similar to the ones reported for endogenous ligands. 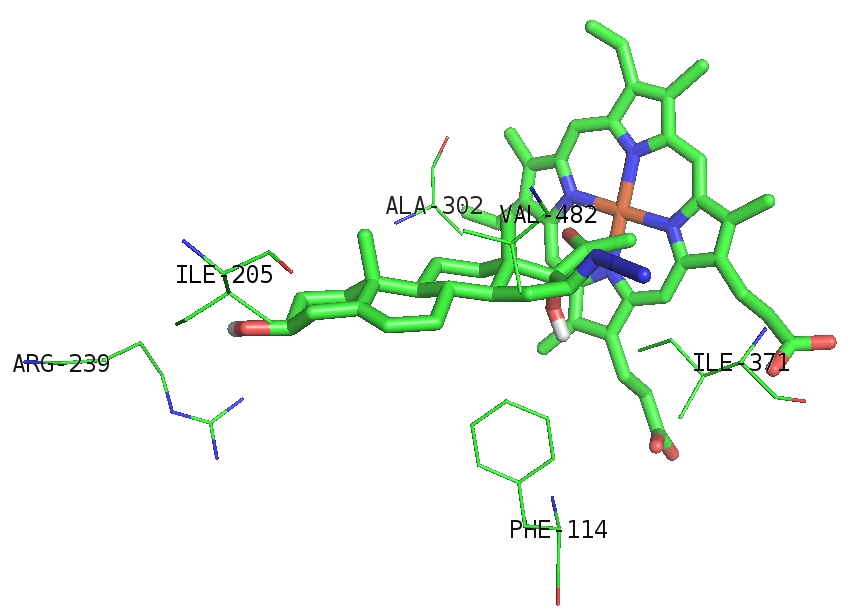 Figure 2: Computed localization of AHPE in the binding site of CYP17A1. Carbon backbones are displayed in green. Dark blue and red correspond to nitrogen and oxygen atoms, respectively. 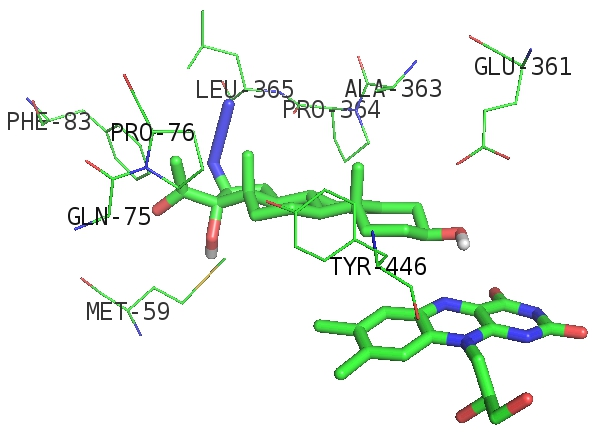 Figure 3: Side view of computed localization of AHPE in the active site of cholesterol oxidase. For atoms color map see capture to Figure 2

According to the results AHPE is a less suitable substrate for selected enzymes than reference compounds. In the case of cholesterol oxidase the chief reason for this appears to be high electron density due to carbonyl group of Pro-364 located next to azide group. No major steric hindrances appear to be involved. Similar structural relationships were observed by our group previously for fluorescent side chain-labeled cholesterols 22-NBD-cholesterol and 25-NBD-cholesterol [10], showing potential of artificial 3β-hydroxysteroids as substrates for cholesterol oxidases. In this work the postulate has been confirmed for AHPE in silico, indicating a prerequisite for experimental studies.

A 16β-azido pregnenolone derivative was prepared and characterized. It was predicted to interact with some enzymes involved in steroid bioconversions, namely CYP17A1, CYP21A2 and bacterial cholesterol oxidase. The fluorescent NBD triazole derivative of AHPE has been obtained using click chemistry approach. The results imply that AHPE is a promising artificial substrate for monitoring of human steroidogenesis and bacterial steroid catabolism.

The authors thank Prof. Dr. O. I. Shadyro and Dr. E. V. Grinyuk from the Faculty of Chemistry of Belarusian State University for providing the possibility to perform MS and IR experiments.