Sulfolobus solfataricus is an aerobic crenarchaeal hyperthermophile with optimum growth at temperatures greater than 80°C and pH 2 to 4. Within the crenarchaeal group of Sulfolobales, N-acetylglucosamine (GlcNAc) has been shown to be a component of exopolysaccharides, forming their biofilms, and of the N-glycan decorating some proteins. The metabolism of GlcNAc is still poorly understood in Archaea, and one approach to gaining additional information is through the identification and functional characterization of carbohydrate active enzymes (CAZymes) involved in the modification of GlcNAc. The screening of S. solfataricus extracts allowed the detection of a novel α-N-acetylglucosaminidase (α-GlcNAcase) activity, which has never been identified in Archaea Mass spectrometry analysis of the purified activity showed a protein encoded by the sso2901 gene. Interestingly, the purified recombinant enzyme, which was characterized in detail, revealed a novel de-N-acetylase activity specific for GlcNAc and derivatives. Thus, assays to identify an α-GlcNAcase found a GlcNAc de-N-acetylase instead. The α-GlcNAcase activity observed in S. solfataricus extracts did occur when SSO2901 was used in combination with an α-glucosidase. Furthermore, the inspection of the genomic context and the preliminary characterization of a putative glycosyltransferase immediately upstream of sso2901 (sso2900) suggest the involvement of these enzymes in the GlcNAc metabolism in S. solfataricusIMPORTANCE In this study, a preliminary screening of cellular extracts of S. solfataricus allowed the identification of an α-N-acetylglucosaminidase activity. However, the characterization of the corresponding recombinant enzyme revealed a novel GlcNAc de-N-acetylase, which, in cooperation with the α-glucosidase, catalyzed the hydrolysis of O-α-GlcNAc glycosides. In addition, we show that the product of a gene flanking the one encoding the de-N-acetylase is a putative glycosyltransferase, suggesting the involvement of the two enzymes in the metabolism of GlcNAc. The discovery and functional analysis of novel enzymatic activities involved in the modification of this essential sugar represent a powerful strategy to shed light on the physiology and metabolism of Archaea. 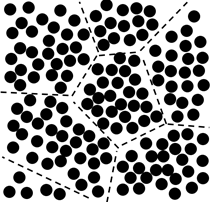