1 These authors contributed equally to this paper.

Objective: The aim of our research was to establish and evaluate bone mineral density (BMD)reference databases in women in Shandong’s coastal areas, that would be useful for diagnosis of osteoporosis(OP).

Methods: Thirty healthy women aged 25-35 years were selected and had their BMD measured respectively by two kinds of dual-energy X-ray absorption(DXA, Lunnar i, USA and Challenger, France) at skeletal regions of lumbar spine (L2, L3 and L4), left hip( femoral neck), and established the calibration equations between them. Compared BMD of women in Qingdao and Yantai which was calibrated before and after, eight kinds of regression models were fitted with age-related change. The best fitting model equations were found, and the reference database was established. Prevalence of osteopenia and OP were analyzed according to these databases.

Results: BMD of Challenger and Lunar i DXAs showed significant linear relationship. BMD after calibration in 4 skeletal regions changed with aging, and a cubic regression model was better fitted with aged-related change as compared with other regression models. BMD reference databases of women in Shandong’s coastal areas were established by cubic regression equation. The peak BMD appeared at 20-40 years old and followed by a linear decreasing after 40 years old. Females who had medical examination from 2010 to 2017, aged 50 to 89 were studied by these databases. It found that the prevalence of OP increased with age and lower than other cities. The morbidity of OP based on the database of Challenger DXA was more than that our database of Shandong’s coastal areas.

Conclusion: This study established the BMD reference databases for multiple skeletal regions of women in Shandong’s coastal areas that was the reliable reference standard for diagnosing of OP.

BMD, which is an important symbol of bone quality, can establish the diagnosis of OP before the first fracture has occurred[1,2]. BMD is affected by many factors, such as races, lifestyles, customs, territory, etc. Qingdao and Yantai，two large coastal cities in Shandong province, are close to each other. They have the similar latitude region, the amount of sunlight, lifestyle, dietary habits, diet structure, cultural background, dietary calcium intake and no difference of ethnic distribution. Therefore， there was no significant difference of BMD between the two district residents.  However, Bone mineral density instruments are different in these two cities ( Challenger DXAs in Qingdao and Lunar i in Yantai), and the different kinds of DXAs are the important factors, which may influence the detecting results of BMD. Hence, their BMD results or data are not comparable before calibration [3]. It must be calibration between different kinds of DXAs in order to keep the consistency of the results. It was reported in European to calibrate results of different kinds of DXAs using European spin phanton and one hundred healthy females at 20-80 years old，which was  costly and tedious work[4]. Chinese researches used body models or anthropomorphic lumbar spine models for this purpose. This measurement cannot cover the operating error of technician (such as position, interesting region) [5]. In our research, peak bone mass people were selected to calibrate between Lunar i and Challenger DXAs, that covered not only the instrument precision but also technicians operating errors and reflected the diagnostic value of OP. Through the calibration of different DXAs, the aim of this research was to establish the BMD reference database in Shandong's coastal areas, then we identified the rationality and practicality by comparing BMD databases differences of Yantai and Qingdao and laid  the foundation for accurate diagnosis and clinical observation of osteoporosis(OP).

All subjects were ruled out conditions or medications known to affect bone metabolism (such as chronic renal failure, hyperthyroidism and hyperparathyroidism, diabetes, various cancers, oophorectomy, those received diuretics, glucocorticoid and Calcium medicinal preparation). It excluded special occupation persons (such as athletes, the basement staff, etc.) and those staying in bed for three months.

Thirty healthy women at 25-35 years old were selected and had their BMD measured respectively by two kinds of DXAs (Challenger, France and Lunar i, USA) at skeletal regions of lumbar spine (L2, L3 and L4), left hip ( femoral neck). All subjects signed the written informed consents.

3274 citizens aged from 20 to 84 years old who come from Yantai were screened to establish BMD databases by Lunar i DXAs at Yuhuangding Hospital of Yantai  from 2010 to 2017. BMD databases of 3708 citizens who came from Qingdao scanned by Challenger DXA at Haici Hospital of Qingdao had been established[5].

When measuring BMD，each subject was positioned supine, and the physiological lumbar lordosis was flattened by elevation of the knees. Measurements in one city were performed and analyzed by the same person. Calibration and quality control were performed on a daily basis according to manufacturer's recommendation.

World Health Organization criteria[16] was used to categorize the scans as follows: T-score below or equal −2.5 indicated OP; between −2.5 and −1, osteopenia; and equal or greater than −1, normal bone density. T-scores were derived using the manufacturer's local population reference database. The coefficient of variation for the precision of BMD measurements at all sites was less than 1%.

All the data were analyzed with the SPSS 13.0. The results were expressed as Mean±SD. The comparison between two groups was conducted with the t test, a value of P<0.05 was accepted as significant statistically.

Cross-calibration of two types of DXAs

The datas of BMD at the lumbar spine (L2-L4) and left hip (femoral neck) which were measured by Challenger and Lunar i DXAs respectively for thirty females were shown in Table1. The results of DXAs (Lunar i in Yantai) were more than those of DXA(Challenger in Qingdao). It indicated that BMD data measured by different types of DXAs must correct before comparing them.

Table1  BMD of healthy females obtained from Challenger and Lunar i DXAs(g/cm2, ,n=30)

The regression equations and related coefficients of BMD at different bone regions are below. It’s shown that there was a significant linear correlation between the data of BMD by two kinds of DXAs.

Comparison of BMD reference databases between Yantai and Qingdao

BMD of healthy women of Yantai and Qingdao at the same bone area before cross-calibration were different significantly(P<0.01) in Table 2.

Table 2  BMD of health women from Yantai before cross-calibration(g/cm2, )

Table 3  BMD of health women from Yantai after cross-calibration(g/cm2, )

BMD data at the same bone area and age after cross-calibration were no significant difference (P>0.05). The results were shown in Table 3. It showed that BMD datas decreased gradually with the increasing age and had the rising trend at about 35 years old. It continued decreasing after 35 years old and decreased dramatically after 45 years old. 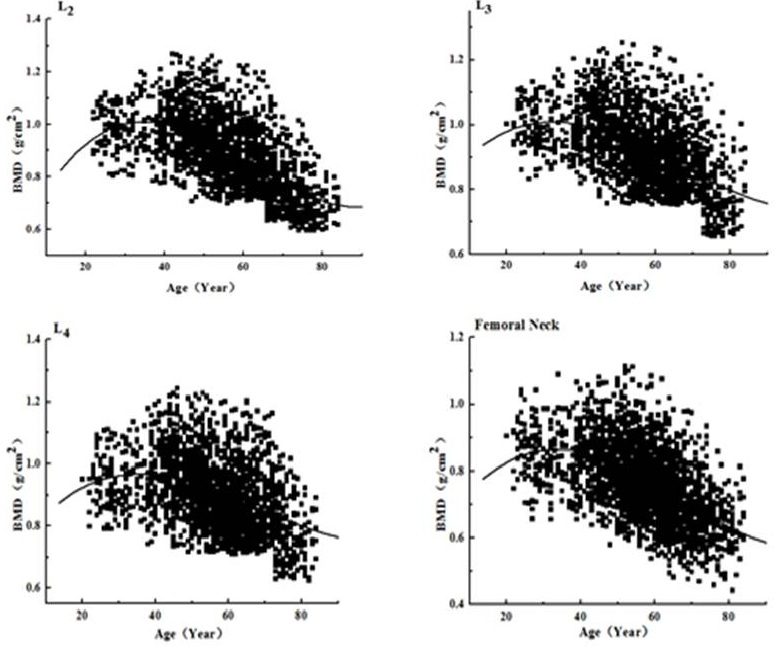 The diagnostic standard of osteopenia and OP are defined by the World Health Organization (WHO)  for women aged over 50 years[7]. The morbidity of OP at 4 skeletal regions were detected respectively by using BMD reference databases established in our study and self-provided database by Challenger in Table 4.

Table 4 Two databases comparison of morbidity of OP: established in our study (self-provided) (%)

The kinds of DXA in the world mainly have the Lunar, Hologic, Norland of America and Medilink, Challenger of French. The correction formula of the first three DXAs(Lunar, Hologic, Norland) had been established and widely used. However, there was no report about French DXA of Challenger and Medilink. This research aimed to establish the data conversion relationship of DXAs (Challenger in Qingdao district and Lunar i in Yantai district), which made it possible for these DXAs data’s shared. We selected 30 healthy women aged from 25 to 35 years old to scan respectively in the Challenger and Lunar i DXA, the measured data was used to do regression analysis and calculate the correction formula. The results showed the correlation coefficients of all skeletal regions were above 0.9, which indicated the obvious correlation.

The bone metabolism is affected by heredity, race, region, lifestyle, etc. There was no significant difference of BMD between peer group of the same ethnic and geographical environment[8,9], while the BMD data from different races cannot be shared. Recently almost all the laboratory used "Oriental" reference databases which were configured by imported instrument factory to diagnose OP, and the results of the accuracy and reliability were affected by them[10]. This research report provided BMD reference range in the Shandong’s coastal areas. This research selected 6982 healthy women including 3274 Yantai’s people and 3708 Qingdao’s people as samples, and they came from different districts and county-level cities. Because Yantai and Qingdao have the similar latitude region, the amount of sunlight, lifestyle, dietary habits, diet structure, cultural background, dietary calcium intake, and no difference of ethnic distribution, these factors determined there was no significant difference of BMD data to establish the database and it can be applied to the Shandong’s coastal areas. The research found that all peak bone mass of BMD occurred between the ages of 20-40 years old and the linear decrease began after 40 years. The main reason might be because estrogen levels of middle-aged and old women decline, especially after entering the menopause, lead to bone mass loss seriously and then BMD decrease[11,12].

The morbidity of OP and osteopenia at lumbar spine (L2-L4) and the left hip (femoral neck) were studied. The results showed that the prevalence of OP increased from 1.5-10.6% (40–59 years old) to 17.9-34.3% (80-89 years old). Tongqian zhang et al[13] discussed senior citizens suffered from OP in Lanzhou area to find that OP incidence reduced more than 80% after 70 years. Wenzhi wang et al[14] analyzed the prevalence rate of OP in middle-aged and aged people in Chengdu. The results showed that the OP incidence of lumbar spine and hip had basically reached 90% after 70 years and 100% after the age of 80 years. Zhihai zhang et al[15] surveyed aged-related prevalence of OP in Chinese women and the results showed that prevalence of OP was 21.75±5.96% after 50 years, and 76.74 ±5.28 at the age of 80-90. Above all, the prevalence of OP in the coastal areas of Shandong was lower than other domestic areas significantly, the main reason is that diet of coastal areas have a large number of seafood, which are rich in calcium. Calcium is important for building materials of bone.

Meanwhile, the research compared the database of Shandong’s coastal areas which established in our study with the Challenger DXA self-provided database and used them to diagnose the detection rate of OP in women of Yantai and Qingdao. The results showed that the morbidity of OP at lumbar spine (L2-L4) and the left hip (femoral neck) by the database of Challenger DXA were more than that by the database of Shandong’s coastal areas. The reason may be the local diet which has the richer calcium in seafood, and it made the local peak BMD higher than that of Challenger DXA self-provided. Considering the morbidity of OP by the reference databases in our study in group aged 80-89 years old，the difference was greater than any other groups, the reason is that of the amount of sunlight, lifestyle, dietary habits, diet structure, cultural background, dietary calcium intake than any other district. It’s said that the Challenger DXA self-provided database doesn’t apply to women of the coastal area. Through the research on the incidence of OP and osteopenia, it can be seen that BMD reference databases for multiple skeletal regions in women in Shandong’s coastal areas has strong applicability.

The study was funded by Medicine Science and Technology Development Plan of Shandong Province (2013ws0037).

We confirm that all experimental protocols were approved by Qingdao Medical University(License number:17856321). The methods were carried out in accordance with the relevant guidelines and regulations; Informed consent was obtained from all participants and their legal guardians.

Why the genomic LOCATION of individual SNPs is FUNCTIONAL?