Objective: The incidence of primary lung adenocarcinoma is increasing year by year in worldwide, and it has surpassed squamous cell carcinoma to become the most common pathological type of lung cancer. Advances in medical technology have made the overall survival rate of lung cancer patients improve, but it is still very low. In the study, we investigated the methyltransferase SETDB1 expression and the methylation level of SPG20, and analyzed the correlation and its clinical significance in the pathogenesis of lung adenocarcinoma.

Methods: 60 lung adenocarcinoma and normal lung tissues were selected.The expression of SPG20 and SETDB1 mRNA was examined by RT-qPCR; Protein expression of SPG20 and SETDB1 was determined by immunohistochemistry(SP) and immune protein imprinting(Western blot);Methylation level of SPG20 gene was determined by pyrosequencing. Correlation between SETDB1 and SPG20 methylation levels and both and clinical case characteristics was analysed by statistics. Western blot detection of SETDB1 and SPG20 protein expression in lung adenocarcinoma cells and normal bronchial mucosal epithelial cells.The small interfering RNA of SETDB1 was transfected into lung adenocarcinoma A549 cells by liposome-mediated method, the mRNA and protein expression levels of SETDB1 were detected by RT-qPCR and Wesrern blot, and the methylation level of SPG20 gene was detected by pyrosequencing.

Lung cancer is a common respiratory malignant tumor in the world, among which the patients with lung adenocarcinoma are increasing year by year, and now it has become the most common pathological type of lung cancer[1] [2]. The traditional treatment of lung adenocarcinoma mainly focuses on surgery and postoperative chemoradiotherapy. With the development of medicine, the molecular targeted therapy and immunotherapy of modern precision medicine have made great progress in the new treatment of lung adenocarcinoma[3].Spastic paraplegia-20 (SPG20) encodes a Spartin multifunctional protein, and its aberrant role in the cell division cycle is associated with tumorigenesis[4] [5] [6]. The methylation modification of SPG20 was found to be closely related with the proliferation, invasion and metastasis of various solid tumors. SET domain branch 1(SET domain bifurcated1, SETDBl) is an important family of histone methyltransferases, its function can catalyze the expression of a variety of genes repressed genes, which is closely related to a variety of tumors[7] [8]. It is rarely studied on the association of SETDB1 and SPG20 in the pathogenesis of lung adenocarcinoma at home and abroad。For that reason，we were planing to investigat the SETDB1 and SPG20 methylation levels in lung adenocarcinoma tissues，and explore the relevance of both patients and clinical significancein during the development of lung adenocarcinoma.

The RNA extraction kit extracted total tissue and cellular RNA. 300 ng RNA were applied to PrimeScriptTM RT Reagent kit and reverse transcribed according to the instructions. The expression of SPG20 and DNMT3b mRNA was detected using the SYBR Green qPCR Master fluorescence quantification kit, and the respective lead sequences are shown in Table 1. Relative expression level was calculated as２-ΔΔCt.

Tissues were sliced, xylene waxing, soaked in gradient alcohol, driplet with 3%H2O2 and placed at room temperature for 10min. Citrate buffer high temperature antigen repair after membrane breaking; Slice cooling then closed with goat serum . After washing, primary antibodies were placed in a wet box and incubated for 4℃ overnight. Secondary antibodies were incubated at room temperature for 30min. DBA coloration, then counterstained with hematoxylin.

Well-growing esophageal cancer A549 cells were selected, and the culture flask was gently shaken several times, suspended with debris floating on the cell surface, and then poured out together with the growth fluid and washed once with Hanks solution. Add 0.25% trypsin solution or trypsin-one EDTA digestion solution for 5ml from the cell-free face side, and flip the culture flask to immerse the digestion solution in the cells for about 1min. Flip the culture bottle and place it for 10min. In order to promote cell digestion, 37℃ of pre-warmed digestive solution can be added, or use the palm of the hand to the outer wall of the bottle with the cell surface, until the cell surface is observed by the naked eye. Pour out the digestive juice, and wash with 4.5ml of Hanks liquid along the opposite side of the cell layer. When washing, then turn the culture bottle gently, let the liquid flow slowly in the bottle, so as to wash off the digestive juice such as trypsin and digest after pouring off the trypsin. Add a right amount of newly prepared growth solution along the cell surface, wash the cells, and blow them several times to disperse the cells, and pass the culture at 1:2 or 1:3. In 37℃ culture, it can be adherent for about 30min after inoculation. The growth liquid can be changed for 48 hours. Generally, a monolayer can be formed for 3~4 days. The monolayer is formed, and then the maintenance liquid can be changed for testing.

Log-growth cells were taken and 0.25% trypsin digested to make cell suspension. After counting, cells were performed, seeded into 6-well culture plates, about 1×105 cells per well, adding F12 medium containing 10% FBS, and cells were incubated in a conventional incubator. Transfection was performed when the cell density reached 80% per well. After the cells were washed twice with serum-free F12 medium on the day of transfection, 1.5ml of serum-free F12 medium was added to each well and further starved into a cell incubation box for 4h before transfection. Dilute 1.25 μl 20μM siRNA of storage liquid (V2) with 30μl 1× riboFECT™ CP Buffer (V1), Gently mix well, Room temperature was incubated for 5min; Add the 3 μl riboFECT™ CP Reagent (V3), Gently blow well and mix well, Room temperature was incubated for 15min; The riboFECT™ CP mixture was added to 465.75 μl of cell culture medium (V4), Bring the total volume up to 500 μl, Gently mix well; The culture plates were incubated in a 37 ℃ CO2 incubation tank for 48h.

Data of the two comparing groups were analyzed by the Student’s t-test using the SPSS, version 21.0. Measurement data are expressed by the mean ± standard deviationand. The values less than 0.05 were considered statistically significant.

The results of immunohistochemistry experiments showed that SETDB1 was highly expressed in cancer tissues, with a positive expression rate of 81.67%, higher than 26.67% in normal lung tissue. SPG20 showed a low positive expression rate of 28.33%, lower than 61.67% in normal lung tissue. The difference was statistically significant.(P<0.05). Table.1, Fig.2

Table. 1 Expression levels of SETDB1 and SPG20 in cancerous and normal lung tissues（n, %） 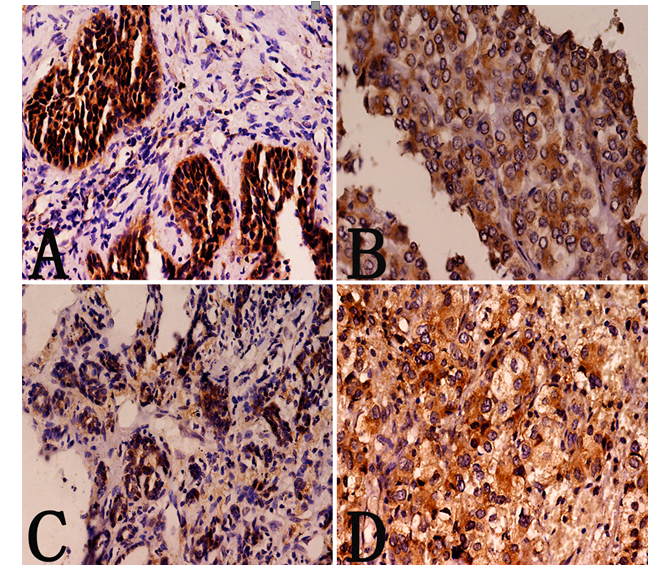 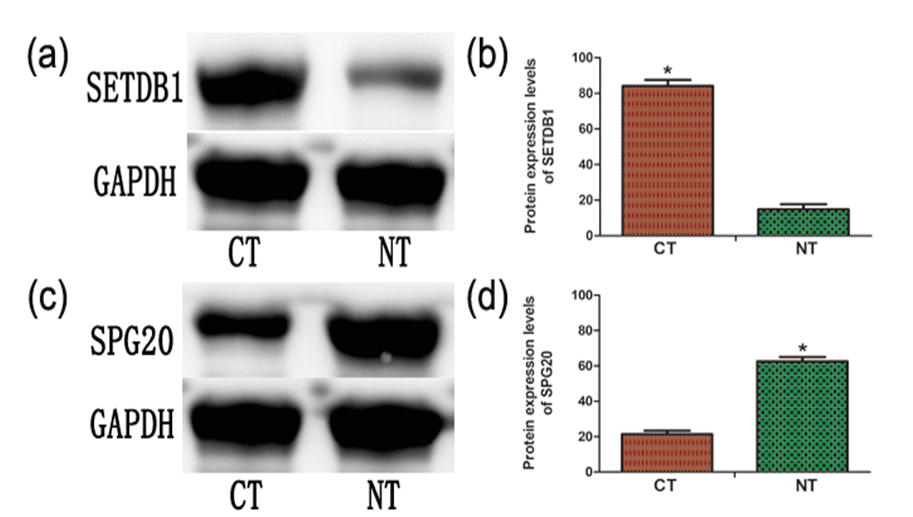 The result of SPGA20 methylation level in tissues by pyrosequencing showed that the methylation rate of SPG20 gene was (64.75±4.21%) in cancer tissues, which was significantly higher than that (15.36±2.57%) in normal lung tissue.The difference was statistically significant. (P<0.05) Fig.4 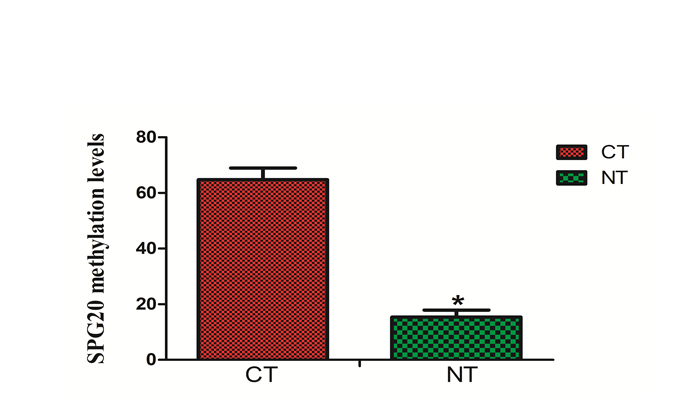 3.5. Correlation of SETDB1 and SPG20 methylation

Statistical analysis showed that SETDB1 and SPG20 methylation were correlated in cancer tissues, and the correlation coefficient r=0.642 (P<0.05).（Table.2）

Positive SETDB1 expression and SPG20 methylation were closely correlated with TNM stage, tissue differentiation, and lymph node metastasis (P<0.05), and not correlation with sex, age, and smoking(P>0.05). (Ta.3). Therefore, these results demonstrate that SETDB1 positive expression and SPG20 methylation are closely related to the malignancy degree and metastasis of lung adenocarcinoma.

The Western blot results showed that SETDB1 was highly expressed in A549 cells. However, the SPG20 showed a low expression level.SETDB1 expression was lower in normal bronchial epithelial cells, but SPG20 level showed a high expression(Fig.5).The expression levels of both proteins in the cell line were consistent with those expressed in the tissues.

Fig.5. The protein expression of SETDB1 and SPG20 protein in human lung adenocarcinoma A549 cells and normal bronchial cells

The result of Pyrosequencing showed that the SPG20 methylation level decreased significantly in si-S group, however, SPG20 methylation levels was no difference between the si-N and NC groups(P<0.05, Tab.4). The results of Western blot showed that the SPG20 protein expression in si-S group was higher than in si-N and NC group after RNA interference downregulated SETDB1.(P<0.05, Fig.7)

Table. 4 The SPG20 methylation rate in each experimental group cells after interference with SETDB1（%）

It was shown that the abnormal expression of methyltransferases was found to be associated with their abnormal methylation, and it is involved in the proliferation, invasion, and metastasis of various tumors [19-22].The SET domain clade-type 1 (SETDB1) is a member of the histone methyltransferases family, displaying multiple functional in biological networks involved in transcriptional repression and autosomal gene silencing[23].SETDB1 has a variety of biological functions including regulating the growth and proliferation of embryonic stem cells and regulating mouse cartilage development[24].Recent studies have found that SETDB1 is upregulated in various human cancers, such as colon cancer [25], liver cancer [26], gastric cancer [27], lung cancer [28], breast cancer [29], etc., which is closely related to the degree of malignancy and metastasis of tumors.Xiao[30] et al found that SETDB1 was amplified and highly expressed in breast cancer tissues, and that silencing SETDB1 inhibited the formation of adherent-dependent foci in breast cancer cells. This suggests that SETDB1 may be one of the potential oncogenic drivers in breast cancer, and that its high expression state promotes breast cancer initiation and development. Na[30] et al found that low expression of SETDB1 inhibited tumor growth in tumor cells and nude mouse models, while its overexpression increased tumor aggressiveness, and SETDB1 overexpression was associated with enhanced sensitivity to tinomycin-mediated growth inhibition.In this study, SETDB1 levels were measured in lung adenocarcinoma by immunohistochemistry and protein immunoblotting, which showed positive SETDB1 expression in cancer tissues and was significantly different from normal lung tissues.The statistical analysis results are shown that the expression level of SETDB1 was closely related to the TNM stage, tissue differentiation degree and lymph node metastasis of lung adenocarcinoma; The positive expression of SETDB1 increased with the increase of TNM stage and cancer tissue differentiation of lung adenocarcinoma, and the positive expression of lymph node metastasis was increased significantly, which obviously played the role of "promoting cancer".This is consistent with foreign studies, which the high expression status of SETDB1 in NSCLC lung cancer tissues, which has a strong correlation with lung cancer [30].

All authors read and approved the fnal manuscript.

This work was supported by Natural Science Foundation of Hebei Province (Project No.: H2021406045)，Chengde City Science and Technology Research and Development Plan Project (Project No.: 201904A029)

Availability of data and materials

The data included in this investigation are available from the corresponding author.

Ethics approval and consent to participate

All experimental protocols were implemented following the Guide for the Care and Use of Laboratory Animals of the National Institutes of Health (NIH Publication No. 85-23, revised 1996) and were approved by the Ethics Committee of Affiliated Hospital of Chengde Medical University

The authors declare that they have no competing interests.