Functional neuroimaging plays more and more important roles in seizure localization(Calcagni et al., 2002). Ictal single-photon emission computed tomography (SPECT) could capture the abnormal regional cerebral blood flow (rCBF) perfusions when the imaging agent is intravenously injected during seizures. It can be used to localize the epileptogenic zone noninvasively and is particularly useful in MR-negative epilepsy(Van Paesschen, 2004). Although the clinical value of ictal SPECT for presurgical evaluation has been admitted, truly ictal SPECT studies are not routinely performed owing to technical difficulties. Ictal SPECT brain images are obtained by injecting technetium-99m ethyl cysteinate dimer (99mTc-ECD) within 30 s after clinical signs and/or typical EEG discharges are recognized. Therefore, the best way for obtaining ictal brain SPECT is provoking seizures pharmacologically as for example with pentylenetetrazol, etomidate, etc (Pastor et al., 2008). The objective of this study was to investigate the feasibility and clinical value of clonidine and sleep deprivation for provoking ictal brain SPECT in patients with epilepsy.

The experimental protocol was approved by the Ethics Committee of Lanzhou University Second Hospital. After obtaining informed consent in writing, each patient was deprived of sleep for 24 h, and given oral application of clonidine. Clonidine doses were adjusted to body weight accordingly (150 ug for body weight<60 kg; 225 ug for 60–80 kg; 300 ug for>80 kg) (Kettenmann et al., 2005). A line was inserted into the antecubital vein and were monitored by video-EEG. Monitoring of blood pressure and heart rate was performed every 30 min up to 180 min after oral administration of the drug. 740MBq of 99mTc-ECD was intravenously injected within 30 s by a trained EEG technician after clinical signs and/or typical EEG discharges were recognized. The injection time was determined from the seizure onset to the completion of tracer injection. Based on analysis of the video-EEG recordings, the injection was performed within 30 s in all cases, then brain SPECT scans were performed 30 min after the injection of 99mTc-ECD, while lying supine in a dimly lit room with eyes closed  using a single-head gamma camera system equipped with low-energy high-resolution collimators (E.CAM, Siemens Erlangen, Germany). The acquisition parameters included: a rotational radius of 15 cm, a 15% energy window centered on 140 KeV, an acquisition time of 25 s per projection, and a 128x128 matrix.

SPECT images evaluation were analyzed by two experienced doctors independently through visual analysis, and the disagreements were resolved through discussion with a third doctor.

Patients in the two groups were monitored by Video-EEG for 8 h in the Epilepsy Centre and the results were presented in table 1. Thirty-nine/52 patients (75%) provoked by clonidine and sleep deprivation presented typical EEG discharges between 1 and 2 h after oral application of clonidine, and 3 patients with clinical seizures, which were confirmed that the provoked seizure was the same as his or her habitual fit. In patients deprived of sleep only, 38.3% (18/47) patients show abnormal discharges, and in whom 4 patients experience clinical signs. Most importantly, the appearance of abnormalities provoked by deprivation of sleep only are not predictable. 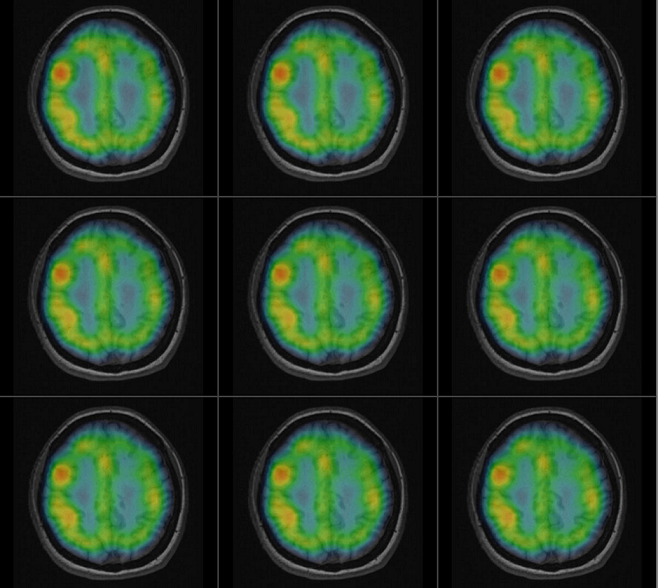 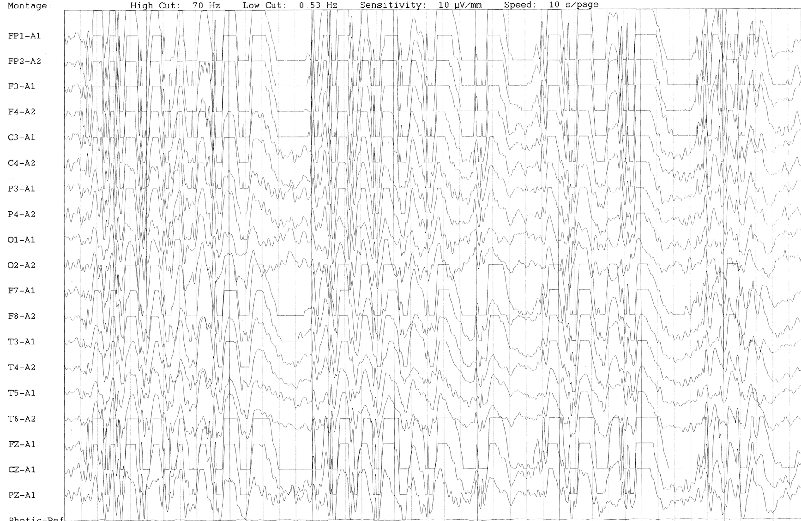 Fig.2.The fusion imaging showed hyperperfusion in the right frontal lobe. MRI of the patient was negative.

30/39 patients (76.9%) underwent MRI scan with the aim of identifying structural lesions. Only 6 patients showed anatomical lesions, of whom 1 patient had temporal atrophy, which was consistent with ictal SPECT.

Ictal brain SPECT was performed in study patients provoked successfully by clonidine and deprivation of sleep. SPSS10.0 software was used to compare the provoked seizures by Chi-square test between study and control group, and the abnormalities were 75.0% and 38.3% respectively. The difference had statistical significance (c2=13.614, P=0.000<0.05). Besides, the difference of clinical seizures between the two groups had no statistical significance (2=1.253, P=0.263>0.05).

The precondition for a successful epilepsy surgery largely depends on the accurate localization of epileptogenic zones(la Fougere et al., 2009). Although advances in structural and functional MRI allow for identification of subtle lesions, 20-30% of patients with temporal epilepsy and 20-40% of those with extratemporal epilepsy have no clear lesion on MRI, even if it shows focal lesions, which are different from epileptic seizures at times.

SPECT is the only modality practically suited for imaging brain activity changes during an actual seizure(Knowlton, 2006). Ictal SPECT has been proved to be significantly more sensitive and specific than interictal SPECT. It is clinically useful in the definition of the epileptogenic zone(Oliveira et al., 1999). Researchers agree that the approach to obtain an ictal SPECT is injecting 99mTc-ECD within 30 s when clinical signs and/or typical EEG discharges are recognized, because early ictal SPECT injections minimize the problem of seizure propagation. At present, the most common method to obtain ictal SPECT is to inject the tracer as soon as possible during Video-EEG monitoring, which is usually provoked by deprivation of sleep. This study showed that the reported method is not predictable. Furthermore, the provoked rate is low (38.3% in present study), all of them will increase the difficulty to obtain truly ictal SPECT by deprivation of sleep.

There were reports concerning clonidine induced spike or sharp-wave activity which indicated that seizures provoked by pharmacological means are identical to the patient's habitual seizures in their focus of onset(Kirchberger et al., 1998; Schmitt et al., 1999; Scaramuzza et al., 2000; Kettenmann et al., 2005; Feron et al., 2008). It is accepted that sleep can increase the chance of discharges. Therefore, the study combined with sleep deprivation to provoke seizures as to obtain ictal brain SPECT in epileptic patients. 75% patients were provoked successfully by clonidine in combination with sleep deprivation and 38.3% by deprivation of sleep only. The difference displayed statistical significance (c2=13.614 P=0.000<0.05), however, there was no statistical difference in clinic seizures between the two groups ( c2=1.253,P=0.263>0.05), which showed that clonidine as a spike inducing agent is safe and effective. The EEG abnormalities appeared between 1 and 2 h after oral application of clonidine, which may be associated with the maximum plasma concentration. The results of this study are consistent with those of Kettenmann et al4. Monitoring of blood pressure and heart rate was performed every 30 min up to 180 min, after oral administration of the drug, and no side-effects were found with the exception of five patients who noted dry mouth around 30 min after clonidine administration. Therefore, using this feasible procedure, it was possible to localize the focus, and to avoid the limitations due to the unpredictability of seizures, so as to avoid late injection. In this study, 39 patients were injected 99mTc-ECD less than 30 s, and the localization of ictal SPECT was 94.9%, and 95% of these patients showed single hyperperfusion. It is reported that drug-resistant epileptic patients with single hyperperfusion, which is concordant with the site of surgical resection was an independent predictor of seizure-free outcomes(Brinkmann et al., 2000). In particular, the hypo-hyperperfusion pattern may help in identifying the epileptogenic zone.

MRI showed anatomical lesions in 6/30 patients (20%), this also confirmed that functional neuroimaging was superior to MRI for seizure localization. Then, the effectiveness of provoked SPECT was confirmed by comparison with video-EEG data in patients with partial seizures. There was agreement between ictal SPECT and video-EEG monitoring in 19/23 partial epilepsy patients (82.6%). Thomas et al reported that it was possible to obtain localization in patients with normal MRI using a combination of EEG patterns and an ictal SPECT study(Thomas et al., 2002).

This study revealed that clonidine and sleep deprivation were useful in obtaining ictal SPECT. They greatly increased the probability of recording ictal and interictal epileptic activity during limited acquisition time, which gave the opportunity to inject 99mTc-ECD within 30 s to obtain truly ictal SPECT. It mainly provoked subclinical seizures, a type of seizure in which an EEG trace will show abnormal brain activity, but which does not present any noticeable clinical signs. The study proved clonidine and sleep deprivation can be considered as another safe and effective method in obtaining ictal brain SPECT. However, there were three main limitations in the study. 1) Because of clinical reasons, the control subjects were not matched to the study patients, especially in terms of the types of epilepsy, nor were the subjects in this study randomized to either group. The study patients had more generalized tonic-clonic seizures and absence seizures than the control group, which may influence the results of provoked discharges; 2) The SPECT study interpreters were not blinded to other clinical information; 3) Firstly diagnosed epilepsy patients were selected to test the feasibility of the method in this pilot study. Patients in the two groups were monitored by Video-EEG for 8 h. It is accepted as the most accurate method to validate the localizing value of SPECT scans is intracranial electrode studies, and/or the results of epilepsy surgery. However, no subjects in this pilot study underwent the epilepsy surgery. Therefore, further studies are required.

The study suggested that when the results of patients who presented ambiguous or unexpected findings on the first ictal SPECT study, repeated ictal SPECT was useful. This could yield additional information concerning the epileptogenic zones and provide confirmation as to whether the epilepsy was of multifocal origin (Lee et al., 2002).

Accurately localizing the seizure focus is a complex work for patients with intractable epilepsy, which is strongly related to surgical outcome. So far, no single technique appears clearly superior overall to any of the others, and multimodal approaches are concerned primarily because epileptogenic zone is verified only in case of the concordance of different imaging modalities. Therefore, although ictal SPECT is capable of demonstrating ictal neural activation and is a noninvasive marker of the ictal onset zone, combining it with other investigation tools for seizure localization is imperative.

In conclusion, oral administration of clonidine combined with sleep deprivation increased the probability of the recording of epileptic activity during limited acquisition time. Therefore, clonidine and sleep deprivation should be considered as more effective diagnostic approach for obtaining ictal brain SPECT in patients with epilepsy.

This work was supported by the Lanzhou University Second Hospital Cuiying Youth Fund of China (CY-NQ-02). We also would like to thank Mr. Wei Jia in Beijing Crealife Technology Co. Ltd for imaging fusion processing.

Why the genomic LOCATION of individual SNPs is FUNCTIONAL?