The manna is a product obtained from the elaborate sap solidification that comes out from the incisions made on the stem of some species of the genus Fraxinus L. In this study, we have analyzed 12 samples of manna to determine the chemical composition. Twenty elements (Al, As, Ba, Cd, Co, Cr, Cu, Fe, Li, Mn, Mo, Ni, Pb, Rb, Sb, Se, Sr, U, V, Zn) were determined using an Inductively Coupled Plasma Mass Spectrometer. The results show that the most abundant elements are Fe > Rb > Al > Cu > Ba > Zn > Sr with median concentrations in the range of 0.9 – 10mg kg-1. The remaining elements exhibit median concentrations in the range of 0.0003 -0.5  mg kg-1. The manna also can be considered as good sources of essential elements for subjects with diseases related to diabetes. Moreover, the manna could be recommended for a daily diet.

The term manna describes a broad and heterogeneous class of sugars, white or pale yellow. It is obtained from the elaborate sap solidification that comes out, during the summer season, from the incisions made on the stem of some species of the genus Fraxinus L. [1-2]. This exudate is employed as a sweetening ingredient in a range of local foods [3], and it is also used in toiletries, for its emollient properties. Manna is produced in locations with a precise pedoclimatic environment characterized by dry, hot periods and constantly ventilated during summertime. These conditions are mandatory to obtain the complete drying of the sap that gushes from cuttings made by hand on the bark. (Italy), where traditional production methods are still in place, the final product is collected and processed by various local consortia, and then distributed worldwide to food, pharmaceutical and herbal companies. Fraxinus manna is available both as a powder or as cylindrical fragments of various sizes. The Fraxinus species have economical, commercial and medicinal importance [4-6]. However, the description and the scientific validation of Fraxinus manna is still scarce, and little or no attention has been paid to its chemical composition. This suggests us to carry out a determination of the chemical composition of manna, which is vastly used and produced in Sicily. From the literature, there are several works concerning the organic component and the major elements of the manna [7-9]. The aim of the present work is to give a preliminary investigation of trace element contents in manna samples. Its commercial value has been rediscovered in recent years and it finds useful in various fields, from the confectionery industry to the pharmaceutical and, therefore, the possibility of evaluating its possible nutritional intake.

Currently, the production of manna is based on some cultivars afferent predominantly to Fraxinus angustifolia subsp. oxycarpa (M. Bieb. ex Willd.) Franco & Rocha Afonso. From the cultivars found (“verdello”), it was possible to obtain manna samples on which chemical analyses were conducted. The "verdello" is distinguished by the dense foliage and a beautiful deep green color, a characteristic that has determined its name. This cultivar is characterized by rapid growth and early production at the beginning of the summer period. The product is of excellent quality, with a prevalence of cannolo on the manna in scrap [7]. Within the madonita area, the region interested in the manna production is located in the northern slope overlooking the Tyrrhenian Sea, between the sea level and the territories of Pollina, Castelbuono and, more marginally, the municipalities of Cefalù, Geraci Siculo and San Mauro Castelverde. From the geological point of view, it is a very diversified territory characterized by flyschoid and calcareous substrates.

Samples of F. angustifolia manna were collected from Madonie mountains at the end of July 2018 from different producers operating near Pollina and Castelbuono (Palermo, Italy) (Figure 1). The exudate was collected all day long on nylon wires applied to cuttings made on the trunk with a knife. The dripping sap was, then, let dry at open air during daytime, then gathered before dusk by manual removal from the wire. The shape of the samples (named “cannoli”) was cylindrical, and their color ranged from white to pale yellow. The samples of manna were, immediately after collection, stored in the refrigerator at a temperature of 4° C to preserve the chemical characteristics before the analysis. 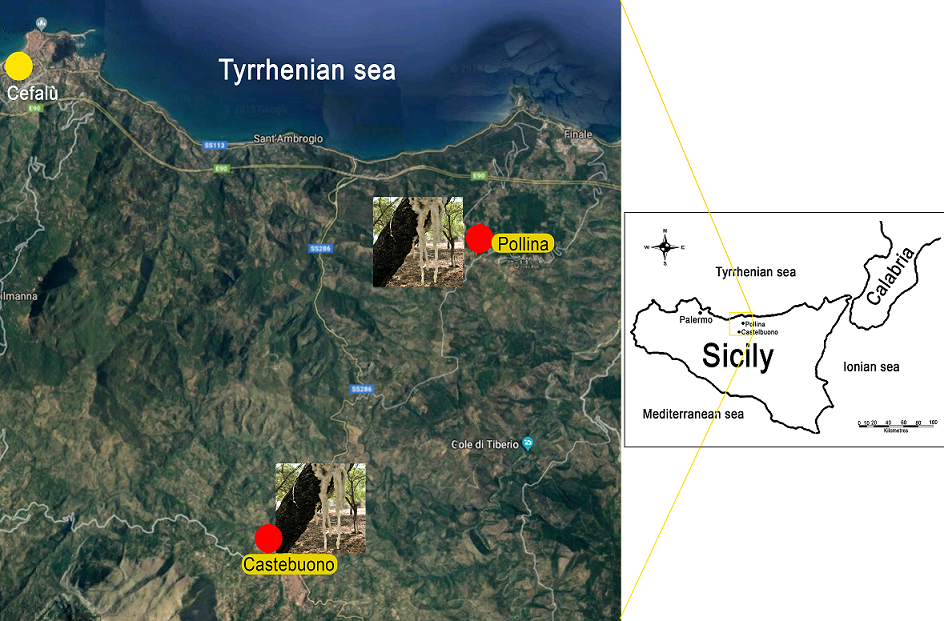 Before the analysis, the samples were dried in an oven at a temperature of 60° C for 24 hours. After that, the dried manna was powdered and kept in polyethylene bags under dry conditions. Powdered manna (~0.800 g) were digested with a mixture of 5 ml of 65% HNO3 (Suprapure, Merck, Germany) and 2.5 ml of 33% H2O2. The digest was diluted to 15 ml using deionized water (18 Ωm). Twenty elements (Al, As, Ba, Cd, Co, Cr, Cu, Fe, Li, Mn, Mo, Ni, Pb, Rb, Sb, Se, Sr, U, V, Zn) were determined using an Inductively Coupled Plasma Mass Spectrometer Elan 6100 DRC-e (PerkinElmer). Isotopes of 45Sc, 89Y and 186Re prepared from individual solutions with contents of 1000 were applied as internal standards in order to effectively correct random variations in signal intensity (ICP Standard CertiPUR, Merck, Germany). For As, Cr, Fe, Se and V, the ICP-MS was operated in DRC (Dynamic Reaction Cell) mode with CH4 as the reaction gas. All standard solutions were prepared with ultra-pure deionized water (18 Ωm) and reagent-grade chemicals (ICP Multi-Element Standard Solution XXI CertiPUR – Merck and Mo and Sb CertiPUR Standards – Merck). Calibration curves ranging from 0.05μg L-1 to 500μg L-1 were constructed. To minimize matrix effects, the standard addition technique was used for all determinations. Sample blanks were also analyzed, and the operational detection limit for each element was calculated as the standard deviation ×3 of the analyte concentration in blank samples. The validity of the analytical procedure was checked by the standard reference material SRM1515 (apple leaves) by NIST. The metal recovery rates of certified elements in the reference material ranged between 94% and 111% (Table 1).

Aluminum is a typical crustal element and is considered ubiquitary in the environment. The abundance of aluminum in manna samples is due at the geological composition of the soil where the plant grows. Rubidium is an element typically crustal. Until today it has no known biological role, though, some evidence suggests that this element serves as a transporter across defective cell membranes, especially in cells associated with aging [10], probably because it has chemical characteristic similar to potassium. This similar chemical characteristics facilitate the plant’s absorption of rubidium and its entry into the food chain and so contributes to a daily intake of between 1 and 5mg.

The higher concentrations of strontium are linked to the chemical composition of the substrate. This element has a similar property to calcium but isn’t between essential elements. About 99% of the strontium in the human body is concentrated in the bones.

Figure 2 shows the boxplot for all elements analyzed reported in order of abundance, displaying the distribution of data , The variability was also observed by the coefficients of variation calculated as CV=(Std.Dev.)/Mean×100 ranging from 11% (Se) to 94% (Sb). Arsenic, chromium, selenium and uranium show the lowest values CVs (< 35%) reflecting their non-use in biological processes and the low concentration of these elements in the growth soil [11].. The other elements show intermediate and higher CVs, linked to the lithology of the surrounding rocks and the essential role they play for the plant. 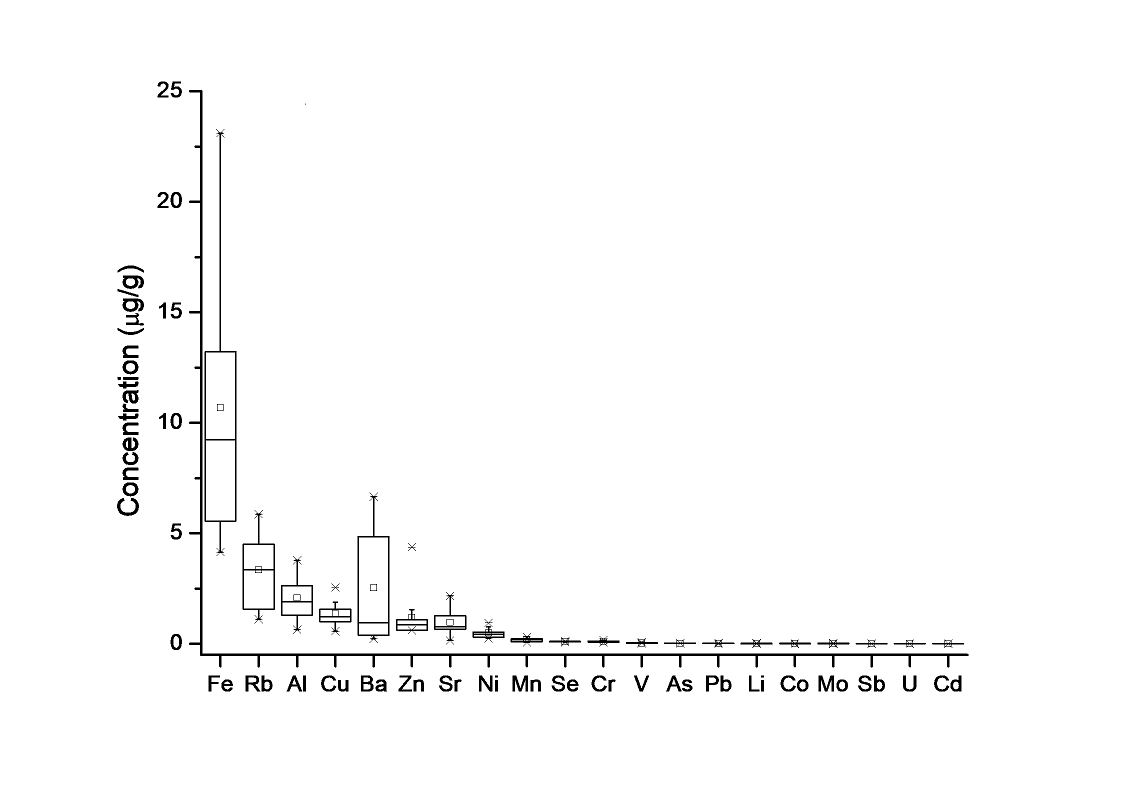 In recent years the manna has found a new impetus in the use of the confectionery and culinary industry as well as pharmaceutical, for its antioxidant, depurative and low glucose and fructose content. Manna is a natural sweetener indicate for people with diabetes and during diets. Moreover, the manna is an excellent detoxifying product, especially for the purification of the liver and epidermis [7].

Beneficial effects of manna are also related to the significant presence of copper. It is involved in the activity of many enzymes and metabolic functions [13]. This metal stimulates and potentiates the absorption of iron from food and, together with iron, plays a role in making red blood cells and maintaining nerve cells and the immune system. The Cu levels in samples are similar to an egg (0.1mg), cheese (0.1mg), salmon (0.1mg), tuna (0.1mg), pork, roast and bacon (0.1mg), several fruits (apricot-0.1mg; orange -0.1mg; grapes black and white-0.1mg; strawberry-0.1mg) and vegetable (asparagus-0.1mg; pepper- 0.1mg; carrot-0.1mg; tomato-0.1mg; onions 0.1mg) for 100g of product. In Europe, there is no recommendation the intake for copper, but the U.S.A. have been evaluated an intake of 2 to 3 milligrams per day for adults (http://apjcn.nhri.org.tw/server/info/books-phds/books/foodfacts/html/data/data5i.html).

Zinc is an essential trace element and plays an important role in various cellular processes including normal growth, brain development, behavioral response, bone formation and wound healing [14-15]. It can be beneficial in the treatment of viral infections, rheumatoid arthritis, healing of wounds, acne, eczema, and stress [16]. It also acts against free radical damage slowing the aging process [16]. The dietary requirement must take into account the different degree of availability of zinc in different foods. Animal products are more efficient sources compared with cereals. The recommended dietary intake for zinc is 12 – 15mg for adults, assumes that the zinc comes from mixed animal and plant sources. The intake of zinc to the diet is comparable to that of various fruits (cantaloupe-0.1mg; apricot-0.1mg; apple-0.1mg) and vegetables (asparagus-0.1mg; mushroom-0.1mg; onion-0.1mg; celery-0.1mg) (http://apjcn.nhri.org.tw/server/info/books-phds/books/foodfacts/html/data/data5j.html).

From a commercial standpoint, manna can provide adequate profits and it finds useful in various fields, from the confectionery industry to the pharmaceutical one, passing through the herbal, cosmetic and dietetic sector. It is a natural sweetener with a low glucose and fructose content, suitable for people with diabetes as it does not alter the blood glucose level. The manna also can be considered as good sources of essential elements in particular iron, rubidium, strontium, copper and zinc for subjects with diseases related to diabetes. In general, the manna could be recommended for daily diet, but currently, the studies are reduced, and it is hard to define a correct dose of intake the human body to avoid adverse effects. From this preliminary study on the content of trace elements in manna highlights the need to implement these types of studies supporting both the development of adequate quality control protocols and the careful evaluation of its potential health benefits.

This work was supported by Miur (funds FFR2018, D. Varrica). The authors wish to thank Mr. Mario Cicero for his invaluable information on how to harvest the manna.