Background : Most researchers recognize and account for annual and seasonal turnover of herbaceous vegetation in sampling protocols, but few have evaluated and quantified these effects and even fewer have evaluated these effects in hybrid ecosystems. We analyzed annual and seasonal turnover in herbaceous vegetation diversity in grassland reserves, ditches, and field margins in northwest, Ohio.

Conclusion: Because there is annual and seasonal turnover in species composition, sampling herbaceous vegetation should occur across multi-years and during multi-seasonal sampling bouts to characterize diversity in an ecosystem. Highest diversity levels occurred during the summer (June to July) and could be used to maximize sampling efficiency.

Human activities have fundamentally altered global ecology and resulted in novel sets of environmental conditions for most species, which ecologists refer to as either hybrid or novel ecosystems [1]. Hybrid ecosystems are ecosystems with community compositions that retain historic characteristics, but also contain community assemblages and species compositions not historically present [2]. Novel ecosystems are a special case of hybrid ecosystems that have been severely impacted, have no natural or historic analog, and the system cannot likely be restored to historic conditions [2-3]. Because few contemporary landscapes have not experienced substantial anthropogenic activity, hybrid and novel ecosystems are becoming the dominant ecological feature on the landscape and are becoming increasingly important in applied ecology and conservation [2, 4].

A common characteristic in grassland communities is seasonal turnover of herbaceous vegetation. Thus, the species composition in the spring is different than species composition later in the growing season [9-11]. Therefore, the determination of community assemblage at a site may be conditioned upon the time of year that sampling occurs. Nonnative species take advantage of these varying life history traits when colonizing and, as a result, species seasonal turnover at a site might be contributing factor for the invasiveness of some non-native species [12]. The presence of nonnative species in hybrid and novel ecosystems exacerbates seasonal turnover of community assemblages [9-10]. In addition, sampling season may influence the determination of the invasiveness of the system based on the community dynamics and growing season of native and nonnative members of the local herbaceous vegetation community.

In recognition of this phenomena in dynamic grassland communities, most researchers will characterize diversity in ecosystems by sampling across years to account for year to year variation in plant detection and environmental conditions [13] or across seasons to account for seasonal variation in species turnover [9-11]. On the other hand, managers may not account for these annual and seasonal effects due to time constraints or limited sampling ability. Consequently, this could have ramifications on how a natural area is managed. While annual and seasonal turnover is widely understood, few have evaluated and quantified these effects, and even fewer have quantified these effects in hybrid ecosystems (i.e. the types of systems most likely to be targeted for restoration and active management). In this paper we seek to 1) quantify the degree to which herbaceous vegetation varies annually and seasonally, and 2) provide best sampling practices to maximize vegetation diversity detection. 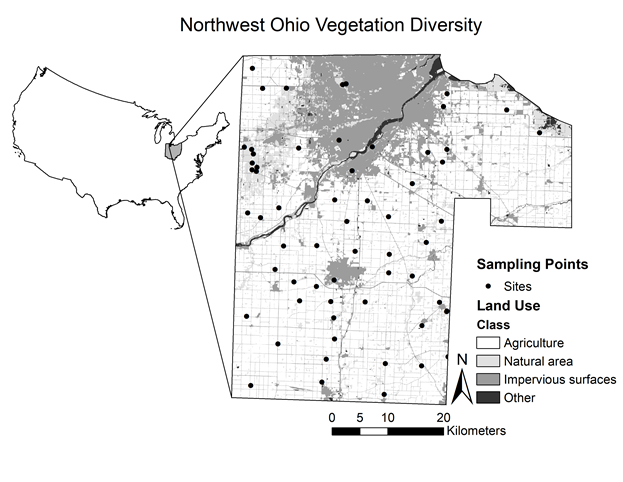 Figure 1. Locations of the 61 sampling sites in Lucas and Wood Counties in Ohio, USA.

We assessed vegetation diversity of ditch sites along two, 10-meter transects each placed at a 20º angle from the bottom of either side of the ditch. Due to concerns regarding sampling disturbance in ground nesting bird habitat in reserves, we modified reserve site sampling to one 10-meter transect at a random bearing from a randomly selected set of GPS coordinates chosen within each grassland patch of the reserve (Karen Menard, Stewardship Supervisor of Metroparks Toledo personal communication). We used the point-intercept count method to index vegetation species presence every 0.25 meters along each transect [14].

We defined native diversity as defined by the Ohio Invasive Plants Council as species that were documented in the region prior to 1800. Species that did not fit this requirement were deemed nonnative [15; Supplementary File 1]. Species with no conclusive native or nonnative classification were excluded from the analysis (N = 1).

To compare year to year variation, we used a z-test to test significant deviation from one (complete similarity) to see if species assemblages differ between years using the PASWR package (Arnholt 2012) in R (version 3.4, R Core Team, Vienna, AT). For seasonal variation, we used a repeated measures ANOVA to compare similarity measures between sites from Spring to Summer, Summer to Fall, and Spring to Fall. We calculated a linear mixed model using package nlme (Pinheiro and Bates 2017) in R and used ANOVA to obtain the repeated measures ANVOA results. We used post hoc paired t-tests to test for significant differences among paired sampling periods. We compared seasonal variation for 2016 and 2017 in a separate analyses.

Our data suggest on average only about 25% of the species recorded at a site were present both years sampled. Although similarity is low between years, this can be attributed to the increase in total diversity, specifically the number of species, during the last year (61 species). The observed increase in diversity from 2016 to 2017, or turnover in diversity among years could be driven by climatic variations (e.g., temperature and precipitation) [11, 17] and phenological and life form classification (e.g., perennial, biennial, and annual) differences among species [11, 18]. Specifically, Schultz et al. [11] observed that drought conditions in one year resulted in lower site diversity and delayed phenological events >1 growing year after the observed drought period. Although we did not specifically measure precipitation during our study, we did have significantly more rainfall during the second year of our study and observed higher native species community composition during the 2017 field season.

Although the similarities among the seasons were not significant in 2016, seasonal site similarity was very low. Between Spring and Summer only 20% of the species were the same and only 24% were the same between Summer and Fall. Similarities were even lower when comparing Spring to Fall. Seasonal turnover in 2017 was significant and, like 2016, was low. Between Spring and Summer only 20% of the species were present in both seasons and 34% of the species were present in Summer and Fall. Similar to 2016, the lowest similarity was between Spring and Fall. As a result, there is likely high species turnover occurring during the Summer (June to July). This can be partially attributed to phenological differences of germination and senescence [11, 18] and the amount of system-wide disturbance. In northwest Ohio, disturbance in ditches and field margins can almost solely be attributed to frequent mowing by Ohio Department of Transportation. This influences species composition because only species adapted to frequent disturbance can survive. Moreover, mowing influences species detection depending on the timing of the survey related to the timing of mowing.

While we detected low similarities in diversity across years, further research beyond two years may confirm the influence of climatic and phenological variations on inter-annual diversity [11]. Also, while we fully characterized diversity at our sites, we did not conduct exhaustive searches. Species may have been missed that did not occur along the sampling transect or were too young to be accurately identified to the species level.

Because of the observed inter-annual and seasonal variability of hybrid ecosystems, sampling efforts to characterize diversity should be determined by management goals; thus, defining when and how frequently to sample each site. Hybrid ecosystems, specifically the ditch network, in northwest Ohio are a highly interconnected network. If the goal was to characterize diversity of the hybrid ecosystems as a whole, sampling should occur across multiple years and seasons, but each site may only need to be sampled once. On the other hand, ditches are privately and publically owned and, while ditches are physically connected they are not functionally connected [4], each ditch should be treated as its own hybrid ecosystem. Therefore, each site should be sampled across multiple years and seasons.

Failing to account for inter-annual and seasonal variability could bias results and lead to the mismanagement of hybrid ecosystems. Multiple sampling year effort is advised regardless of the number of sampling periods used as sampling all sites and characterizing the entire system in 2016 could account for a downward bias of up to 31% or in this case missing 61 total species (23% or 46 species for 2017). Therefore, if the goal is to characterize diversity on a site by site basis and happens to occur in a dry year, diversity may be underrepresented. Given that under most climate change scenarios we anticipate a greater frequency of extreme weather event years, this propensity to underestimate diversity with a singular annual survey could prove detrimental to core management and restoration objectives for some grassland systems.

Sampling to characterize the entire ecosystem during the peak turnover or Summer (June to July) would account for 65% of the species identified in 2016 and 70% identified in 2017, but, similar to inter-annual variation, would be much lower on a site by site basis. Moreover, this observed level of turnover from inter-annual and seasonal variation is sufficient to change our inference about overall ecosystem integrity. For example, depending on the season and year sampled, we would infer that between 37% and 50% of the herbaceous vegetative community at a site was comprised of non-native species. In addition, comparing restoration success from sites sampled in different time periods from different years could bias the effectiveness of the results leading to improper site management.

While inter-annual and seasonal variations in vegetation diversity is well known, few have quantified these changes. We demonstrated that site similarity across years and seasons is low, and therefore, to properly and fully characterize diversity researchers and managers should sample across multiple years and seasons.

1This is not an exhaustive list of websites and sources

Partial funding for this study was provided by Bowling Green State University Center for Undergraduate Research and Scholarship and Ohio EPA.