Xiuping He, Distribution of polychlorinated biphenyls, polycyclic aromatic hydrocarbons and organochlorine pesticides in marine organisms from the coastal areas of the southern Shandong Peninsula, China(2018)SDRP Journal of Food Science & Technology 3(1)

The concentration and distribution of polychlorinated biphenyls (PCBs), polycyclic aromatic hydrocarbons (PAHs) and organochlorine pesticides (OCPs) in organisms from the coastal area of southern Shandong Peninsula were investigated. Concentrations of PCBs, PAHs and OCPs were highest in fish samples owing to their high lipid content. For PCBs, fish samples possessed high amounts of low-chlorinated biphenyls, while mollusk and shrimp samples had more highly-chlorinated biphenyls. All 16 PAHs were detected in marine organisms and the content of high molecular weight PAHs increased gradually from fish to mollusk, and to shrimp. Four isomers of HCHs were detected in marine organisms with recoveries higher than 90%. DDTs in marine organisms have been biodegradated mostly with little parent DDT input. Pollution profiles in different marine organisms were different due to differences water solubility. Their biological habits, habitats and related physiological characteristics were important factors describing these pollution profiles.

Polychlorinated biphenyls (PCBs), polycyclic aromatic hydrocarbons (PAHs) and organochlorine pesticides (OCPs) which mostly caused by anthropogenic inputs, are of global environmental concerns (Jones, 1999). The origin of PCBs was primarily from industrial manufacture (Rabodonirina et al. 2015), while PAHs are mainly derived from sewage discharge and exhaust gas after incomplete combustion of fuel (Brown et al. 1992; Chiesa et al. 2016). OCPs are mainly hydrophobic pollutants from industrial production and agricultural use (Yang et al. 2005). These pollutants degrade slowly by biological metabolism, chemical, or microbial decomposition. Therefore, they can stay in environment for a long time and the long-range transport though atmosphere and water can affect the global environment (Gui et al. 2014). Meanwhile, the hydrophobic properties of PCBs, PAHs and OCPs with high toxicity of carcinogenicity, teratogenicity, mutagenicity and endocrine disruption cause them accumulating in lipids easily through the food web, seriously threatening the health of humans and wildlife as well as environmental safety (Andersenet al. 2002; Arisawa et al. 2005; Harley et al. 2010; Boethling et al. 2009).

Food safety is a pertinent topic globally. Much attention was paid to the analysis of various toxic pollutants in seafood in order to limit exposure of consumers to contaminants while maximizing the benefits of seafood consumption (Herceg-Romanic et al. 2014). In marine ecosystem, PCBs, PAHs and OCPs are enriched in organisms from soil or water medium and amplified via trophic levels, leading to the contamination of seafood (Panseri et al. 2014; Storelli and Perrone, 2010). Once PCBs, PAHs and OCPs enter the human body through various ways, they would accumulate in organs such as adipose tissue, embryo, and liver and may finally lead to damage to the human body. Residues of PCBs, PAHs and OCPs in aquatic products including fish, shrimp, mollusks is a concern of most food safety agencies all over the world. Therefore, it is extremely important to explore the content and distributions of these pollutants residues in marine organisms.

The research area was located in the southern Shandong Peninsula as shown in Fig.1. Marine organism samples were collected by trawling using experimental net (mesh sizes: 5-45 mm) from 13 stations during 30 October to 7 November, 2014. In the research area, Jiaozhou Bay is a typical semi-close bay with the highest exchange rates in the mouth of the bay.

Samples were washed and classified into three categories: shrimp, fish and mollusk. Muscles of shrimp, fish and mollusk samples were taken and cut into pieces and homogenized followed by freeze-drying and then ground and sieved to 100 mesh. 0.1 g dry sample was extracted using 30 mL mixture of dichloromethane and n-hexane (v:v, 1:1) and extracted by ultrasonic in a water bath at 30℃ for 1 h and then separated by centrifugation at 3000 rmp for 15 min. The supernatant (10 mL) was filtrated by a column packed with Na2SO4, followed by eluting with 10 mL n-hexane. The elution was collected and transferred to a prior cleaned and weighed glass tube. Until a constant weight under 150℃, lipid content was weighed and calculated.

1-3 g samples were weighed and extracted ultrasonically using 40 mL mixture of dichloromethane and n-hexane (v:v, 1:1) and purified using 0.5 g activated copper powder. The extraction process was performed as mentioned above. The supernatant was collected and reconstituted with 5 mL n-hexane for further sample clean-up. After transferring to a 50 mL separatory funnel, 10 mL sulfuric acid was added and the mixture was oscillated for 20 min. After standing for layered, the lower layer was discarded. This step was repeated until it was colourless in the sulfuric acid phase. To separate the organic phase, 20 mL 20 g/L Na2SO4 solution was added and oscillated, followed by washing with 10 mL n-hexanefor twice. The obtained organic phase was merged and concentrated to 0.5 mL and then went through the alumina silica gel column. F1 and F2 components were obtained using 40 mL n-hexane and 50 mL mixture of dichloromethane and n-hexane (v:v, 1:1) as the eluting solution, respectively. The F1 fraction contains PCBs, p,p'-DDE and NAP. The F2 fraction contains the remaining PAHs and OCPs. Before analysis, F1 and F2 fractions were both concentrated to 500 μL by high purity nitrogen.

GC-MS (Agilent 6890N/5973B) was used to confirm and quantify PCBs, PAHs and OCPs in marine organisms by using a DB-5 column (30 m×0.25 mm, 0.25 μm film thickness). The analysis condition of GC-MS for the determination of PAHs, PCBs and OCPs were listed in Table S1. The carrier gas was high purity nitrogen gas (purity > 99.999%) with a constant flow rate of 1.0 ml/min and splitless injection. The temperature of transfer line was maintained at 280℃ and the ion source at 200℃. The ion source and electron energy were electron impact（EI）and set to 70 eV respectively with scan frequency of 0.5 s-1. Mass spectrograms of standards were detected and were compared with the NIST library to find out corresponding retention time of the compounds combining with their peak order. PAHs, PCBs and OCPs were quantified by external standard method.

Standard mixtures of PCBs, PAHs and OCPs with concentrations ranging from 0.05 to 2.00 μg/mL were used for the calibration curve. As shown in Table S2, the obtained linear correlation coefficients were all satisfactorily higher than 0.99. Limit of detections (LODs) of PCBs, PAHs and OCPs were calculated by adding 0.5 μg mix standards to the blank. The concentration of each compound was calculated by calibration curve. 5 blank samples were repeated for the same analysis and the average value was taken for the final LOD calculation.

Spiked blank, spiked matrix and three parallel samples were conducted for the quality control (QC) and quality assurance (QA). For precision analysis, all the analytes with three duplicate samples (n=3) had the relative difference below 14%. Matrix effects were checked by mixing standards of PCBs, PAHs and OCPs with marine organic samples and the recoveries of each samples were calculated ranging from 59.7% to 109.1% and the relative standard deviation (RSD) ranging from 1.8% to 10.1%.

Marine organisms in the research area mainly consist of fish, mollusk (sea snail, crab and squid) and shrimp as shown in Table S3. The average lipid content in fish, shrimp and mollusk were 7.6, 5.8 and 5.3%, respectively. Higher lipid content may increase the accumulation of organic pollutants which will lead to the difference of PCBs, PAHs and OCPs distribution in different marine organisms.

According to the conditions of chromatography/mass spectrometry, full scan mode was applied to the analysis of PCBs, PAHs and OCPs. The GC-MS spectrums of compounds were analyzed by comparing with the MS library including the order of peaks and their retention time. Fragment ion with no interference and high abundance was chosen as the selected ion. Fig. S1 to Fig. S3 showed the GC-MS spectrums of 7 kinds of PCBs, 16 kinds of PAHs and 8 kinds of OCPs, respectively.

The concentrations of PCBs in mollusk and shrimp samples were both lower than that in fish samples and the composition was more complicated. The accumulation amount of high-chlorinated biphenyls in mollusk and shrimp was much higher than that in fish. In the coastal area, PCBs adsorbed on surface sediment were ingested by shrimp and thus accumulated in the body of shrimp. PCBs in the body of mollusk mainly originated from the predation of lower organisms. Therefore, the different distribution trends of PCBs in inter-species can be ascribed to their biological habits, habitats and physiological characteristics.

The composition of PAHs in the similar organism was relatively stable which was ascribed to the stable input of PAHs. Another reason may be due to the sampling time which was the maturation periods of marine organisms that may cause a much similar content of pollutants accumulated in the body of organisms.

HCHs are the most widely used OCPs in environmental samples (Breiviket al. 1999). Four isomers of HCHs including α-HCH，β-HCH，γ-HCH and δ-HCH were all detected in marine organisms with recoveries higher than 90%. The ratio of β-HCH was much higher than that in the environment pollution source which was related to its strong resistance to biodegradation (Liu et al. 2001). The concentrations of HCHs in fish samples were all significantly higher than that in shrimp and mollusk samples which were related to the higher lipid content and the sampling time at autumn, a longer growth cycle leading to higher accumulation of HCHs.

Site distributions of ∑DDT (Fig. 4) and ∑HCH (Fig. 5) in marine organisms showed that the concentration of ∑DDT in fish samples was the highest in site 6. The concentration of ∑DDT in shrimp and mollusk had no obvious distribution pattern. There are no big differences of ∑HCH content in shrimp among all the sites. The content of ∑DDT and ∑HCH in similar organisms had no obvious distribution regularities indicating that the bioaccumulation of OCPs was not only attributed to environmental factors, but also related to the selectivity towards pollutants and the degradation ability of the organisms.

The concentration and distribution of PCBs, PAHs and OCPs residues in marine organisms collected from the coastal areas of the southern Shandong Peninsula were analyzed and discussed in this paper. Seven PCBs were detected in all organisms and the highest concentration was found in fish, followed by mollusk and shrimp indicating that PCBs can be easier concentrated in organisms with more lipid content. Low-chlorinated biphenyls possessed the highest amount in fish samples while high-chlorinated biphenyls were higher in shrimp and mollusk samples. The different distribution trends of PCBs in different organisms were ascribed to their living habits, habitats and physiological characteristics. Sixteen PAHs were detected in all organism samples and the distribution of PAHs in different organisms showed the same trends with that of PCBs. PAHs composition in the same species was quite the same. Low molecular weight PAHs, such as NAP, FLU and PHE were much easier to be concentrated in fishes, while high molecular weight PAHs made a greater contribution to mollusk than fish. A comparative proportion of low- and high molecular weight PAHs existed in shrimps which was attributed to their habitat (perched on the ground floor) that was greatly influenced by PAHs in sediments. It was the highest of OCPs in fish samples, followed by shrimp and mollusk. Four isomers of HCHs were detected in over 90% samples and it showed high ratio of β-HCH/HCH. The content of ∑DDT was higher than ∑HCH in all the organism samples indicating the better lipid-soluble of DDT in organisms. ∑DDT in organisms was mainly derived from the pollutants input before and biodegradation happened in organisms. The distributions of ∑HCH in shrimp and mollusk samples were irregular, which was not only related to the environment factor, but also to the physiological function. 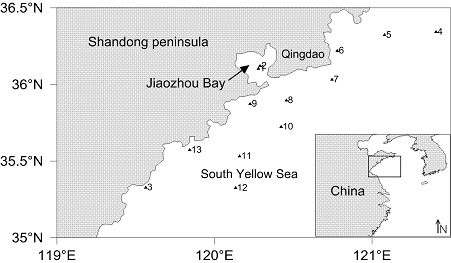 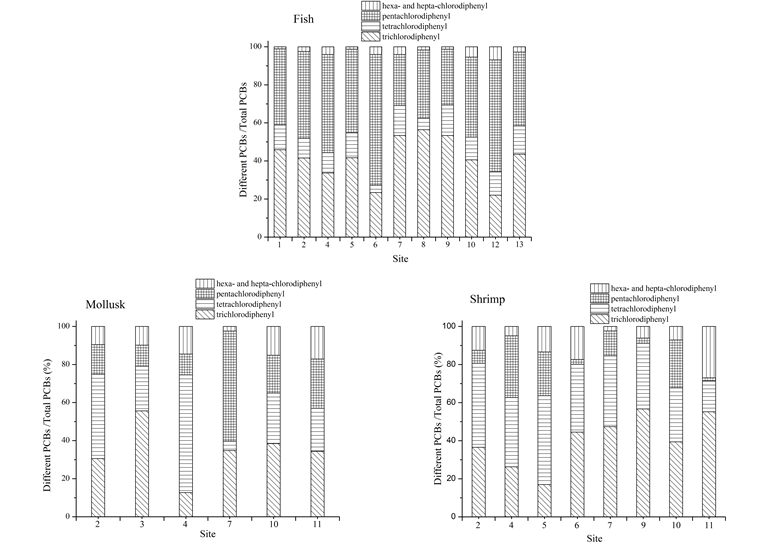 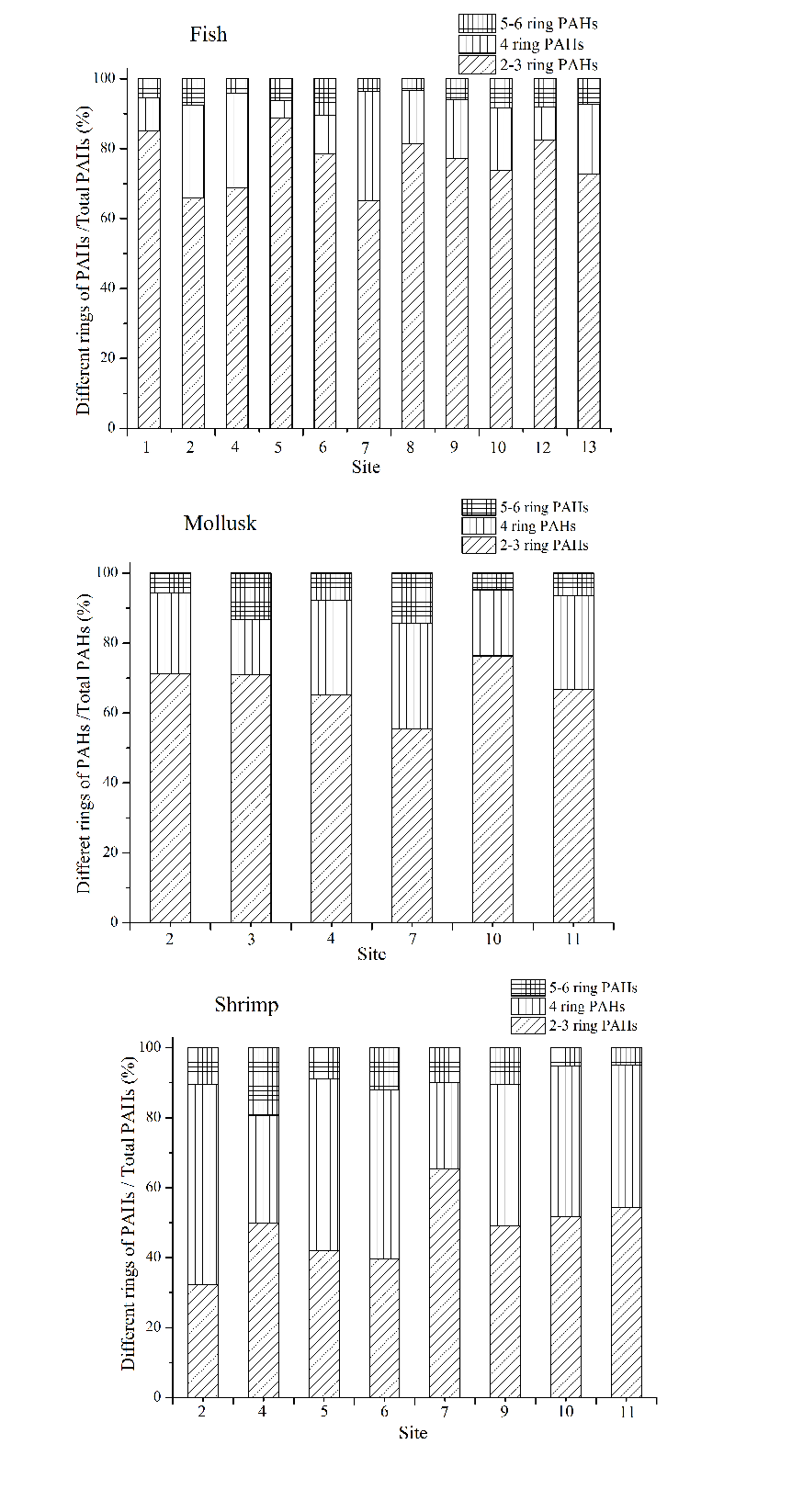 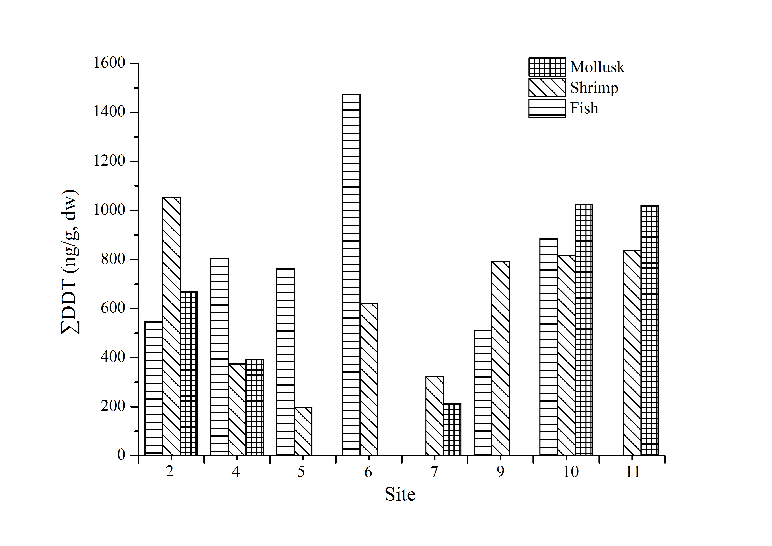 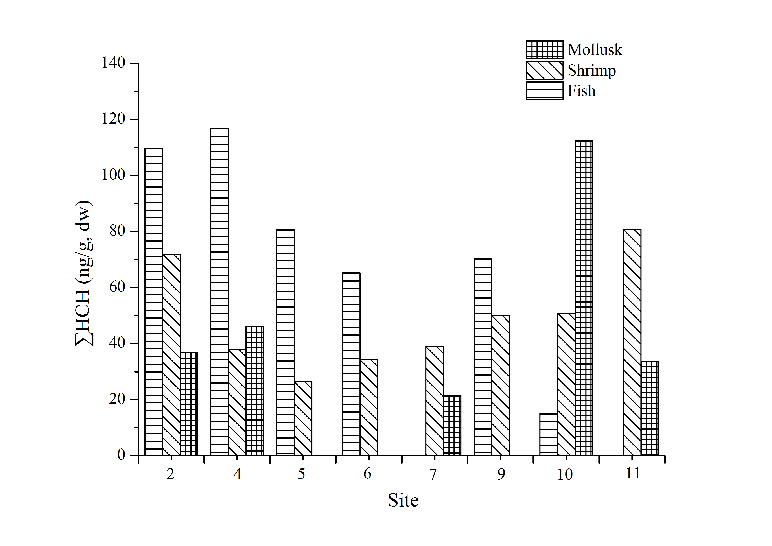