LOUAILECHE, Effect of storage time and temperature on the nutritional quality of commercial orange jam(2016)SDRP Journal of Food Science & Technology 1(2)

The aim of the present study was to assess the effect of storage period and temperature on the nutritional quality, carotenoid and ascorbic acid contents of orange jam during storage for 30 days at 25 °C and 35 °C. For that purpose, special attention was paid to total sugars (TS), hydroxymethylfurfural (HMF), free amino acids (FAA), ascorbic acid (AA) and carotenoids. It was observed that storage conditions of jam led to statistical significant alterations for all monitored parameters. The decreasing parameter for jam at the end of storage under 25 °C and 35 °C, respectively, were 12.5% and 15% for TS, 50% and 59.5% for FAA, 23.5% and 29% for AA and 3% and 19% for carotenoids ; likewise, the increasing were 144% and 169% for HMF. The practical implications of this work are that the derived knowledge could be very useful to optimize storage conditions in order to improve the quality of these products.

Currently, there is considerable demand for fruits and vegetables because they are considered as rich sources of some essential dietary micronutrients, and more recently they have been recognized as important sources of a wide array of phytochemicals that may benefit human health (Yahia, 2009). Nevertheless, many such products are seasonal and perishable. The seasonality and perishability of fruits explain the need to apply preservation technologies, including jam making. This technology is very typical in fruit preservation (Osvald & Stirn, 2008; Rababah et al., 2012 ; Renna et al., 2013).

Historically, jams originated as an early effort to preserve fruit for consumption during the off-season. It is an intermediate moisture food prepared by boiling fruit pulp with sugar, pectin, acid and other ingredients (preservatives, colouring and flavouring substances) until obtaining a reasonably thick consistency (Wicklund et al., 2005; Reichert et al., 2015). Generally, fruit jam storage at high temperature leads to a significant decrease of nutritive values and sensorial properties (Vidhya & Narain, 2011). Orange jam, among other orange derivatives, is a viable alternative to the economic exploitation of fruits, adding value to the fruit and promoting access to its beneficial constituents for the entire year. Fruit jams are commonly used with breads, cookies, and cake fillings, among others (Morlli & Prado, 2012).

To our knowledge, the literature available at present is poor in references about evolution of nutritional quality of orange jam during storage in different conditions. Thus, the aim of this paper is focused on the assessment and monitoring of sugars, HMF, free amino acids, ascorbic acid and carotenoid contents of orange jam during storage, and the determination of the interaction time-temperature effect.

Three units each from two batches of orange jam marketed in Algeria were used in the current investigation. Based on the details indicated on the label, jam is composed of fruits, sugar (sucrose), pectin, citric acid and preservative (E202).

The samples were divided into two groups. The first group was stored at 25°C and the second at 35°C. The monitored parameters were determined before storage of samples of each batch, and after 3, 6, 9, 12, 15 and 30 days.

The total sugars were determined according to Dubois et al. (1956).  An aliquot (0.5 ml) of jam      extract was mixed with the same volume of phenol (5%) and 2.5 ml of sulfuric acid (95%). After stirring, the reaction mixture was incubated at 105°C for 5min. The absorbance was measured at 490 nm (spectrophotometer Uvline 9400, Secomam, Ales, France). Total sugar content was calculated using a standard curve of sucrose.

The HMF content was determined according to White (1979). Samples were placed in a flask of 10 ml; 100 μl each of Carrez I (potassium ferricyanide 15%) and II (zinc acetate 30%) reagents were added and the volume was adjusted wit-h distilled water. After decantation, the supernatant was paper filtered. With a clarified solution containing 0.2% sodium bisulfite as reference and a similar solution without bisulfite as sample, a difference spectrum was obtained which represents only the HMF in the sample, without the interfering absorption of the jam. The HMF content was determined according to the following equation:

A284 and A336: absorbance values, respectively.

74.85: Specific factor of dilution and conversion.

Carotenoid content was determined according to Choi et al. (2002). One gram of jam was mixed with 10ml of extracting solvent (hexane: acetone: ethanol, 50:25:25, v/v/v). After centrifugation for 10 min at 5000 rpm, the top layer of hexane containing the carotenoids was recovered, and the absorbance was measured at 430nm. The carotenoid content was estimated with reference to a calibration curve obtained using β-carotene. The results were expressed in mg β-carotene equivalent per 100g of jam.

Data were analysed using infostat software. Analysis of variance was performed by ANOVA procedure with two factors; the model included the effect of storage time and temperature. Means were compared by LSD analysis at a least significant difference of P < 0.05 value. Experiments were conducted in triplicates.

Sugars are the most important constituents of fruit products and are essential factor for the flavor of the food products and act as a natural food preservatives (Pavlova et al., 2013). From the results shown in Figure 1 it is evident that time and temperature of storage affected the total sugar content. The initial total sugars content of jam (69.3g/100g) decreased by 12.5% and 15% after 30 days of storage at 25 °C and 35 °C, respectively. Statistical analysis revealed that the interaction time-temperature factor had a significant effect (p<0.05) on content of these compounds. The losses in sugars calculated in this study are higher than those reported by Chauhan et al. (2012) and Touati et al. (2014). According to these authors, the sugar content was reduced by 0.56% and 0.87% after storage for 6 months of coconut jam at 28 °C and 37 °C, respectively and by 9.02% and 7.46% after 60 days of storage at 25°C and 37 °C, respectively in apricot jam. This difference is probably due to the quality of the fruits used, product formulation, etc.

The decrease of sugar content might be due to the contribution of the reducing sugars to non-enzymatic browning phenomenon and HMF formation (Pavlova et al., 2013).

Hydroxymethylfurfural is acknowledged as a deterioration indicator for several products containing carbohydrates (Korus et al., 2015). This aldehyde is formed from the dehydration of hexoses in an acid medium or as a result of Maillard reactions and caramelization. Several authors claim that HMF reduces the nutritive value of many foodstuffs (Rattanathanalerk et al., 2005). Consequently, HMF is an important component for jams because of their high carbohydrate content. HMF content of jams can be increased with storage at unsuitable conditions during marketing (Aslanova et al., 2010). The HMF content of orange jam prior to storage was of 1.8 mg/100 g. With respect to the evolution of HMF content during storage, an increase was observed at 25 °C and 35 °C (144% and 169%, respectively). This result confirms a large dependence of the HMF formation on storage temperature (figure 2). Statistical analysis revealed that interaction time-temperature factor had a significant effect (p< 0.05) on HMF content. These results were consistent with the findings of Rada-Mendoza et al. (2004) who reported a significant increase of HMF content for peach jam after storage for 12 months, which achieved 316% and 577% at 20 °C, 35 °C, respectively. The formation of HMF might be attributed to sugar (figure 3) and amino acid degradations which occur in acidic medium (Naknean et al., 2009; Anese & Suman, 2013).

In the literature, little is known about the impact of storage conditions on amino acid content of orange jam. Amino acids are important food compounds, contributing not only to the nutritive value of foods, but also providing several health benefits such as anti-mutagenicity as well as reduction in blood sugar and coronary heart diseases (Dajanta et al., 2011). Furthermore, they are involved in multiple functions as a source of energy and as protein precursors and other contributing to the sensorial quality of foods; their determination is becoming more necessary as they can influence the quality of fruit-derived products (Serrano et al., 2013).

Results presented in figure 4 showed that total free amino acid (FAA) content was affected during storage under the experimental conditions applied. There was a significant decrease in total free amino acid contents during storage. The reductions were higher with longer time storage and higher temperature. After 30 days, total FAA content decreased by 50% and 59.5% at 25 °C and 37 °C, respectively. Touati et al. (2014) reported that free amino acid content of apricot jam decreased by 34% and 46% after storage for 2 months at 25 °C and 37 °C, respectively. This decrease might be due to the intervention of amino acid in non-enzymatic browning process as Maillard reactions. Data presented in figure 5 revealed a negative correlation between free amino acid and HMF contents.

Nutritional properties are related to the content of ascorbic acid, which has been reported to have potential beneficial health properties. Beside this effect, vitamin C is an efficient scavenger of reactive oxygen species; it is also involved in the endocrine system in the body and plays role in the synthesis of hormones (Haleng et al., 2007). However, ascorbic acid is an unstable compound, under certain storage conditions such as elevated temperatures, and exposure to air and light. It was reported that several decomposition reactive products occur via the degradation of vitamin C and these compounds may combine with amino acids, thus result in formation of brown pigments (Duru et al., 2011).

In the literature, little information is available on the changes in carotenoid contents of jams during storage. Carotenoids are lipid-soluble pigments that play an important role in human health. Increased consumption of these compounds has been related to a decreased risk of developing several types of cancer, macular degeneration and cardiovascular disease (Dutta et al., 2005). These bioactive compounds are the major dietary precursor of vitamin A, becoming retinol inside the human body. Besides its function as pro-vitamin A, the functional significance of this carotenoid is also due to its antioxidant action (Plaza et al., 2011).

It could be concluded that storage conditions of jam led to statistical significant alterations for all investigated parameters. Amino acids were the most affected by storage. On the other hand, HMF accumulation in fruit jam increased thus the determination of HMF is useful to assess the quality of jams during storage. The results revealed that the nutritional quality depletion of the investigated jam was more pronounced at 35°C than at 25°C. Thus, it can be concluded that jams should be stored at temperatures lower than 25°C because these products are still good sources of nutritional substances with antioxidant potential and offer an important opportunity to create a healthy, seasonally independent and mixed diet.

The information obtained in the present study finds its practical application because it showed the behaviour of orange jam during the period separating the production from the consumption. 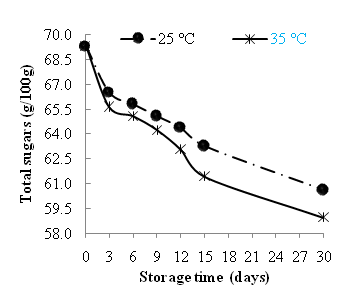 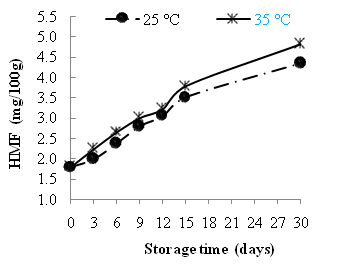 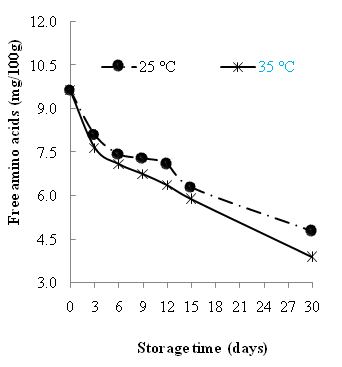 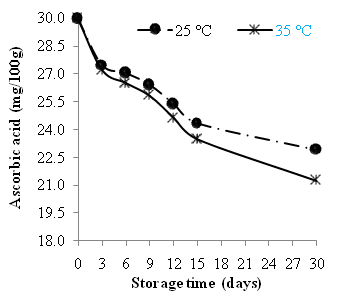