The ethanol extraction method was utilized to extract the oil from camellia seed oil. Single-factor tests were applied to study the effects of ethanol concentration, material/solvent ratio and extraction temperature on the yield of camellia seed oil. Then, response surface methodology (RSM) was conducted to ascertain the optimum condition for oil extraction, and the fatty acid composition of the oil were analyzed. Results indicated that the optimal parameters of extraction were using ethanol concentration 100%, material/solvent ratio 1:12 and extraction temperature 90 ℃. Under these conditions, the extraction yield was high up 45.36%（v/w）.According to the results of GC-MS analysis, the camellia seed oil was composed of eight kinds of fatty acids. The content of 10-Octadecenoic acid was 77.57%. Calculating via the area normalization method, the unsaturated fatty acid accounted for 88.01% (w/w) of the total amount of oil. Therefore, the camellia seed oil was a kind of nutritional oil with a high development potential.

The genus Camellia, native to East Asia, belongs to the Theaceae family and comprise ca.100 large evergreen shrub species world-wide. They are economically important for human consumption (eg., Camellia sinensis), oil production (eg., C. oleifera), cosmetics (eg., C.japonica, C. reticulate, and as ornamental plants (eg., C. japonica, C. reticulate, and C.sasanqua). In China, the seeds of C. oleifera can be pressed to obtain high quality oils (camellia seed oils) that are used extensively for cooking. The fatty acid (FA) composition of edible oil contains abundant unsaturated fatty acids (UFA) [1]. The UFA content in the oil can reach as much as 90%, which may be highest amount so far reported in edible oils. Moreover, its monounsaturated FA content is greater than that of olive oil, which is UFA complies completely with the international nutritional standards of “omega meals”.[2-6] Camellia oil is often the target of adulteration or mislabeling because it is an expensive product with unique flavor and taste, good storage stability and high nutritional and medicinal values.

In China, oil extraction technologies that have been extensively studied and applied mainly include: physical pressing method [7], organic solvent dissolution method [8], supercritical CO2 extraction method [9-10], water generation method [11] and water enzymatic method [12]. Physical compression results in high levels of grease impurities, high acid and peroxide values, and is not easy to store. The use of solvent No. 6 to extract oil and oil increases the oil production rate, but solvent evaporation and environmental pollution as well as solvent residue remain an insurmountable problem[13-14]. As an extraction solvent, ethanol had a wide application prospect because it was recyclable and belongs to a non-toxic, green and environmentally friendly environment. In response to these problems, the ethanol was used as an extraction solvent to extract camellia seed oil and optimize the extraction process to provide basic data support for the development of the camellia seed oil industry.

Camellia seeds（C. oleifera A.）were obtained from the Hubei Suizhou Yunwu Mountain Tea Farm. These samples were stored at ambient condition in air tight plastic containers until used. These seeds were sieved using 60 mesh sieves (250mm). The seeds free of foreign matter were then used directly for oil extraction after grinding into fine powder. The moisture content of camellia seeds was 2.91% by dry method. And the fat content was 49.5% by Soxhlet extraction method.

(1) Effect of ethanol concentration on extraction rate. Weigh 60g of camellia seed in 1000mL conical flask, add ethanol solution with concentration of 50%, 60%, 70%, 80%, 90%, 100% according to the ratio of material to liquid 1:6. Then, condensing and refluxing for 2 h under the conditions of the extraction temperature of 75 °C, the mixture was filtered, and the supernatant was collected, then concentrated by rotary evaporation, and the obtained oil was collected.

(2) Effect of materials/liquid ratio on extraction rate. Weigh 60g of camellia seed in 1000mL conical flask, add ethanol solution with materials/liquid ratio of 1:4, 1:6, 1:8, 1:10, 1:12, 1:14 (m/v) according to the ethanol concentrations 95% . Then, condensing and refluxing for 2 h under the conditions of the extraction temperature of 75 °C, the mixture was filtered, and the supernatant was collected, then concentrated by rotary evaporation, and the obtained oil was collected.

(3) Effect of extraction temperature on extraction rate. Weigh 60g of camellia seed in a 1000mL Erlenmeyer flask, add 95% ethanol solution according to the material/ liquid ratio 1:10, and condense and reflux for 2h at 55 °C, 65 °C, 75 °C, 85 °C, 95 °C, the mixture was filtered, and the supernatant was collected, then concentrated by rotary evaporation, and the obtained oil was collected.

Table1:  Factors and levels of experiment

Fatty acids of oils were saponified and methyl-esterified, based on the MIDI protocols. The GC-MS analysis for the fatty acid methyl esters(FAMEs)（1μL）was conducted using an QP2010 plus gas chromatograph (Shimadzu technologies) equipped with a capillary column, HP-88, with dimensions of 100 m×0.25 mm×0.25μm film thickness (Shimadzu technologies). The capillary column temperature was programmed from 150 to 250℃ by starting from 150℃ for 2min,increasing at a rate of 2℃ min-1, and the holding and at 250℃ for 10min.Helium was the carrier gas with a flow rate of 35.6 mL min-1.The mass spectrometer was operated in the electron impact mode. The FAME profile was identified by comparing with the database, National Institute of Standard Technology (NJST) Library. The individual fatty acid composition was expressed as percentages of total fatty acids [15]. 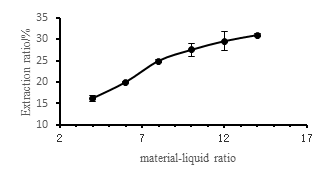 Fig.3 Effect of different ratios of material to liquid on extraction rate of camellia seed oil

The equation R2 = 0.9914, which fully demonstrates the high degree of fit of the model over the boundaries of the experimental range. Equation analysis and significance test were performed on the regression equation. The results are shown in Table 3.

Camellia seed oil was subjected to methylation treatment and analyzed by GC-MS. The ion chromatogram of the gas chromatograph is shown in Fig. 5. After analysis by computer chemistry workstation, the fatty acids are detected. The area normalization method is used to calculate the relative fatty acids in the oil. Percentage, the results are shown in Table 5.

Ethanol was used for the extraction of oils such as soybean oil [18], rice bran oil [19] and sunflower oil [20], and ethanol was safe, non-toxic and recyclable. Therefore, this study used ethanol to extract camellia seed oil.

The results of single factor analysis showed that the low concentration of ethanol was accompanied by the spillage of tea saponin in the process of oil extraction, which affected the quality of oil. The higher the temperature, the more beneficial to increase the solubility of ethanol to oil; the larger the ratio of material to liquid, the oil extraction The higher the rate, the more the ratio of material to liquid increases, the extraction efficiency gradually stabilizes.

This work was supported by the Central Public-interest Scientific Institution Basal Research Fund for Chinese Academy of Tropical Agricultural Sciences (No.1630122017014).