Cordyceps cicadae (C. cicadae) has been used in traditional medicine and is presently being developed for therapeutic purposes and dietary supplements. One of its effective bioactive ingredients is N6-(2-hydroxyethyl) adenosine (HEA), which can exert an analgesic effect by inhibiting neurotransmitter release and can be used to ameliorate moderate to severe pain, including cancer pain. Although there have been extensive studies confirming its safety, the embryo-fetal development toxicity of HEA-enriched C. cicadae mycelia has not been evaluated.

This study was to describe the potential adverse effects of orally administered HEA-enriched C. cicadae mycelia on fertility and early embryonic development to implantation in Sprague-Dawley rats at doses of 500, 1,000, and 1,500 mg/kg.

No external, visceral as well as skeletal abnormalities were noted among all groups. There were no statistically significant differences in the number of fetuses, corpora lutea, implantation sites, embryo resorptions, stillbirths, and post-implantation between all dosing groups. Moreover, there was no embryo-fetal developmental toxicity observed.

Cordyceps cicadae (C. cicadae), also named as “Chan Hua” in Chinese, is an entomopathogenic and parasitic fungus that belongs to the family Clavicipitaceae, Ascomycotina[1]. The mycelia of this fungus grow inside the nymph of specific hosts (Cicada flammata Distant, Platypleura kaempferi Fabricius, Crytotympana pustulata Fabricious, Platylomia pieli Kato and Oncotympana maculatieollis Motsch) and then forms fruiting bodies on the surface of these insects[2]. C. cicadae has been used as both food and Traditional Chinese Medicine since 1580 years ago, which was much longer than the use of Ophicordyceps sinensis[3], one of the most famous traditional Chinese medicines and medicinal mushrooms. In the long history of medicine Cordyceps cicadae has been used, it has been primarily used in the treatment of childhood palpitation, epilepsy, convulsions, and many eye diseases[4]. Recently, extensive pharmacological properties of C. cicadae were reported, including renoprotective attributes[5], anti-hypoglycemic properties, anti-tumor properties[6], analgesic activity, sedative function[7], anti-fatigue effects[8] and immunomodulatory effects[9].

N6-(2-hydroxyethyl) adenosine (HEA), an adenosine derivative, is one of the main bioactive ingredients from C. cicadae. Since 1980s, researchers have confirmed that endogenous nucleosides and their analogues may be involved in pain modulation[10, 11]. HEA can bind to α1 receptors, thereby exerting an analgesic effect by inhibiting neurotransmitter release[12]. Moreover, its chemical structure is different from that of opioid analgesics so there is no dependence developed following the use of HEA for pain relief, which can be safely used for clinical application[13]. Recently, a well-designed, preclinical study has been conducted to demonstrate that HEA-containing C. cicadae fermentation product has 99% acetic acid-induced writhing-reducing effect in Kunming mice, which was higher than that of morphine[14]. Hence, there is potential in developing C. cicadae enriched with HEA as an ingredient in functional foods or medicinal products intended to ameliorate moderate to severe pain, including cancer pain.

At present, production of HEA by various Cordyceps species has been one of the most extensively explored areas in recent years owing to its enormous commercial value[15]. While HEA-enriched C. cicadae seems promising, its safety concern has not been evaluated and should be addressed. Myriocin (ISP-1/thermozymocidin), for example, is a common secondary metabolite purified from cultured filtrates of Isaria sinclairii parasite on the larva of the cicada but is known to induce severe disorders, resulting in the death of the animals at a dose of 1 mg/ml[17]. Although an extensive set of toxicology studies on C. cicadae has been investigated[18-20], the teratogenic effects of this insect-fungus complex on the embryo during pregnancy have not been evaluated. This is the first study aims to examine the influence of HEA-enriched C. cicadae mycelia broth on embryo-fetal development in Sprague-Dawley rats to certify its safety as a functional food ingredient.

110 pregnant Sprague-Dawley rats at 8 weeks of age (BioLASCO Taiwan Co., Ltd., Ilan, Taiwan) were acclimatized for three days prior to the initiation of the study. The animals were housed in autoclaved polyethylene cages (one per cage), kept in standard conditions of temperature (22 ± 3°C) and illumination cycle (12:12 h light and dark schedule), fed with MFG diet (Oriental Yeast Co., Ltd, Tokyo, Japan), and given ad libitum access to water. This protocol was approved by the Institutional Animal Care and Use Committee (IA­CUC:101-12i) and carried out in full compliance with Good Laboratory Practice (GLP).

This study was performed under the guidelines of Organiza­tion for Economic Co-operation and Development (OECD) 414 (Prenatal Developmental Toxicity Study)[21]. Using a random number generator (Excel; Microsoft, Redmond, WA), the experimental animals were divided randomly into 5 groups (a minimum of 20 animals per group) as follows: three dosages test groups, one negative control group and one positive group. The negative control group received vehicle treatment (10 ml/kg distilled water daily), the positive control group received 10 ml/kg aspirin (Sigma-Aldrich) at a dosage of 250 mg/kg body weight (bw)[22] while the three dosages test groups received 10 ml/kg HEA-enriched C. cicadae mycelia at a dose of 500 (low dose), 1,000 (mid dose) and 1,500 (high dose) mg/kg bw, respectively. These dose levels were selected according to the previous chronic toxicity study[20] and were administered orally in the gestation of 6 to 15 days, which is defined as the critical period for early fetal structural development. The day a vaginal plug and/or sperm in vaginal smear were observed was defined as day 0 of pregnancy.

Average measurements of body weight and food were conducted daily during the study period. On the 20th day of pregnancy, the rats were anesthetized with pentobarbital, and the fetuses were delivered by caesarean sections. All fetuses were weighed and the corpora lutea, implantation, absorbed fetus, and viable fetus were numbered. Individual viable offsprings was then assessed for observable abnormalities                 such as anencephaly, cerebral swelling, exencaphaly, cranioschisis, hydrocephaly, microcephaly, microphthalmia, anophthalmia, exophthalmos, anotia, microtia, low-set ears, agnathia, micrognathia, cleft palate, cheilognathopalatoschisis, thoracoschisis, thoracogastroschisis, spina bifida, scoliosis, lordosis, kyphosis, hypospadias, anal atresia, short tail, coiled tail, acaudia, omphalocele, polymelia, dysmelia, ectromelia, hemimelia, polydactyly, adactyly, syndactyly, brachhydactyly, and ectrodactyly. Half of the fetuses in each litter of the negative control group, high dose HEA-enriched C. cicadae treated group and positive control group then underwent bone examinations while the remaining half of the fetuses underwent organ tissue examinations. The visceral examination of fetuses was performed according to previous studies[23, 24]. For skeletal examination, the fetuses were performed after clearing 5% formalin-fixed fetuses with KOH and staining the skeleton with Alizarin Red S. Skeletal development was evaluated according to previous methods[25]. All animals will undergo tissue and bone examinations if abnormalities were found in the high dose group.

All data were expressed as means and standard deviations (SD) and analyzed by SPSS statistical software. One-Way ANOVA followed by Duncan test were executed to determine the significant difference between the treatment and control groups. The significance level was set as 5%.

Moreover, the success of reproduction was not significantly affected in the HEA-enriched C. cicadae mycelia treatment groups by measuring different gestational parameters (Table 1), indicating that HEA-enriched C. cicadae mycelia had no adverse effect on maturational and developmental milestones in offsprings. The number of fetuses, corpora lutea, implantation sites, embryo resorptions, stillbirths, and post-implantation loss was similar among the experimental groups (p>0.05). Concerning the fetal variables, the mean birth weight of the experimental pups was 3.64±0.87 for the negative control group and 3.85±0.91, 3.69±0.86 and 3.66±0.84 g for the low, mid and high HEA-enriched C. cicadae mycelia treated groups, respectively. Although there was a statistically significant increase in fetal weight in the low dose group (p<0.05), there was no dose-response. Besides this aspect, there were no distinguishable differences among the sex ratio of the fetuses in all groups (p>0.05). On the other hand, when dams were treated with aspirin, strong teratogenic activities such as reduced average fetal weight (3.11±1.05; p<0.05), high resorbed litters numbers (3.78±5.09; p<0.05) as well as severe post implantation loss (31.80±40.41; p<0.05) were noted.

Lastly, based on the examination under the stereoscope, a total of 738 pups of the treated groups and 394 pups of the control groups showed no evidence of external and visceral variations (data not shown). Regarding fetal skeletal development, there were no statistically significant differences in the number of cervical vertebrae, thoracic vertebrae, lumbar, sacral vertebrae, caudal vertebrae, excessive fontanelle opening, fused ribs, sternum or sternal split between the control and high dose groups (Figure 3), illustrating that HEA-enriched C. cicadae mycelia has no teratogenic effect on the embryos of SD rats, even at the highest dose of 1,500 mg/kg bw.

A previous study indicated that C. cicadae has a substantially lower gene mutation rate than C. sinensis[29], demonstrating its stability in genomic structure and its capability in regulating secondary metabolite production. Based on this finding, C. cicadae can be expected as an herbal material with enormous development and usage prospects, covering food, healthcare, cosmetics, biological agricultural chemicals and medicines.

HEA-enriched C. cicadae mycelia was given to pregnant Sprague-Dawley rats via gavage during the critical period for early fetal structural development (day 6 to 15). Results showed no overt signs of reproductive or embryo-fetal developmental toxicity in the rats at the highest dose tested (1,500 mg/kg bw/day, the No Observed Effect Level). Based on these findings, it was considered that HEA-enriched C. cicadae mycelia revealed no teratogenicity in Sprague-Dawley rats. 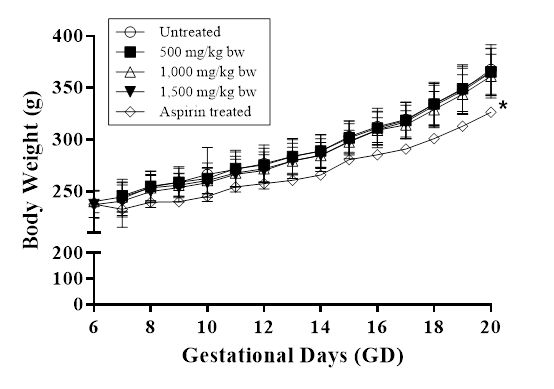