Pre-analytical sampling conditions play an important role for the correct determination of blood concentrations of biomarkers and drugs in the clinical environment. In the context of daily clinical routine and clinical studies, oxidative stability in vitro should be carefully considered. Herein we report differences in vitamin C levels under commonly used handling and storage conditions and we propose a simple and efficient sampling protocol. Plasma and serum samples were analyzed by HPLC-UV and different handling-, time- and storage conditions were investigated in detail. Our findings show that protection from oxidation significantly prevented degradation under different storage conditions. The immediate separation of stabilized plasma from blood cells showed a protective effect on vitamin C stability. In addition, long-term storage of vitamin C was positively influenced by addition of protective agents, assuring stability up to six months. Oxidative degradation could affect not only vitamin C but also other small molecule metabolites and should therefore be intensively evaluated before implementation in daily clinical routine as well as in metabolomics studies.

Vitamin C or ascorbic acid (VITC) occurs in many natural products and foods, especially in berries and vegetables where it is present in contents up to 500 mg/100g [1].

From a chemical point of view, VITC is a vinylogous carboxylic acid and its acidity corresponds more to a carboxylic acid than to an alcohol moiety (pKa = 4.2) [2]. Because of its chemical structure, VITC shows strong redox properties at physiological pH. In human body fluids, it plays a key role in the inactivation of reactive oxygen species (ROS) [3] . VITC is a potential scavenger to free radicals, inducing well-known "oxidative stress" causing cardiovascular diseases [4]. The protective effect of VITC is described uncountable times in medical sciences and folk medicine [5]. For decades, VITC has been considered a magic bullet in the fight against cancer, infectious diseases and other life-threatening diseases [6-11]. Also, iron absorption in the small intestine is regulated by VITC reducing Fe3+ to Fe2+ [12, 13]. Adequate VITC values in plasma are found between 22.7 – 114 µM (2 mg/L – 40 mg/L) [14]. Malnutrition is one of the leading causes for VITC deficiency, although the overt manifestation (also called scurvy) is rare in developed countries. Hypovitaminosis C has been reported in the elderly, smokers, in chronic alcohol and drug abuse, during pregnancy and chronic intoxications [3, 15, 16]. Also, critically ill patients and oncology patients often show low levels of VITC [17, 18]. On the other hand, excessive intake of VITC may increases the risk of kidney stone formation in men as reported by research groups [19, 20]. In the metabolomics approach, VITC levels are used as an indicator of sample quality [21]. Therefore, the determination of VITC levels in human body fluids plays an essential role in the investigation of several physiological or pathophysiological conditions.

Due to the oxidative instability of VITC in vitro, pre-analytical handling of human VITC samples remains challenging [22]. After blood isolation and plasma/serum generation, VITC is rapidly oxidized to dehydroascorbic acid (DHA) which is a reversible process. DHA can further irreversibly hydrolyzed to 2,3-diketogulonic acid (Scheme 1). This intermediate is subsequently metabolized to oxalic acid and CO2. [23, 24].

Consequently, blood samples should be immediately separated and stabilized in plasma or serum. Protection from oxidation can be achieved by adding several chemical reagents as has been described previously [22]. Unfortunately, due to the lack of time and instrumentation in the daily clinical practice, blood samples are not necessarily separated from cells immediately after centrifugation. Delayed sample processing, transportation and storage at ‑20 °C have a significant impact on the in vitro VITC concentration. As supported from our findings, these conditions are not sufficient to stop VITC in vitro decay.

Our work aims to examine the pre-analytical stability of VITC under different conditions and to define a simple and convenient method for VITC processing during clinical routine work.

Sample preparation was performed as described in the manufacturer’s protocol. In short, 100 µL of plasma/serum was added to an equal amount of precipitation reagent. The mixture was set on liquid-ice-water bath (4 °C) for 10 min. Afterwards serum and Li-heparin tubes were centrifuged at 4000g for 10 min. Finally, 20 µl of the clear supernatant were injected onto the column. The analysis was performed using a Thermo Fisher Ultimate 3000 UHPLC system coupled to a diode array detector DAD-3000 (Thermo Fisher, San Jose, California, USA). VITC was monitored at λ=243 nm.

Calibrator and quality control (QC) samples (Low, High) were prepared and analyzed according to the manufacturer’s protocol. Daily calibration was prepared. QC Low and High were analyzed in duplicate on each of the eight days. Stability of QC was also determined in duplicate. Accuracy was calculated in terms of bias as the relative deviation of the mean calculated concentration at each QC level from the corresponding theoretical concentration. Intra-day and inter-day precision were calculated as relative standard deviation (RSD) according to reference Peters et al. [25].

All human blood samples were collected from different, apparently healthy volunteers at the Kantonsspital Aarau, Switzerland. LH tubes were prepared with 50 µL 1 M DTT (to yield a final concentration in the range of approx. 8 to 16 mM depending on final blood drawing volume). In order to maintain the residual vacuum, a sterile insulin syringe was used. Modified tubes were stored at +4 °C up to 28 days until use. After 28 days vacuum was still intact as the tubes would be filled to the top when used for blood collection. Afterwards, LH samples were submitted to specified storage (+4 °C, -20 °C, -80 °C) and reanalyzed at selected time points. Flash-freeze was performed using a dry-ice-methanol bath (‑78 °C). After thawing, samples were immediately processed and analyzed. Chosen time-points correspond to common turnover times in the routine lab setting.

Lyophilized QC samples were solved in water, processed and transferred to either HPLC glass or plastic vials. QCLow samples stored at 4 °C were stable over 9 days when calculated against a fresh calibration. Interestingly QCLow samples showed better stability in glass vials in contrast to plastic vials. However, differences were not significant (p=0.059). Intra-day and inter-day variances, bias and stability of processed QC samples are presented in table 1. Our findings correspond to the manufacturer’s specifications with bias and variance lower than declared. Carry-over after successive injections was not observed.

Comparison of VITC analysis in LH-plasma (as recommended by the kit manufacturer) and serum tubes is shown in figure 1. In general, correlation between serum and LH-plasma was high (R2 = 0.9941). Interestingly, after 24 h storage of separated samples at room temperature, decrease of VITC was significantly (p < 0.001) higher in serum than in LH-plasma (Figure 2A). 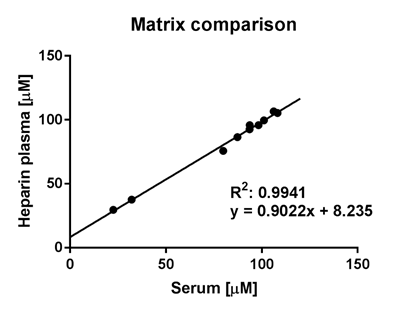 As shown in Figure 2B, decrease in VITC concentration over time was comparable if LH-plasma or serum was stored at 4 °C. Whereas storage at -20 °C during 7 days induced a significantly stronger decrease in concentration of VITC in serum tubes (p= 0.03, Fig 2C). Vitamin C concentration was decreased after multiple freeze thaw cycles if compared to storage conditions without freezing and thawing (Fig. 2D). 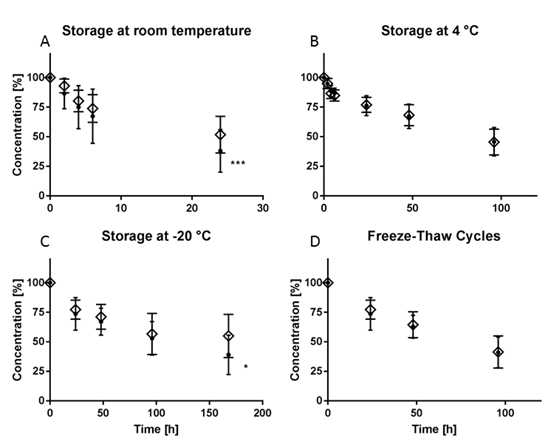 Decrease of VITC in serum and plasma at -20 °C was also observed if fast flash freezing in dry-ice-methanol mixture (-78 °C) was applied (Fig. 3A). VITC stability was enhanced over time in comparison to non-flash-freezing procedure. However, this difference was not significant (p = 0.10). Only when stored immediately at ‑80 °C, the concentration of VITC seemed to remain stable in both matrices over a period of at least 14 days without addition of stabilization reagents (Fig 3B). Unfortunately, -80 °C facilities are rarely present in smaller clinical laboratories or are not easily accessible during routine clinical work.

Stabilization of VITC is best done with DTT or its epimer dithioerythritol (DTE) [22]. DTT is also known as Cleland’s reagent and stabilizes VITC in its reduced form (Scheme 1) [26]. At the same time, DTT reduces DHA to VITC. Because of low levels of DHA in blood and immediate degradation to 2,3-diketogulonic acid, VITC restored from DHA is unlikely [27, 28]. The applied concentrations of 8 to 16 mM DTT did not show any detrimental effects, neither on the sample preparation nor on the chromatography itself. According to the kit manufacturer and reference institutes, lithium heparin plasma should be the matrix of choice for the measurement of VITC.[29, 30] Therefore, provided the better stability of plasma shown in our preliminary experiments, all further experiments were conducted using plasma samples. After physical separation of plasma from blood cells and addition of DTT, VITC concentration was constant for at least three days at 4 °C and seven days at -20 °C respectively. After seven days, concentrations in tubes stored at 4 °C were significantly (p = 0.0079) lower in comparison to tubes stored at -20 °C. These findings were in accordance with the results of Rossi et al. [22]. Remarkably, VITC levels were increased when DTT-stabilized LH-plasma was not separated from blood cells. After 48 h a significantly elevated concentration of VITC (p < 0.05) was observed if samples were stored in primary tubes (Figure 4). Interestingly, free hemoglobin concentrations also increased in primary tube samples stored with and without addition of DTT (data not shown) suggesting that VITC may be released from damaged red and white blood cells generating falsely elevated results. Similar observations were described before [31]. 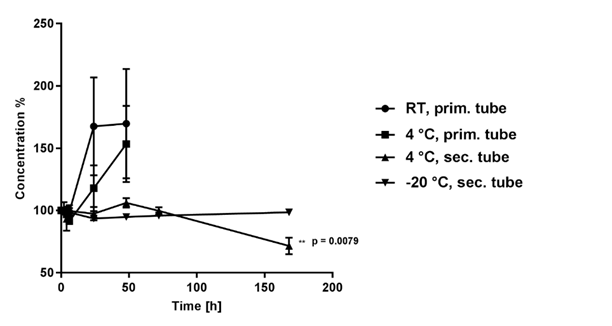 Furthermore long time storage of stabilized LH plasma samples at -20 °C was monitored. No significant decrease was observed in the first six months of storage. However, after twelve months levels of VITC were significantly lower compared to initial concentrations (Figure 5). 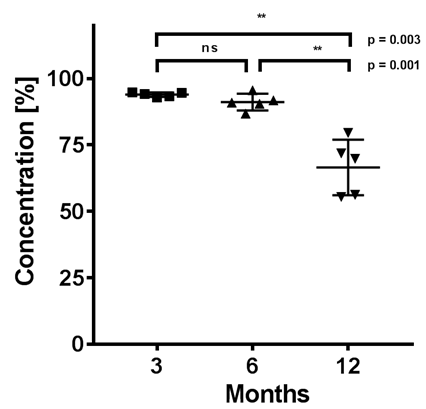 Under conditions of chemical protection by the addition of DTT, oxidative degradation of VITC was successfully inhibited up to six months. Afterwards, VITC concentration decreased substantially. Samples of patients are frequently collected without the addition of protective agents and stored for longer periods of time. Therefore, it has to be emphasized that long-term storage (> 6 months) should always be done at -80 °C. In this study, VITC levels in serum were constant up to two weeks if stored at -80 °C even without addition of chemical protection. These findings should be taken into account for daily clinical routine work as well as for clinical studies focusing on metabolomics. Oxidative decay not only affects VITC but may also alter concentrations of numerous other small molecules investigated in metabolomics studies. Therefore, analytical results may be strongly influenced by storage time and conditions and may not mirror the actual physio- or pathophysiological state. Our results underline the need of a quality control tool for the detection of oxidative processes in samples used for metabolomics studies as proposed by Trezzi et al. recently.[21]

Determination of VITC in human samples is still of widespread interest in the clinical practice and of crucial importance for patient health. Because of chemical reactivity, the preanalytical phase plays a pivotal role for an accurate VITC determination. Sample processing involves many pitfalls. In general, our findings show that decomposition of VITC is highly influenced by storage conditions and multiple freeze-thaw cycles. For ease of handling and processing, we recommend the use of lithium heparin tubes pre-modified with the addition of DTT. Chemical protection provides VITC stabilization up to six months when stored at -20 °C. Oxidative instability is not uniquely a matter of VITC determination. Especially in clinical studies evaluating new biomarkers, the in vitro interaction of small molecule metabolites with reactive oxygen species must be considered and may lead to result misinterpretation.

The authors would like to thank Patricia Keusch and Nina Baumann for their helpful support and fruitful discussions.