The seasonal fatty acid composition of farmed common carp (Cyprinus carpio) viscera, muscle, bones, and skin were determined in spring (March), summer (June), autumn (September), and winter (December) (% of total fatty acids). Palmitic acid (C16:0) and oleic acid (C18:1n-9) were the most abundant saturated fatty acid (SFA) and monounsaturated fatty acids (MUFA), respectively. Linoleic acid (C18:2n-6), arachidonic acid (C20:4n-6), docosahexaenoic acid (DHA), and linolenic acid (C18:3n-3) were the most abundant polyunsaturated fatty acids (PUFA). All tissues had a lower percentage of MUFA but higher PUFA in the summer in comparison to the other seasons. The results of principle components analysis (PCA) and cluster analysis (CA) suggested that summer common carp could be distinguished from other seasons, but the tissue source of the oil could not be determined.

It is well known that fish lipids are rich with long-chain n-3 polyunsaturated fatty acids (PUFA), especially eicosapentaenoic acid (EPA) and docosahexaenoic acid (DHA). Previous research indicated that these fatty acids could protect against coronary heart disease, cancer, and inflammatory diseases (Harris & Von Schacky, 2004), and support the brain development of infants (Ruxton et al., 2004). Some PUFA cannot be synthesized in the human body and must be obtained through the diet (Barceló-Coblijn & Murphy, 2009). Thus, consumption of fish rich in n-3 PUFA is essential for people’s health. Apart from sea species, freshwater fish are a very important source of PUFA as they are generally more capable of desaturating and elongating

However, no data was found in the literature comparing the fatty acid profiles of different tissues such as viscera, muscle, bone, and skin during the different seasons. Such data would provide more extensive nutritional information for consumers, especially about PUFA. Thus, this study investigated changes in the fatty acid composition of different tissues in farmed common carp at different seasons. The data were analyzed further using principle components analysis (PCA) and cluster analysis (CA).

The common carps (n=3 at each determination) were from the same farm and roughly the same size (weight 1400±110 g, length 42±3 cm) and age (2-3 years old). They had been raised on a commercial formulated feed in ponds. They were captured at random from the same pond at an aquafarm (Miyun District of Beijing, China), at the beginning of March, June, September and December, respectively, and then transported live to the laboratory by fish van in water with added dissolved oxygen and killed by blows to the head with a wood club. Samples of head, viscera (including all contents in the belly: heart, liver, gonads, spleen, intestine, stomach, swim bladder, kidney, etc.), muscle, bones (without fins) and skin were separated and homogenized with a tissue grinder at 20000r/min for 30s (FM200, Fluko Company, Shanghai, China). The remaining muscle on the bone and the kidney was removed as much as possible by scraping with a small knife. Then the samples were collected in polyvinyl chloride bags and stored at -20°C. They were thawed with flowing tap water for further analysis (within one week).

Using the method of Folch et al. (1957), samples (5 g) were extracted with a chloroform-methanol (2:1, v/v) solvent system for 24 h and then filtered with qualitative filter paper (102, Tezhong paper Ltd, Hangzhou, China). The filtrate was then added to 10 mL of distilled water, centrifuged at 2000 g for 10 min (TGL-16G, Pingfan Instrument, Shanghai, China) to obtain the chloroform-extracted fraction, and dried with nitrogen (purity ≥99.5% according to the manufacturer).

The FAME was prepared according to method 991.39 of the AOAC (2002) with some modifications. An extract of 0.1 g was added to 3 mL of 0.5 M NaOH/methanol in a boiling water bath for 10 min, followed by mixing with 5 mL of a boron trifluoride:methanol (BF3:CH3OH) mixture (14:86; v/v) (Sigma–Aldrich Corporation, St. Louis, MO, USA). Then the solution was heated in the boiling water bath for another 2 min and 5 mL of heptane (95%, Lanyi Chemical Products Corporation, Ltd, Beijing, China) added. The solution was allowed to cool to room temperature, and NaCl (3 g) was added to prevent emulsion formation. Finally, the heptane-extracted fraction (upper phase) was dried with nitrogen and stored at -20°C prior to the FAME analysis, a maximum of one week.

Using the method of Chen (2012) with modifications, the FAME were analyzed using a gas chromatograph (GC-8600 Beijing Beifen-Tianpu Analytical Instrument (Group) Co., Ltd., Beijing, China), which was equipped with a SPTM-2560 capillary column (100 m × 0.25 mm I.D.; Supelco, Inc., Bellefonte, PA, USA) and a flame ionization detector (FID). The fatty acids were identi?ed by comparing their retention times to that of a mixture of FAME standards (37 component FAME mixture, Supelco Inc.). The composition of the fatty acids was expressed as the relative percentage of the total fatty acids according to their peak areas. The relative content of each component was determined by the area normalization method and then calculated by the following equation: Area % FAX = [AX/AR]×100, where: FAX = fatty acid to be quantified, AX = area of the methyl esters X and AR = total area of the chromatogram (Memon et al., 2011).

Table 1 shows variations of SFA in the total lipids of the different tissues during the four seasons. There were no significant differences in the proportion of total SFA, ranging from 23 to 30% (P>0.05). The proportion of SFA was reported to be constant in several freshwater fish species, at around 25% (Kinsella, et al., 1978), which was in agreement with the present study.

Variations of MUFA (% of total fatty acids) in the total lipids of tissues are shown in Table 1. The content of total MUFA in common carp ranged from 25 to 47%. Sargent (1995) reported that MUFA were catabolized to provide metabolic energy during gonadal development, which might explain the reason why carp contained a lower percentage of MUFA in summer compared to other seasons (P<0.05). The present data indicated that the MUFA contents of carp viscera and muscle were higher than those of SFA in spring, autumn, and winter, which was consistent with the report of Yeganeh et al. (2012) for carp fillets.

The common carp had low levels of total n-3 PUFA (3.19-7.69%), but high levels of total n-6 PUFA (20.89-36.7%), which was in accordance with the study on fatty acid composition of other freshwater species (Kaneniwa et al., 2000). Tissues in summer contained more n-3 and n-6 PUFA in comparison to other seasons, and viscera and muscle had more n-3 PUFA content in summer compared with bones and skin (P<0.05). However, n-6 PUFA patterns were different. Bones and skin contained a higher proportion of n-6 PUFA during summer, whereas viscera and muscle did not. The unique PUFA composition of summer samples might be attributed to the different rearing environment in summer, such as higher water temperature; longer daylight hours; greater intake of feed by fish; higher activity of fish and so on.

3.4 Discrimination of tissues by seasons using PCA and CA

PCA calculation permits visualizing the contrast between different samples. The principal components (PCs) reflect the original data effectively if the cumulative proportion of the total variance in PC1 and PC2 reaches 70–85%. If not, PC3 and PC4 need to be added (Zhao et al., 2013).

In present study, the first four principle components (PC1, PC2, PC3 and PC4) represented 89.7% of the variability, with a consequent reduction in the dimensions of the data from 28 variables (the number of fatty acids) to 4 components. As can be seen in Fig. 1a, the first two principal components accounted for 68.1% of the total variance. Also, the variables with the highest and the lowest values for loadings in PC1 corresponded with C15:0 and C18:1n9, respectively. Regarding PC2, the more representative variables were C22:6n3 and C18:2n6. Those fatty acids are the best defined when extracting the first two principle components. Results of the score plot for the first two principal components showed a difference between summer and other seasons for the tissues (Fig. 1b). Fatty acids compositions in summer were separated from the other samples at the direction of PC1. However, the sample of muscle in spring also showed positive scores according to PC1.

As shown in Fig.2, the major fatty acids of tissues over the four seasons with high loadings in PC3 and PC4 were C16:1 and C20:4n6, which led to higher scores for tissues in spring compared with other seasons except for the viscera in summer. Samples in spring were separated from others due to their location in first quadrant. As may be seen, there was no clear distribution of scores based on the tissues.

CA was used to determine whether the analyzed samples belong to different groups according to the similarities in the characteristic values of the sample objects. The displayed cluster plot was used for a direct visual model of the relationship and diversity of the samples. The statistical study of the differences between clusters of different tissues for different seasons was carried out by independently analyzing each of their fatty acid compositions (Zhao et al., 2013).

As shown in Fig. 3, CA divided all tissues of common carp during the four seasons into five groups based on their average fatty acids profiles. Muscle in summer, viscera in summer, and muscle in spring were classified into a single group (group 1, group 2 and group 4, respectively). Bones and skin in summer belonged to group 3, and the remaining samples were in group 5. In addition, group 5 could be divided further into three groups: tissues (viscera, muscle, bones and skin) in winter; tissues in spring except for muscle, and tissues in autumn. Fatty acids compositions of tissues in summer were not in the same group as samples for other seasons, implying their unique characteristic, which was consistent with the principle components analysis in Fig. 1. Likewise, the outcome of the single grouping of viscera in summer and muscle in spring appeared to be consistent with the principle components analysis in Fig. 1 and Fig. 2, respectively.

Common carp in summer could be distinguished from other seasons based on fatty acids composition. The contents of fatty acids in common carp were normally: MUFA> PUFA> SFA except during the summer, when the order became: PUFA> SFA> MUFA for viscera and muscle and PUFA> MUFA> SFA for bones and skin, respectively. Considering the high amount of PUFA, common carp is best consumed in the summer. The viscera of common carp were a good source of PUFA, although these are normally not consumed. However, they might be extracted for use in fish oil capsules. Thus, fish oil from summer fish could be distinguished but the oil from the various tissues could not.

This study was supported by earmarked funds for the China Agriculture Research System (CARS-46). 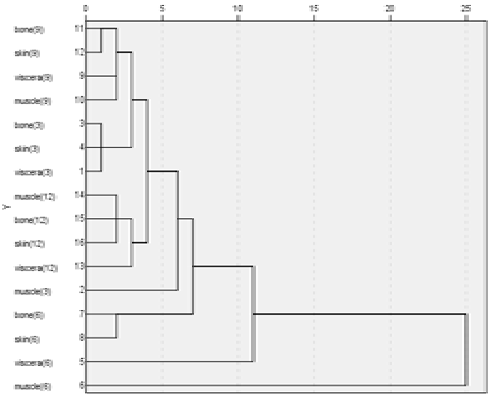