Soil salinization is an important ecological problem that seriously affects crop growth and reduces agricultural production worldwide. It is estimated that salinization affects 800 million hectares of land around the world to varying degrees. (Munns 2005).  A huge area of saline-alkali soil is mainly distributed in the northern part of China, with a total area of about 100 million hm2(Yuan et al. 2016). Recently, salinization is increasing rapidly due to the overuse of chemical fertilizers, poor irrigation practices, and industrial pollution (Yuan et al. 2016), while the availability of farmland has decreased due to urbanization and industrialization (Tan et al. 2005). The worldwide population has been increasing rapidly and is projected to reach 9 billion by 2050 (Fouilleux et al. 2017). Therefore, the mismatch between population size and the decreasing availability of cultivated land will become increasingly acute.

It is crucial to decipher the salt tolerance mechanisms of crops for breeding salt-tolerant crops which can be planted in saline-alkali lands (Hanin et al. 2016a). Salinity has three major negative effects on crops: water stress, ion toxicity, and secondary damage such as disturbing nutrient balance (Munns and Tester 2008). As the salt concentration in soil increases, the osmotic potential decreases, making it difficult for seeds and plants to absorb water from the soil, thereby impairing seed germination and growth. With increasing salt stress, harmful exogenous Na+ accumulates in the cytosol, leading to a series of disturbances such as enzyme deactivation, protein denaturation, and a decline in photosynthesis (Zhang et al. 2018). Therefore, salt stress inhibits crop growth and development, ultimately reducing crop production (Anugoolprasert et al. 2012).

Sensitivity to salt stress varies throughout the life cycle of a plant, with germination being one of the most sensitive stages. High germination ability is required to generate high yields in saline soils. However, salt stress significantly reduces the rate and percentage of germination, as it decreases the ability of plants to take up water, resulting in reduced growth rates and crop yield (Ding et al. 2018). For example, with increasing NaCl concentration, the germination rate, seedling length, and seed vigor of various maize (Zea mays) varieties decrease significantly (Khodarahmpour and Motamedi 2011). Salt stress also inhibits the growth and development of sunflower (Helianthus annuus) plants (Mutlu and Bozcuk 2007).

As a food crop, rice is very important in food safety in the world (Chattopadhyay et al. 2018). Due to its wide planting range, rice is often affected by various abiotic stresses, resulting in significant yield reductions (Chen et al. 2017). High salinity is a major factor restricting rice growth and reducing yield. Various methods have been used to evaluate salt tolerance in rice, including image-based phenotyping (Hairmansis et al. 2014), pot-culture (Kakar et al. 2019), genome-wide association (Li et al. 2019), clustering (Pongprayoon et al. 2019) and the membership function method (Liu et al. 2017). Most of these studies have focused on a simple analysis of several salt tolerance indexes in indica rice. By contrast, few studies have evaluated salt tolerance in japonica rice via multivariate statistical methods. There is currently no reliable indicator or formula for the rapid identification of salt tolerance in japonica rice.

In this study, 140 japonica rice cultivars with different genetic backgrounds were used for the germination experiments. The seeds were placed in a refrigerator after harvest in 2018 and stored at <4°C. Professor Xianzhi Xie of the Rice Research Institute of Shandong Academy of Agricultural Sciences kindly provided the rice seeds.

To determine a suitable NaCl concentration and culture time for evaluating salt tolerance in japonica rice, a germination test was carried out in a plant growth chamber using the salt-tolerant cultivar pokkali and the salt-sensitive cultivar Nipponbare. Twenty uniform, healthy seeds were soaked in 250 mL of distilled water for 24h and germinated on filter paper in 9-cm Petri dishes for 7 days in 1/4 Hoagland solution (pH 6.2) supplemented with 0, 100, 125, 150, 175, or 200 mmol L−1 NaCl. For the control group, seeds were treated with 1/4 Hoagland solution (0 mmol L−1 NaCl).

Seeds of the 140 japonica rice cultivar were grown in the presence of 0 and the optimal NaCl concentration (150 mmol L−1 NaCl) as described in Section 1.2. Seed germination was observed every day beginning at 1DAS. After 7 days of the treatment, the growth indexes of the seedlings were measured.

To evaluate the salt tolerance of each japonica rice cultivar at the germination stage, GR, SFW, RFW, TFW, SL and RL were determined. GR is calculated according to the method (Zheng et al. 2018).

To compare the growth parameters at 7 DAS, seedlings with health, uniform growth were selected for measurement of SFW, RFW, TFW, SL and RL.

Salt tolerance index (STI) is the ratio between the NaCl-treated value and control.

2.5 Hierarchical cluster analysis of physiological indicators of salt tolerance in japonica rice at the seedling stage

In order to quickly and accurately identify salt tolerance of the 140 japonica rice cultivars, hierarchical cluster analysis was performed. The cultivars were divided into four categories: HST, ST, WST and SS. The relationship between the mean MFV (dependent variable Y) and STI (independent variable Xi) of each cultivar was analyzed by multiple regression analysis with SPSS software. In addition, we established a mathematical model for the rapid and accurate identification of the salt tolerance of japonica rice: Y = β1X1+β2X2+ β3X3+ β4X4+ β5X5+ µ 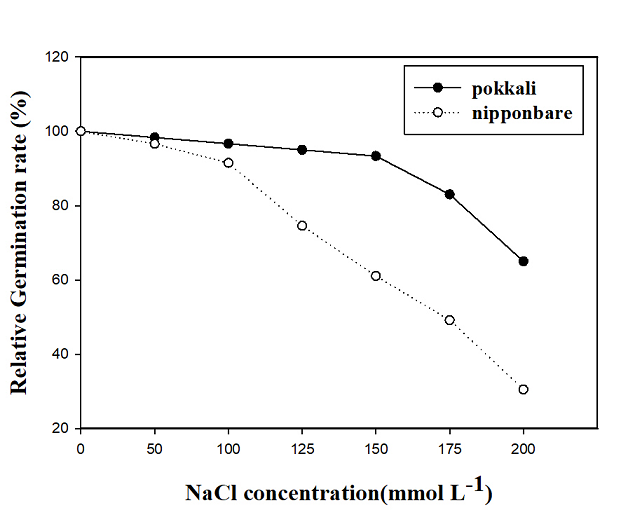 Figure 1. Relative germination rates of salt-tolerant (pokkali) and salt-sensitive (Nipponbare) rice under different NaCl concentrations. Data are the means of three replicates at each NaCl concentration. The GR of pokkali and Nip+ponbare was 100% and 98.33%, respectively, in the presence of 0 mmol L−1 NaCl. 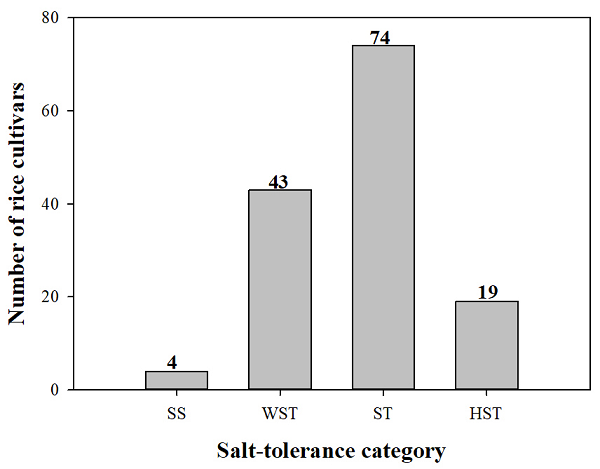 To verify the effectiveness of using mean MFV to evaluate salt tolerance in japonica rice, we evaluated the salt tolerance of a specific japonica rice cultivar using hierarchical cluster analysis based on Ward’s method (Figure 3). Two categories were divided at a Euclidean distance of 25. The first mixed category (I) was composed of ST and WST cultivars, and the second mixed category (II) was composed of HST cultivars. When the Euclidean distance was 6, the mixed category was further subdivided into three subcategories: WST, ST, and HST (Fig. 3). The number and names of the 140 japonica rice cultivars with different levels of salt tolerance differentiated by hierarchical cluster analysis under 150 mmol L−1 NaCl treatment are shown in Supplementary Table S2. 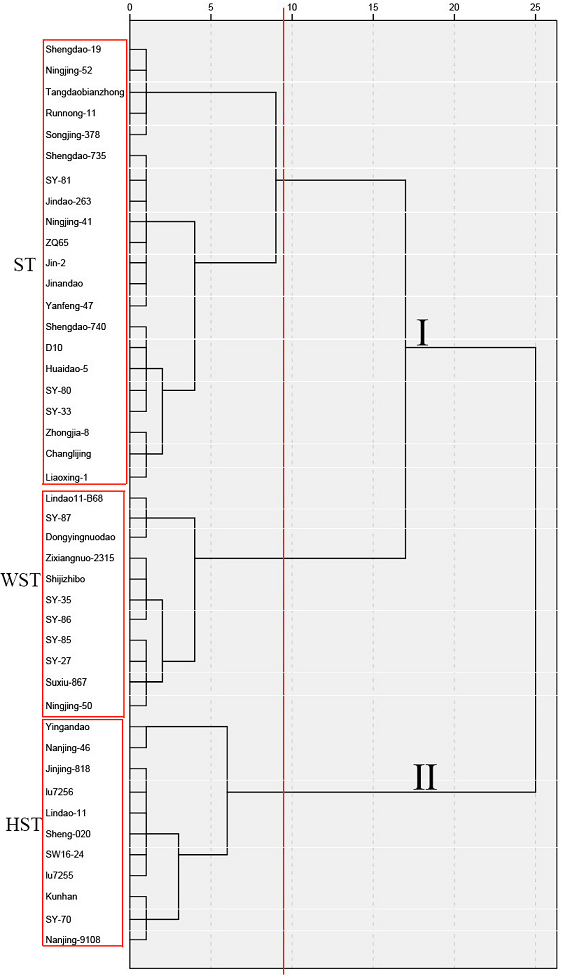 The physiological characteristics of the rice cultivars during the germination stage differed under salt stress compared to normal culture conditions. We therefore used correlation analysis between different physiological parameters to reveal whether and how these indicators are correlated to salt tolerance (Ding et al. 2018).

We recorded the RL, SL, RFW, SFW, and TFW of each japonica rice cultivar at 7 days of 0 and 150 mmol L−1 NaCl treatment (Table S3) and calculated the STI of each physiological parameter (Table S4). We conducted a correlation analysis to determine whether different physiological parameters were correlated under salt stress (Table 1). There was a significant positive correlation between any two of the STIs of RL, SL, RFW, SFW, and TFW. Furthermore, the highest correlation coefficient is between TFW and RFW, which is 0.92. The lowest correlation coefficient is between RFW and SL, which is 0.38.

**Correlation is significant at the 0.01 level (two tailed)

3.4 Establishment of a regression model and a reliable indicator of salt tolerance

We established a mathematic model to rapidly and accurately evaluate the salt tolerance of 140 japonica rice cultivars during germination stage. The mean MFV was taken as the dependent variable and the STI value of each physiological parameter as the independent variable for regression analysis. The optimal regression equation is: Y = −0.001+0.201∗STI of RL+0.516∗STI of SL+0.171∗STI of RFW+0.201∗STI of SFW+0.196∗STI of TFW (P < 0.01) (Table 2), here, Y represents salt tolerance of a specific rice cultivar and 0.201, 0.516, 0.171, 0.201, and 0.196 are the unstandardized coefficients of the STIs of RL, SL, RFW, SFW, and TFW, respectively. The random error term was −0.01. 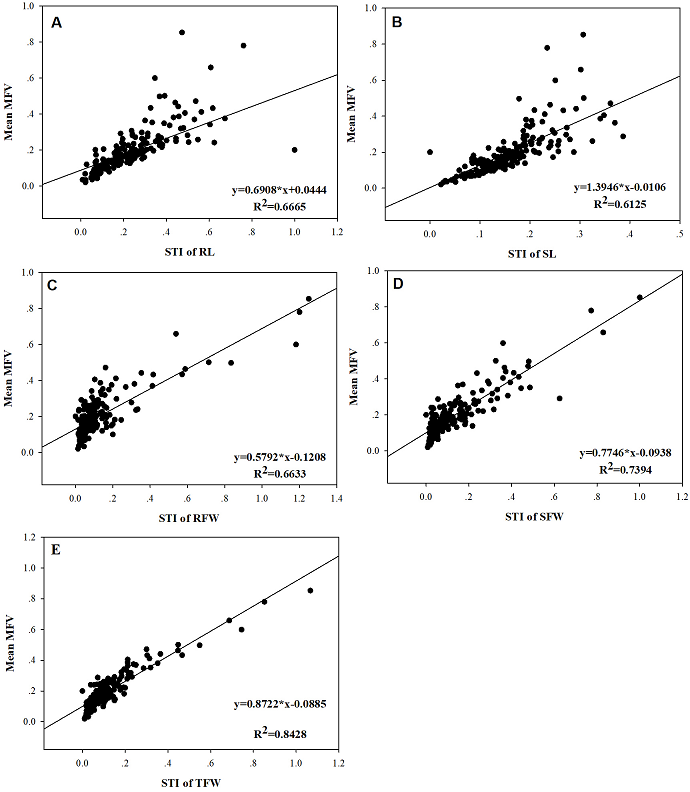 Direct seeding has become a popular rice planting method. Therefore, it is important to find a method to quickly and accurately assess the salt tolerance of japonica rice during seed germination. Relative salt damage rate was recently used to evaluate rice salt tolerance during the germination stage and the physiological parameters such as GR, RL decreased to varying degrees after salt stress(Zheng et al. 2018). Similar results were reported in soybean (Glycine max)(Chen et al. 2018; Cao et al. 2019; Tuyen et al. 2010; Jin et al. 2019), Arabidopsis (Orsini et al. 2010; Zhu 2000), sorghum (Ding et al. 2018), and other crops. However, which growth indicator is reliable and best reflects salt tolerance and how salt tolerance in a rice cultivar should be evaluated are still unresolved due to the small number of cultivars and inconsistency of physiological indicators and analysis methods. Convenient, effective, reliable salt tolerance indicators are the basis for accurately evaluating salt tolerance and for breeding salt-tolerant crops (Vitart et al. 2001).

Table S1. MFVs and evaluation of salt tolerance in 140 japonica rice cultivars at the germination stage.

BSW and XXZ designed the research. XJ and PM performed the experiments. All authors analyzed the data. XJ and BSW wrote the paper with contributions from the other authors. All authors have read and approved the manuscript.

Availability of data and materials

The datasets used and/or analyzed during the current study are included in this published article.

The authors declare that they have no competing interests.