The oil yield and physiochemical properties of Balanites aegyptiaca oil were investigated .The aim is to seek and established another seed oil as substitute to groundnut oil using local optimization approach as the locals. Balanites fruits were source from different locations within Yobe State, Nigeria. Fruits collected were crushed and the kernel extracted and dried. The kernels were subjected to three (3) different treatments of toasting at (50-70) 0c only for 20 -25 minutes, boiling at (100. 0c  for 25-30minutes) and toasting (45-50. 0c  for20-25 minutes)   and the third stage of treatments as soaking overnight at ambient temperature (34-35) 0c and toasting as well at (45-50 oc.for 20-25 minute). Toasted groundnut seeds were used as the fourth treatment and served as the control. The oil from the milled flour was mechanically expelled using centrifugal screw which is semi-automated for oil expelling from entrapped increase surface area. The oil yields from the roasted, boiled and soaked Balanites kernels were 50%, 26% and 21% crude oil yield respectively while the control (groundnut seed oil) had 23%. Physiochemical analysis of the oil samples from the varied process treatments of Balanites kernel revealed the moisture content of 0.05–0.059%, acid value of 4.44mg/KOH/g, saponfication value of 193.54 –198.81mg/KOH/g, iodine values of 64 – 80wijis, peroxide value of 4.40 – 61.20meq/kg, unsaponifiable matter of 0.0044 – 0.0070mg/KOH/g, free fatty acid of 1.085 – 4.22mgKOH/g, viscosity of 45 – 48.0mpa/s and refractive index of 1.502 – 1.8 at 360C. The results revealed that Balanites seed when boiled and soaked had better physiochemical properties than groundnut oil, however with low oil yield. This could provide good quality oil to food, pharmaceutical and for bioenergy generation industry.

Majority of consumable food stuff are made of oil derived from seeds or kernels or nuts together with proteins and carbohydrates (Manji et al., 2013). Oil derived from seeds, kernels and nuts are rich in protein and carbohydrate providing energy in form of fat (Onuekwusi et al., 2014). Physicochemical characteristics of oil are important determinant of its nutritional quality and commercial value (Omujal, 2008;Chapagain et al., 2009). For oil to be selected for use either for human or industrial purpose, it has to meet some basic physiochemical criteria.

In Nigeria, groundnuts oil and oil palm are the major source of edible oil used in cooking, manufacture of soap, margarine and cosmetics. However, there is an increase in demand which has necessitated importation of cooking oil from other part of the world. This called for research into indigenous oil-bearing fruit which can be exploited for production of oils, both for consumption and industrial applications. Balanites aegyptiaca generally referred to as desert date, is a multipurpose fruit tree commonly found in the arid environment. It was reported to have diverse application both in the area of nutrition and health (NRC 2008).

Investigation carried out by some researchers on yield and physicochemical properties of B. aegyptiaca oil had revealed the presence of oil which is rich and fatty acids of high stability (Chapagain and Wiesman 2005;Okia 2010;Manji et al. 2013;Gardette and Baba 2013). oil yield studies conducted on B. aegyptiaca kernel by Manji et al. (2013) and Okia (2010) revealed the kernel to contain 49.9% of oil and between 40 – 50% respectively while Chapagain and Wiesman (2005) reported oil yield of 46.12%, 44.17% and 39.20% from Israel, Africa and India respectively. The results from the different authors show variation in oil yield from different location. This implies that location possibly had influenced on yield though the variation might not be significant.  Physiochemical investigation on B. aegyptiaca oil from different researchers shows that the oil are of high stability and can compete favourably with vegetable oils like groundnut, palm kernel, castor oils (Okia 2010; Manji et al. 2013).  Most studies conducted on oil yield and physiochemical analysis on B. aegyptiaca used the standard method of oil extraction, though scientifically accepted but it is expensive and might not be affordable to the rural poor. Even studies that used the machine pressed method of oil extraction or mechanically expelled methods followed the process of seed processing/treatments such as the fruits crushing to obtain kernel – drying – toasting – grinding – addition of water – extraction of oil using machine. It is therefore imperative to conduct more investigation into techniques and processes that could result in better oil yield and better physiochemical properties of oil extracted from the kernel of B. aegyptiaca with the view of recommending affordable, accessible and improved process of processing kernels for oil extraction, this will helps in improving nutrition and income generation of the rural dwellers as well as boast the economy of the nation.

Forty five (45) kg of B. aegyptiaca fruits were collected from the villages around Gashua town and its suburbs. The fruits collected from all these locations were cracked manually to extract the kernels. The kernels were subjected to three (3) different treatments    of toasting at (50-70) 0c only for 20 -25 minutes, boiling at (100. 0c  for 25-30minutes) and toasting (45-50. 0c  for20-25 minutes)   and the third stage of treatments as soaking overnight at ambient temperature (34-35) 0c and toasting as well at (45-50 oc.for 20-25 minute)  The toasting only before milling and oil extraction, boiling and then toasting before milling and oil extraction and soaking overnight at ambient temperature before toasting and oil extraction had similar optimization as the control  . Toasted groundnut seeds were used as the fourth treatment and served as the control. The oil from the milled flour was mechanically expelled using centrifugal screw which is semi-automated for oil expelling from entrapped increase surface area. The flow chart of the treatments process is shown in Figure 1. 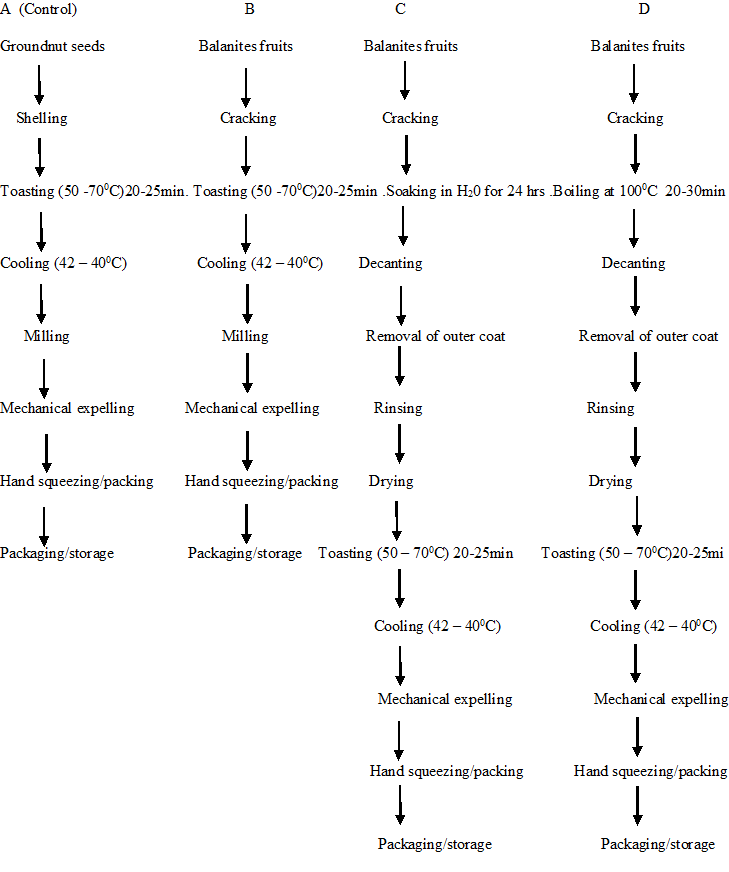 The oil yield from seeds of groundnut which is used as control was 23% while the oil yield of B. aegyptiaca for treatments A, B and C was 50, 26 and 21% respectively (Table 1). Oil yield extracted from B. aegyptiaca kernel toasted only (Sample B) was more than those soaked and boiled kernels before toasting (Sample C and D). This implies that toasting only yielded higher oil in comparison with the other treatments. The oil yield obtained from sample B is similar to that reported by Okia (2010) from samples sourced from Katakwi district in Uganda (50.56%) and Manji et al., (2013) who reported oil yield of 49.09% from samples sources from Adamawa, Nigeria but higher than Chapagain and Wiesman (2005) who reported oil yield of 46.12%, 44.17% and 39.20% from Israel, Africa and India populations of B. aegyptiaca respectively. This indicates that yield obtained from toasted kernel using mechanical expeller results in higher yield than even those extracted from solvent method as reported by chapagain and Wiesman (2005). However, similar yield was reported by Okia (2010) who also used solvent extraction method. This implies that method of extraction alone might not be the only reason for the observed difference. The combined effects of source of the kernel (Variation in environment) and method of extraction could be possible explanation for the difference in yield. The oil yield from the (soaked) sample C and (boiled) sample D was lower than those reported in sunflower (35%), safflower (30%) and olive (30%), but compares well with and soybean (20%), cotton seed (15%) and more than that of corn (3.0 to 6.5%) (Alexander, 2009

Acid value tells of the quality of free fatty acid and extent of lipolytic hydrolysis in oil. Sample A oil had lower acid value of 1.18mgKOH/g compared with sample B, C and D which had acid value of 7.814mgKOH/g, 2.17mgKOH/g and 4.44mgKOH/g respectively. Sample B and D oil had higher acid value (1.53mgKOH/g) in comparison with that reported by Sara (2015) and Okia (2010). However, Sample C oil had similar acid value of 2.08mgKOH/g as reported by Babeker (2013).This indicates that control (sample A) will be more stable oil followed by sample C and B. From the acid value of sample C and D, if refined using caustic soda it could be used as cooking oil. Sample B could be used in industry and not for cooking because of its high phytotoxicity content.

Saponification Value observes oxidative measure on storage and level of deterioration in oil is assessed by saponification value. Sample B (193.54mgKOH/g), sample C (195.93mgKOH/g) and D (198.81mgKOH/g) had higher saponification value compare to control sample A (190.98mgKOH/g). However all the samples had lower value compared to the 224.63 reported by Sara (2016) but higher than 168.8 value from manji (2013) and 174.5 from Babeker (2013). The empirical observation confers that Balanites oil at these process treatments have high volatility, low molecular weight and can yield more energy on combustion than the control sample A, hence the potential to be used for biofuel production. Balanite oil at this crude state cannot be however use in soap making because it might have low emulsifying ability. These high saponification oil value indicates high proportion of fatty acid and inedibility of its oil except refined.

The control sample has high viscosity compare to sample B and sample D. This confers that sample A have more molecular weight, less impurity and less unsaturation level which implies it could be used for industrial applications. Soaked sample C oil have high lightedness than sample B oil but lower than control sample A.

Acid value tells of the quality of free fatty acid and extent of lipolytic hydrolysis in oil The control sample A (80.616wiji’) share similar value with the  roasted sample B (80.00wiji’s), but lower values were observe in sample C  (79.00wiji’s) and  D (64.00wiji’s) .The Balanites values were lower than those values reported by Sara (2015) as (122.43) and Okia (2010) as (98.28) respectively. There were however higher than 76.8wiji reported by Manji et al. (2013) and 56.8wijis reported by Babeker (2013). The value of Balanites oils samples indicates that these oils are not dry oils because of their average level of unsaturation and free fatty acids. These oils can be good raw material for vegetable oil base cream Odenude et al (2007). When purifies could become edible vegetable oil.

Refractive index measures the relative speed of light in air to oil sample, reflecting refractivity. This generally varies based on wavelength and temperature, degree and types of unsaturation, branching and purity. Sample A had Codex 1999 recommended value of 1.46 unlike sample B (1.8), sample D (1.04) and sample C (1.50). These characteristics in sample D and C implies that these oils could foul and is impure, it cannot be easily hydrogenated or isomerized until refined.

Peroxide Value indicates lipid peroxidation and generally crude oil have high peroxide values. Sample C oil had 4.40meq/kg peroxide value similar with sample A (4.50meq/kg). The value for sample B (25.14meq/kg) and sample D (61.21meq/kg) had far higher values from the control sample and sample C. The value observed from all the samples except for ample C had higher value compared to what was reported by Sara (2015) (1.18), Manji et al. (2013) (6.0) and Babeker (2103) (8.0). The soaked sample C value agreed with FAO/WHO (1994) standard of 10.0meq/kg peroxide values in oil suitable for consumption. The high value of peroxide in the other samples maybe as a result of contamination and may not be suitable for human consumption.

Free fatty acid confers specificity of free fatty acid in oil .The control sample had 0.50mgKOH value of free fatty acid similar to the soaked sample C (1.09mgKOH) but higher compared with the sample B (3.93mgKOH) and sample D (4.22mgKOH). These values were higher than 2.8 mgKOH and 1.84 mgKOH reported by Gutti et al (20011) and Manji et al. (2013) respectively. Sample B could be compare with the 3.17mgKOH reported by Sara (2015). Sample B and C may not be suitable for refining because loss of oils may be experienced. This is also an indication that linoleic acid concentration might be high which could cause spoilage

The authors acknowledged the grant received from The Tertiary Education Trust Fund (TetFund) through the Federal University, Gashua, Nigeria which made it possible to carry out this work.